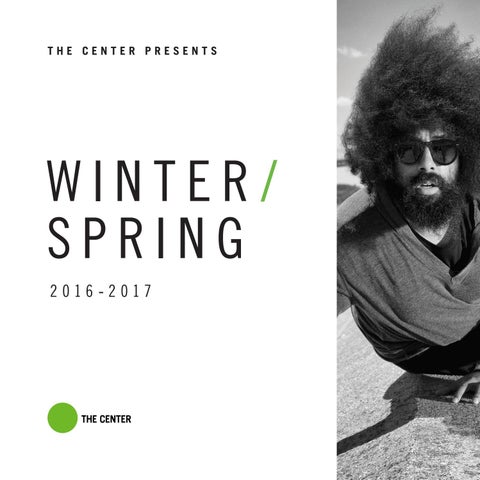 THE CENTER The Center is a hub for the artistic, cultural and creative activity in Jackson Hole.

Our team is fueled by innovation, inspired by collaboration and proud to share our 78,000 sq. foot campus with 19 inspired local, regional and state-wide non-profit organizations who call The Center home.

Center Presents Discover the extraordinary line-up of artists, musicians, and speakers taking the stage this season at The Center Theater.

National Theatre Live From Frankenstein to War Horse, experience the best of British Theatre right here at The Center.

Season Calendar Explore the enriching variety of programs and events coming this winter and spring to our creative campus.

Center Sponsors Meet the local businesses and organizations whose generous support made this season possible.

The Wood Brothers with Special Opening Guest Ben Sollee DEC 13 / 7 PM Dubbed “the masters of soulful folk,” The Wood Brothers released their debut studio album, Ways Not To Lose, on Blue Note in 2006. Chris Wood already had legions of devoted fans for his incomparable work as one-third of Medeski Martin & Wood, while his brother Oliver toured with Tinsley Ellis before releasing a half-dozen albums with his band King Johnson. Almost a decade later and with drummer Jano Rix added as a permanent third member, it’s become quite clear that The Wood Brothers have arrived. Known for a 360 degree approach to his art, Kentucky native Ben Sollee educates as much as he entertains through his innovative style as a cellist; conveying genre-bending songwriting through electrifying performances and non-traditional album presentation. His most recent music, Steeples Pt. 2 is the second of three parts in an album release of the same name. Portioning Steeples in this way, Ben is able to break the traditional album cycle and deliver a diverse array of content to his fans.

Rhythmic Circus! Red and Green DEC 27 / 7 PM Rhythmic Circus is a troupe of internationally renowned artists. Since their early start at a small theatre in northeast Minneapolis, they have grown into an international sensation touring to over 100 cities worldwide. Although the company’s official inception was in 2007, the troupe’s core members have been choreographing and performing together since 2000. No stranger to the spotlight, they were featured on Twin City Public Television’s MN Original, collaborated with Vocal Essence in Witness: A Tribute to Duke Ellington at the Ordway Performing Arts Center and appeared in the Crash Bang Boom! Festival at the Minnesota Orchestra Hall. The company’s repute goes well beyond the sum of the dancer’s talents; themed pieces include costume changes and musical segues that highlight the funky styling of a seven-piece band. With their combined and highly integrated talents, the dancers and musicians are known for leaving audiences on their feet and dancing in the aisles.

Lukas Nelson + Promise of the Real DEC 29 / 7 PM Much like their music, the lineup iterations for Lukas Nelson and friends are constantly evolving. Anthony LoGerfo, Corey McCormick and Tato Melgar are the core of Lukas Nelson & Promise of the Real, with Lukas’ brother Micah Nelson serving as a guest and honorary member. Micah was part of the recording of Something Real and often joins on the road when not fronting his own band Insects vs. Robots. Additionally, Lukas, Anthony, Corey, Tato and Micah are always present in the Promise of the Real part of Neil Young + Promise of the Real. Occasionally, Lukas finds himself in an acoustic-only pairing with Shooter Jennings, and their cover of “Mammas Don’t Let Your Babies Grow Up To Be Cowboys” is actually the theme song for Netflix’ new series The Ranch starring Ashton Kutcher and Danny Masterson.

An Evening with Anders Osborne, Jackie Greene, and Hayes Carll JAN 15 / 7 PM Between the potency of his richly detailed songwriting, his intensely emotional, soulful vocals and his piercing, expert guitar work, New Orleans’ Anders Osborne is a true musical treasure. He is among the most original and visionary musicians writing and performing today. Guitar Player calls him “the poet laureate of Louisiana’s fertile roots music scene.” Back to Birth – Jackie Greene’s seventh album is more than worthy of some serious attention. Armed with a persuasive voice, a vivid songwriting skill and an instinctive mastery of several instruments, Jackie Greene has carved out a unique musical niche, and the album marks another creative landmark in his already compelling body of work. Hayes Carll’s new album Lovers And Leavers defies the expectations of those who might have seen him as a next-generation Jerry Jeff Walker, writing songs of drunken missteps and failed romance. In comparison with some of Carll’s earlier work, Lovers And Leavers, produced by Joe Henry, is downright mature.

Seven Things Iâ&#x20AC;&#x2122;ve Learned: An Evening with Ira Glass JAN 21 / 5 and 8 PM Ira Glass is the creator, producer and host of This American Life, the iconic weekly public radio program with millions of listeners around the world. Using audio clips, music, and video, Ira Glass delivers a unique talk; sharing lessons from his life and career in storytelling: What inspires him to create? What drives his passion? How have failures and successes informed his decisions? During his presentation, Ira Glass will mix stories live onstage and help his audience better follow the creative process of one of our foremost storytellers.

The Moth Mainstage JAN 29 / 7 PM Beyond theater, The Moth Mainstage is a community where entertainment and enlightenment merge. The Moth began on a back porch in small-town Georgia, where its founder— poet and best-selling novelist George Dawes Green—would spend sultry summer evenings swapping spellbinding tales with a small circle of friends. There was a hole in the screen, which let in moths that were attracted to the light, and the group started calling themselves The Moths. When he moved to New York City, George wanted to recreate the feeling of those nights in his adopted city. The first New York Moth event was held in George’s living room. But word spread fast, and the events soon moved to cafes and clubs throughout the city—and soon to be popular venues throughout the country and beyond.

An Evening with Jake Shimabukuro FEB 3 / 7 PM Jake Shimabukuro can still vividly remember the first time he held a ukulele, at age four. It was an encounter that would shape his destiny and give the world one of the most exceptional and innovative uke players in the history of the instrument—an artist who has drawn comparisons to musical titans such as Jimi Hendrix and Miles Davis. Of course, Shimabukuro would end up performing on many of the world’s most renowned stages. Starting his career in Hawaii, he took his inspiration from some of the islands’ great uke players—Eddie Kamae, Ohta-San and Peter Moon. But he quickly expanded his scope from there, drawing influences from across the musical spectrum.

Reggie Watts MAR 4 / 7 PM Reggie Watts is an internationally renowned vocal artist, beatboxer, musician, and comedian who wows audiences with his completely improvised live performances. Using his formidable voice, looping pedals, and his vast imagination, Reggie blends and blurs the lines between music and comedy. No two performances are the same and to that end, ”genius” is the word most often used to describe him. LA Weekly crowned him “the most wildly inventive new talent of the past five years” while New York Magazine hailed Reggie as “Spectacularly original.” Rolling Stone featured him as “Hot Comedian,” SPIN named him as “Best New Comedian” and the LA Times praised “Reggie is a superstar.”

Elephant Revival MAR 12 / 7 PM A haunting sound, at once evocative and mysterious, ushers in Petals, the latest album by Elephant Revival. Notes rise and suffuse the silence; are joined by a deep bass drone, a quiet pulse of cello and a percussive tick: daybreak made music. That first sound on the lead track, â&#x20AC;&#x153;Hello You Who,â&#x20AC;? is a steel guitar, and its cinematic swell foreshadows the exploration of new territory by this beloved Rocky Mountain ensemble. A new band member and the introduction of instruments like the pedal steel and the cello into their already impressive treasure trove of strings and percussion are just the beginning. Petals embodies a deepening, as the quintet dives into themes of loss and rebirth, time and memory, love unbound by body or farewell.

National Theatre Live Experience a groundbreaking initiative to broadcast productions from the London stage to screens in cinemas and art centers around the globe.

An Evening with Anders Osborne, Jackie Greene, and Hayes Carll

000TICKETS ON SALE AT JHCENTERFORTHEARTS.ORG00

The Wizard of Oz

000TICKETS ON SALE AT JHCENTERFORTHEARTS.ORG00

James and the Giant Peach Jr.

Water by the Spoonful

CENTER SPONSORS The Center presents a wide variety of programs each year for the enjoyment of the Jackson Hole community. Offering these high-caliber events is possible only with the help of Center Friends and Sponsors â&#x20AC;&#x201D; ticket sales alone do not cover the costs of these performances.

BECOME A SPONSOR Interested in becoming a Center Sponsor? Get in touch! The Center Fund can be reached by phone or e-mail at 307.734.8956 and ponteir@jhcenterforthearts.org.

EE THE CENTER BOX OFFICE EE The Center Box Office is located on campus at 265 South Cache Street in downtown Jackson. It is open for business and customer support Monday through Friday, 12 - 5 PM and two hours prior to ticketed performances. Tickets to events at The Center can be purchased through The Center Box Office (307.733.4900) or online at jhcenterforthearts.org.

President of The Center Fund

Discover the extraordinary line-up of artists, musicians, and speakers taking the stage this season at The Center Theater.

Discover the extraordinary line-up of artists, musicians, and speakers taking the stage this season at The Center Theater.