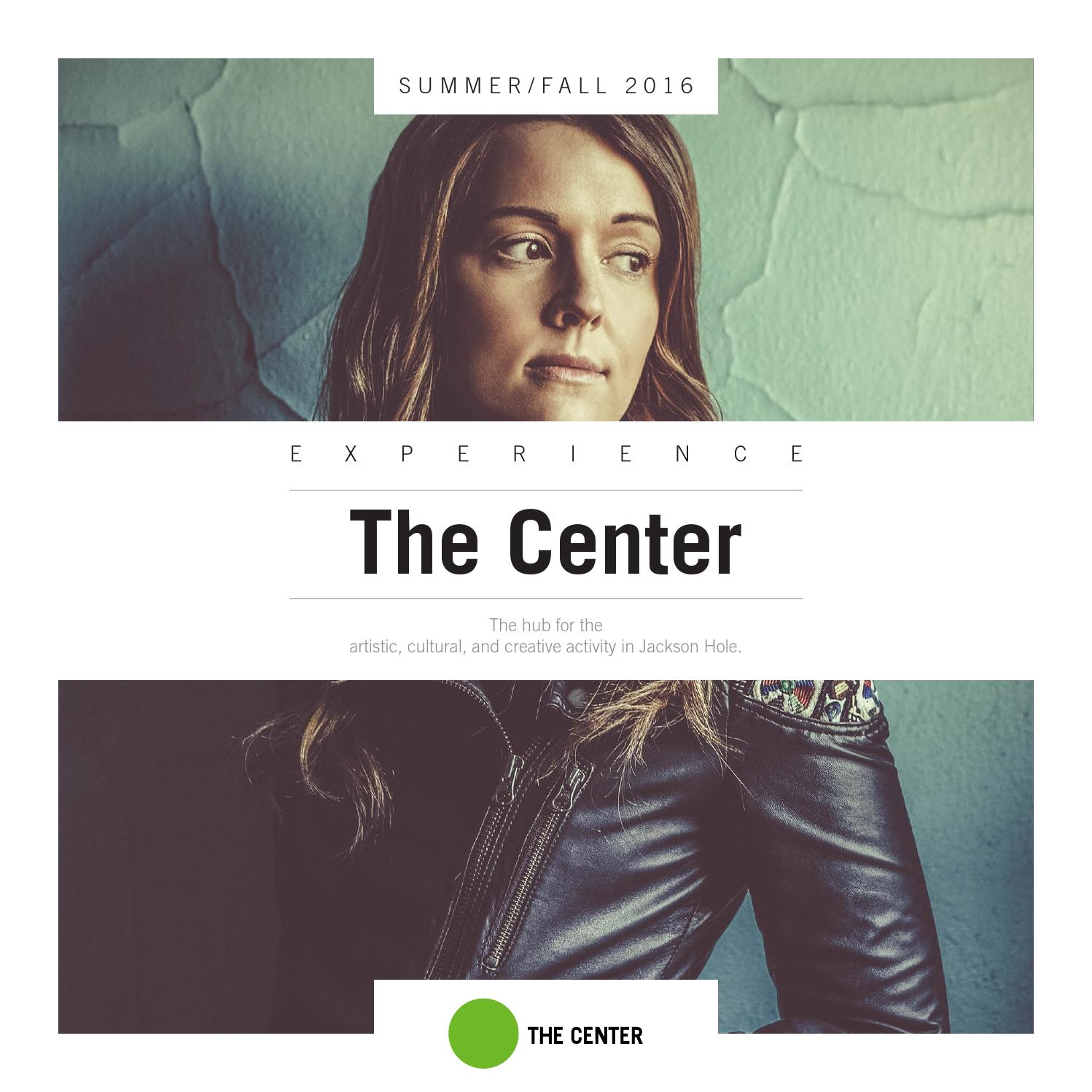 Center for the Arts Summer-Fall 2016 Brochure

from Center for the Arts

The Center The hub for the artistic, cultural, and creative activity in Jackson Hole.

Meet the star-studded line-up of musicians, storytellers, and speakers taking the stage this season at The Center.

18 — ART IN PUBLIC SPACES — Along with exhibitions, this program produces intimate art talks with guest artists, opening receptions and community outreach opportunities throughout the year. Work is displayed in a variety of spaces throughout The Center’s campus including The Center Theater Gallery, The Center Courtyard, and The Center Sculpture Pad.

Contents 20 — SEASON CALENDAR — Explore the artistic, cultural, and creative opportunities coming this summer and fall to our community campus.

24 — CENTER SPONSORS — The Center presents a variety of programs each year for the enjoyment of the Jackson Hole community. Offering these high-caliber events is made possible with the help of our corporate sponsors -- ticket sales alone do not cover the cost of these performances.

NEAL CONAN Renowned NPR host Neal Conan returns to Jackson to present a two-part presentation in The Center Theater. Topics of discussion will include the US-China Standoff in the South China Sea and the 2016 Electoral Cycle. A question and answer session and public meet and greet will follow.

MARC BROUSSARD Marc Broussard is a Louisiana-born singer and songwriter whose style is best described as Bayou Soul, a mix of funk, blues, R&amp;B, rock, and pop, matched with distinct Southern roots. Marc is best known for the songs “Where You Are” and “Home.” Broussard previously released several independent efforts, including 2002’s “Momentary Setback” that spawned the hit “The Wanderer,” a song about selfdiscovery. A re-worked version of the song appears on Carencro.

THE CENTER PRESENTS THE W. KAMAU BELL CURVE: ENDING RACISM IN ABOUT AN HOUR

W. KAMAU BELL Comedian, Political Satirist, and Host of CNN’s show United Shades of America socio-political comedian W. Kamau Bell has emerged as the post-modern voice of comedy. Named an Ambassador of Racial Justice by the ACLU, his weekly half-hour FX comedy series, Totally Biased with W. Kamau Bell, premiered in August 2012 and became a critically acclaimed but criminally short nightly show in September of 2013 on the new comedy network FXX. The NY Times called Kamau “the most promising new talent in political comedy in many years.”

BRUCE HORNSBY &amp; THE NOISEMAKERS Bruce Hornsby’s work displays a creative iconoclasm that’s been a constant in the artist’s two-and-a-half decade recording career. His commercial stock soared early on, when “The Way It Is”–the title track of his 1986 debut album–became one of the most popular songs on American radio. Despite his early mainstream successes, Hornsby has pursued a more personal, idiosyncratic musical path, focusing on projects that spark his creative interest, including collaborations with the Grateful Dead, Spike Lee, Ricky Skaggs, Don Henley, Ornette Coleman, Bob Dylan, Bela Fleck, Bonnie Raitt, Pat Metheny, and Robbie Robertson.

MARTIN SEXTON Remember that mix tape your friend made you way back when—­the one that’s etched in your soul? Martin Sexton’s new album Mix Tape of the Open Road is that musical cross ­country trip, blazing through all territories of style, as you cruise through time and place. This record is a charm bracelet of twelve gems all strung together with the golden thread of what Rolling Stone calls his “soul marinated voice.” Sexton will perform tunes from Mix Tape as well as your favorite Martin classics.

BRANDI CARLILE Through the years, Carlile’s music has been categorized in several genres, including pop, rock, alternative country, and folk. Carlile said of her style, “I’ve gone through all sorts of vocal phases, from pop to blues to R&amp;B, but no matter what I do, I just can’t get the country and western out of my voice.” Brandi Carlile has released six albums including The Story, Give Up the Ghost, and Live at Benaroya Hall with the Seattle Symphony, the last reaching number 14 on the Top Rock Albums chart. Carlile’s latest album The Firewatcher’s Daughter garnered her further acclaim and a GRAMMY Award nomination. The evening’s festivities include a pre-show reception in the lobby and a DJ After Party hosted by The Scout Guide.

THE CENTER PRESENTS THE B-SIDE PLAYERS: A TRIBUTE TO CURTIS MAYFIELD

THE B-SIDE PLAYERS The B-Side Players are a 9-piece band part of a new movement in popular music. A band that honors the international cross-pollination that has always made music the universal language. They use any beat that catches their ear, regardless of geography or genre, to create a compelling, horn driven polyrhythmic groove. They continue exploring the multifaceted grooves of Latin America and the Caribbean, incorporating the sounds of Cuba, Jamaica, Mexico and Brazil with the funk, rock, jazz and hip-hop rhythms of their homeland, dropping bits of Cumbia, Salsa, gritty street Samba, Son Montuno, Jarocho and Boogaloo into the mix.

SHAWN COLVIN &amp; STEVE EARLE Shawn Colvin and Steve Earle first met nearly three decades ago as Colvin opened a solo acoustic performance by Earle at Northampton, MA’s beloved Iron Horse. The two proved fast friends, collaborating occasionally over the years until finally teaming up for 2014’s “Songs and Stories, Together Onstage” tour, a sold-out run that saw the duo uniting for one-of-a-kind evenings of song-swapping, duets and storytelling. The shows were so exceptional Earle immediately proposed he and Colvin record an entire album together in the spirit of the tour. The album reveals a truly collaborative creative partnership, with each singer/songwriter contributing verses, melodies, choruses, and chord progressions.

9/8 KELLER WILLIAMS &amp; LEO KOTTKE Singer/songwriter/multi-instrumentalist Keller Williams recently announced the debut of “Shut the Folk Up and Listen” with flat-picking guitarist Leo Kottke. The very special evening of music, which will feature a solo set by each artist, finds Keller performing a rare loop-less acoustic show. Kottke is known for his finger-picking guitar style and his masterful combination of blues, jazz and folk. Williams is known for energetic live performances that include his original songs and selected covers. Attendees can also expect spontaneous collaborations between Williams and Kottke.

THE CENTER PRESENTS THE HOOTENANNY

UNBROKEN GROUND &amp; HARVESTING LIBERTY The future of farming. Regenerative farming and food - with discussion led by Ian McGregor of Slow Food in the Tetons and Nona Yehia of Vertical Harvest.

THE SUBDUDES Over the course of 25 years and ten albums, the Subdudes have quietly become one of America’s national music treasures. The New Orleans-formed group is a living encapsulation of American music, a vibrant cauldron of sounds that stirs together meaty grooves and jazzy dynamics, soulful R&amp;B swagger, easy vocal harmonies, cheeky rock ‘n’ roll attitude and folky social consciousness — not to mention some of the sharpest musicianship

and ensemble playing you’ll ever hear from any five musicians.

THE CENTER PRESENTS THE SUBDUDES

With sardonic wit and incisive social critiques, David Sedaris has become one of Americaâ&amp;#x20AC;&amp;#x2122;s pre-eminent humor writers. The great skill with which he slices through cultural euphemisms and political correctness proves that Sedaris is a master of satire and one of the most observant writers addressing the human condition today.

DOKTOR KABOOM! Doktor Kaboom! is an interactive one-man science variety show suitable for school and family audiences. Creatively blending theatre arts with the wonders of scientific exploration, Doktor Kaboomâ&amp;#x20AC;&amp;#x2122;s supercharged (and super safe!) science experiments will have you erupting with laughter and bubbling with curiosity. Nothing says science like KABOOM! Lookout! Science is Coming! combines the high energy interactive comedy your audiences have come to love, and another explosive lineup of science routines tying directly to core curriculum content standards!

Claudia Bueno In 2015, Claudia Bueno completed a month-long residency with Teton ArtLab. Her enigmatic personality and enthusiasm for the community are two reasons that Center for the Arts and Teton ArtLab partnered to bring Ms. Bueno back to install a larger scale commissioned work. The piece involves wire netting and a specialized lighting system. The installation process will incorporate

organizations like Children’s Learning Center, Camp Jackson and the Senior Center of Jackson Hole. Bueno will also be leading an artist professional development workshop while in Jackson. The work will culminate at the final reception with a celebration of art, dance, music, and more.

WENDELL LOCKE FIELD &amp; MIKE PIGGOTT Wendell Locke Field and Mike Piggott, two accomplished painters of the greater Teton Area, turn their attention to printmaking for a first ever dual-show of their work. These two artists, whose studios are in the so-called Big House across from Center for the Arts, embrace different printing process. “The uniqueness of each artist is boiled down to the plate, whether it’s one plate, or 25,” explains Piggott. “And it’s refreshing. You think differently about painting after you’ve been forced into the methodical precision of print making.” “Prints” by Wendell Locke Field and Mike Piggott will be exhibited from July 20 - August 22 in The Center Theater Gallery.

STEVEN GLASS Steven Glass is a mixed media artist that paints on glass, cardboard and wood with supplies typically found in graffiti, such as spray paint, paint markers, and streakers (oil sticks). His work reflects a bright color palette and compelling motifs of a featureless face, a chain link fence, eye glasses, and dots.

in The Center Theater Gallery.

The Center Presents: Bruce Hornsby and The Noisemakers August 2 | 8:00 P.M. | The Center Theater

The Center Presents: The Hootenanny September 12 | 7:30 P.M. | The Center Theater

Vanya and Sonia and Masha and Spike October 28 | 6:00 P.M. | The Black Box Presented by: Off Square Theatre Company and The Russian Club

Vanya and Sonia and Masha and Spike October 29 | 6:00 P.M. | The Black Box Presented by: Off Square Theatre Company &amp; The Russian Club

PRESIDENT OF THE CENTER FUND

Board of Directors Don Opatrny CHAIR

Thank You Volunteers Many thanks to our dedicated volunteer ushers who play a vital role in the success of programming on our creative campus.

The Center Fund The Center Fund was established in 2014 to address The Center’s fundraising needs. Current priorities include repayment of the organization’s outstanding debt from its capital campaign, growing the annual fund, and building endowment in support of programming and facility maintenance. 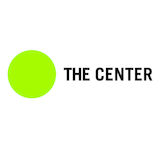 Center for the Arts Summer-Fall 2016 Brochure

Meet the star-studded line-up of musicians, storytellers, and speakers taking the stage this season at The Center.