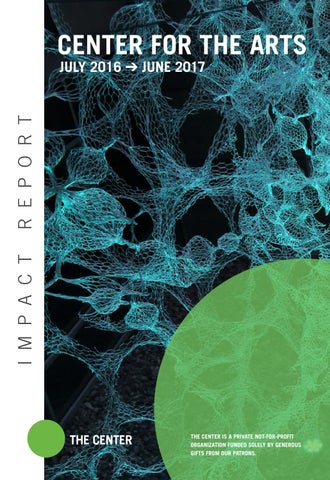 THE CENTER IS A PRIVATE NOT-FOR-PROFIT ORGANIZATION FUNDED SOLELY BY GENEROUS GIFTS FROM OUR PATRONS. 1

WE ARE A HUB FOR THE ARTISTIC, CULTURAL, AND CREATIVE ACTIVITY IN JACKSON HOLE.

SM OOTH CHANG E IN L E ADERSH IP The Center was fortunate that Don Opatrny joined its board in 2011. He has been tireless in stewarding The Center from its nascent beginnings to a vibrant hub that meets the essential cultural needs of our community. During his tenure, Center

As evidence of her dedication to our mission

about 200 nights per year. Mr. Opatrny has

Ms. Brown states, “I am passionate about

served as Chairman since 2012 and after six

the arts and the outstanding work that the

valuable years of service will “term off the

Center’s Staff, Board, and Residents do to

foster the arts in our community. The Center plays a fundamental role in Jackson’s culture

While it’s hard to say goodbye to a valued

board member, The Center is pleased to

one of the best places on Earth!”

announce that Valerie Brown will assume the helm. Raised in Pocatello and Boise, Idaho,

Last year The Center was granted a 99-year

Ms. Brown has been coming to Jackson

lease. To guarantee vibrancy for another

since 1962, began living here part-time in

2007, and relocated here permanently with

Board of Directors, will steward the continued

her husband in 2014. She has been actively

proper care of our building and campus,

involved in charitable organizations with

emphasis on the arts. Akin to Don Opatrny,

for our Resident Partners, and attract

Ms. Brown has an extensive professional

high-quality artists for our suite of creative

background in financial services and

offerings. The Board of Directors is made up

currently serves as the Executive Chairman of

of 21 committed members of our community

Advisor Group Holding Company. She is an

esteemed member of C200, an invitation-only

Creative Initiatives The Center’s Creative Initiatives program strives to support and inspire the artistic community in greater Jackson Hole. Our Campus Exhibitions program, our many Collaborations, the Center Presents shows in the Theater and our new Creative in Residence program enhance the creative vibrancy on our campus. is a ra k

We embarked on an exciting new initiative called the Creative in Residence program. This residency provides support and space for guest artists to delve into an interdisciplinary process, resulting in an impactful and inspiring end product. 2017 Creatives in Residence, Matthew Day Jackson, Camille Obering and Andy Kincaid, presented Observatories an exhibition of sculpture, video and performance art activating The Center Park. Using the eclipse as a metaphor, the team aims to illuminate aspects of Jackson Hole as representative as “the last of the old west.” The constituent forms and images which create the illusion of the “West” often ofuscate that which they purport to represent. Observatories will offer viewers new ways of interpreting the past and present from which to consider the future of this community and its context.

CAMPUS EXHIBITIONS Campus Exhibitions add visual vibrancy to The Center by supporting and showcasing a diverse group of artists bringing life to our Center spaces.

• Twelve youth art projects were featured in the

an array of mediums by incredible local artists and Resident organizations. • Fifteen lunch Artist Talks and ten specialized workshops were attended by local artists, Camp Jackson campers, Children’s Learning Center students and our Jackson community. • Our annual Art and Healing program features work by Tamara Ashburn King whose paintings grace the walls in the St John’s Professional Hospital Building and reach beyond our physical campus. • PacMAN loyally stood on the Cache side of our campus for a year greeting each individual who entered The Center’s music wing.

Center Collaborations support outstanding programming on our campus based on creative merit, shared audiences, resources and risk. For the 2016/17 fiscal year The Center has been a collaborative partner within five excellent programs. • Commissioned FractaLife by Venzuelan light artist, Claudia Bueno and established an annual collaboration with Teton Artlab. • Committed to a 5 year partnership with Off Square Theatre. to support Thin Air Shakespeare in The Center Amphitheater each summer. • Supported an augmented reality project featuring Zenka, a sculptor and futurist with Jackson Hole WILD. • Coproduced the Art in Translation exhibition and outreach program with Art Association of Jackson Hole and Think WY. • Featured young poets in the first Teen Poetry Slam with JH Writers leading up to the JH Writers Conference. 5

WHAT DOES IT MEAN TO BE A CENTER RESIDENT? — DISCOUNTED THEATER AND SPACE RENTAL — PARTNERING OPPORTUNITIES TO PRESENT PROGRAMMING WITH THE CENTER — AN ARTFUL AND CREATIVE WORK ENVIRONMENT — USE OF THE CENTER THEATER LOBBY, GALLERY SPACE,

THESE NON-PROFITS ARE INDEPENDENT OF THE CENTER. PLEASE CONSIDER SUPPORTING THEM.

19 4 In collaboration with our Resident Partners and others, our theater was busy over 194 nights with events ranging from spoken word to dance to music to film.

10 0 The Center is honored to have close to 100 volunteers who are committed to making our campus thrive. Last year, our allstar volunteers contributed more than 6,240 hours of volunteer service worth $147,014.

23 The average ticket price for all events ticketed through The Center Box Office is $23 (not including The Centerâ&#x20AC;&#x2122;s Annual Benefit)

4 Operating surplus for the fourth year in a row.

56 Center Presents is funded by the generous annual support of 56 local business sponsors. Offering these high-caliber events is only possible with the help of our sponsors -- ticket sales alone do not cover the costs of these performances.

Center Sponsors The Center presents a wide variety of programs each year for the enjoyment of the Jackson Hole community. Offering these high-caliber events is possible only with the help of Center Sponsors Â­â&#x20AC;&#x201D; ticket sales alone do not cover the costs of these performances.

How did you end up in Jackson?

the physical, spiritual and intellectual well-being of

the communities. The Bank gives 2% of its pre-tax

dollars back to the communities we work in – we

recognized an opportunity in this market that could

strongly encourage our employees to get out in the

better First Interstate Bank as a whole. We have

community and volunteer their time to the projects

embraced the Jackson lifestyle and love where

that speak to them. Our Foundation gives $10 to the

our children go to school, the active, philanthropic

non-profit for every hour an employee volunteers as

community, and the lifelong friends my wife, Jen,

well as matches any dollar donations our employees

and I have made.

make to non-profits in the community.

What do you most want people in Jackson to know about First Interstate Bank?

Why have you chosen to support The Center?

It is and always has been a community bank first.

house themselves in The Center – it’s a place for

We employ approximately 1,700 people in our

members of our community to congregate, celebrate

and learn together. My family and I love attending

the communities in which they live and work as

the diverse events that occur at The Center – we are

demonstrated by volunteer hours in excess of

so lucky to have a community center like Center for

the Arts in our valley.

Why do you feel it is important to reinvest in the community? First Interstate Bank is acutely aware that the quality

If you could have coffee with any past or present Center Presents performer, who would it be and why?

of life in a community is measured not only by the

Mike Super, the magician – my kids and I LOVED

health of its businesses, but is inherently tied to

We admire the diversity of the organizations that

Center Friends We are pleased to thank our generous Center Friends whose sustaining gifts “keep the lights on” and support the general operations of our creative campus.

DURING THE SUMMER MONTHS, WE TURN OUR BUILDING’S BOILER OFF AND WE USE BIODEGRADABLE CUPS AT ALL OF OUR EVENTS. –––––– WE USE LED LIGHTING IN OUR THEATER AND STAIRWELLS TO REDUCE ENERGY CONSUMPTION. –––––– WE HAVE RECYCLING BINS PLACED THROUGHOUT OUR CAMPUS TO ENCOURAGE “GREEN” DISPOSAL OF GLASS, PLASTIC, AND PAPER WASTE.

We would appreciate your feedback regarding any possible omissions or errors. Please contact The Center Fund with any concerns at (307) 734.8956. 15

Center for the Arts Impact Report

Center for the Arts Impact Report