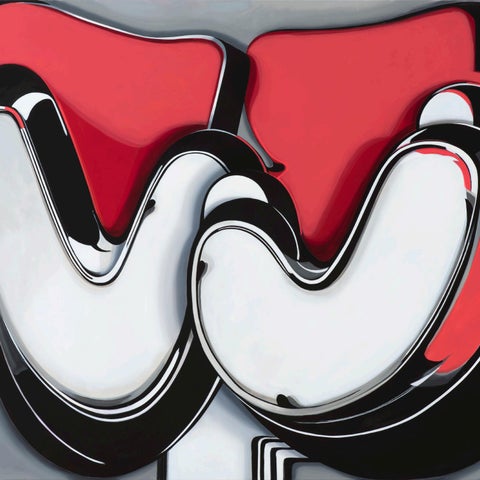 fluidity. Reminiscent of Modigliani’s voluptuousness stripped of figurative connotation, her luxurious overlay of form and virtuoso use of colour is paradoxically best described as sculptural, and calls to mind the organic abstraction of Jean Arp. Separated tonally by line and colour, floating in, around and over each other, her merging and elegantly parting shapes are like the translucent liquids of a lava lamp as they begin to warm and perform. The epitome of lyricism, Hagerty’s paintings express the artist’s vision and imagination through the sublime beauty of harmonious form. Hagerty’s studio bears all the hallmarks of an artist dedicated to experimentation. Large paintings leaning against the walls dominate a space filled with sketch-books, reference books and works in progress that might signal possible new directions or at least diversions. A series of small constructivist statuettes including the shadowy figurines of Heinrich Himmler and his daughter inspire discomfort, however, it is the corpulent constructs of Hagerty’s paintings that constantly overwhelm the field of vision. In a studio that tells a story of Rubenesque refinement it is no surprise that Hagerty actually views her work as figurative. Her organic abstracted forms are also stylised bodies, imagined as models, and this explains the essence of her practice. Like another of her significant influences Francis Bacon, flesh lies at the centre of her oeuvre. The second overlapping stream in Hagerty’s ouvre is connected to constructivism with narrative tones and oblique architectural quotation from the curvaceous structures of modernist architects such as Harry Seidler and Oscar Niemeyer. In Hagerty’s recent plane girls (2015) series for instance, she conjugates female form and the machinery of flight in a feminist take on the mythology of ‘man and machine’: as if to ask; were women independent of machinery? In these often smaller, succinct, sometimes threedimensional works, she modernises the characteristic styles of Alexander Rodchenko and Hannah Hoch to fashion revolutionary statements for the 21st Century.

While Hagerty wears allusion on her sleeve she has also created a practice that is in no way derivative. The clarity of her curvature and dazzling palette distinguish one fold of ‘flesh’ from another and stylistically distance her practice from its sometimesgrotesque Absurdist and Dadaist sources without completely losing their atmospheric concentrate. The occasional ear or leg (or part thereof), the appearance of an incomplete face or crosses over eyes, remind the viewer of artistic lineages while also asserting the work as distinctively Hagerty in its multi-referential nature. Like Surrealism, Dada, (or Monty Python) it is not without eccentric disposition in a dark space. Both streams of Hagerty’s practice reference the other, working together in the formation of one unique expression. The symbiosis of collage and painting rendered with Hagerty’s acute sense of organic form literally seal the space occupied by her paintings in deep red, black and blue and imbue each work the sense of being alive. This idea is taken one step further in black, white, red mobile (2015) produced with the late Robert Foster, a piece that brings together Hagerty’s sophisticated sense of construction with the anodised sensibility of F!NK + Co whose design might also be described as organic. In an era dominated by digital photographic media; of light, movement and speed, Hagerty’s work could be viewed as a consequence of Futurism, occupying a zone that evokes the history of 20th Century art while settling emphatically on the Post-Modern turmoil of the 21st. David Broker, October 2016 Marie Hagerty is represented by Olsen Irwin, Sydney, and Karen Woodbury Gallery, Melbourne

The history of portraiture has been framed by distortion and delusion. Even photographic portraits will often reflect how we would like to be seen rather than how we actually look. Almost Illegible is the latest installment in Tony Curran’s history of experimentation with the portrait in which he has called to question every aspect of the relationship between artist and subject - a relationship as old as the history of art. In this new exhibition Curran presents portraits as paintings, as digital video and drawings. With each step he closes in on details of the original imagery while moving further away from the tradition of a “good likeness”. It is significant that, notwithstanding David Hockney and Lucien Freud, Curran cites variously abstract influences such as Jan Arp, Sol LeWitt, and Sean Scully; and yet he never quite abandons the special affiliation between artist and sitter. In a series of five paintings the faces of subjects are integrated with what appears to be a chaotic mire of brightly coloured abstract forms. While figuration is almost overwhelmed

by the advance of abstraction, the traditions of likeness, however faint, remain within the work. Each face, emerging or disappearing, is like a vestige of Curran’s developing processes that have determinedly disrupted the curious conventions of portraiture. In Stay (2012) he invited members of the public to stay in the Wagga Wagga Gallery to have their portrait painted, firstly on an iPad, to be uploaded to a Flickr page for participants to download. Importantly in projects such as this Curran is not simply capturing and manipulating an image of the sitter but ultimately a whole community. Curran’s paintings are transcribed from their digital source where his intitial encounter with the sitter is essentially photographic in that the first steps rely on technology. Digital colours are carefully matched to pigment colour in the production of compositions where figuration and abstraction are delicately balanced and based on the ‘performance’ that takes place during the making of a portrait. The sitter is not necessarily still and their movement might be incorporated into the image along with marks that represent a true rendition of the artist’s experience of meeting and engagement with the sitter. Thus the works have immediacy, a life that is communicated to the audience via the arrangement of colour, form and figuration. Works on paper in paint and oil pastels are related to the portraits in that they focus on the details of what happens during production and thus they comprise a data-base mined from marks produced in the portraits. Creating his own App, Curran created a personal archive where each individual shape and colour performs a “composition generator” that is predominantly abstracted while remaining true to the form of original meetings and impressions. After multiple sittings with individuals the database of gestural information on people under observation creates what Curran refers to as “an impotent form of big-data surveillance”.

Developing an entire practice around the deconstruction of portraiture it is important to note that Curran does attempt to capture that elusive essence of the character before him. What sets him apart is the many ways he finds to achieve this end and present the results â&#x20AC;&#x201C; successful or not. His portraits are exercises in edge-blurring not only between figuration and abstraction but also in his use of media or technologies. While Almost Illegible questions the limits of representation, it also collapses notions of hand-made and machine-made. Curran would prefer that his audience struggle to distinguish between drawing, painting and computer application. Setting the scene for disintegrating genres he also dexterously denies his tools the powers of exclusive expression. In doing so his exhibitions assure audiences that in the hands of an intrepid innovator, painting and drawing have vital new roles to play within the dynamic biosphere of new technologies. David Broker October 2016

Since his graduation from Queensland College of the Arts, Griffith University in 2014 Vanghoua Anthony Vue has maintained a practice that reflects aspect of his life from ancestry to day job. Equally comfortable inside and outside art galleries Vue’s work draws upon his Hmong heritage, reworking the colourful and complex weaving patters of his ancestors who have inhabited a vast area in the South of China (Yunnan), Northern Thailand, Vietnam and Laos. The Hmong people are known to take great pride in their traditional crafts and Vue has inherited this element of the culture, however, as a young man growing up in Australia he also questions tradition and its employment in contemporary cultural practices. With a ‘Do It Yourself’ ethos he has been influenced by his father’s home projects, his job at Bunnings and frequent visits to second hand outlets, reassigning a vast array of objects from cricket bats to door mats, with distinctive Hmong motifs. Vue has a passion for community projects, working both solo and collaboratively in centres across the country weaving the Hmong experience into Australian culture with florescent paper cut outs, duct tape and black lighting.

Ci-Lines is an installation that story of Hmong refugees who fled to camps in Thailand in the aftermath of the Second Indochina War. Using fluorescent Builders Line on the four black walls of The Cube, Vue has drawn a map of the Phetchabun Refugee Camp, the last of its kind in Thailand. Before its closure a number of family members were interned in this camp and the installation recognises their suffering from a distinctly personal point of view. With pulsating ultra violet lighting the map is animated, resembling a living organism whose story is interpolated by a video screen, acrylic text panels and paper cut outs. The video contains home movie scenes edited from the collection of Vue’s father who lived in this camp before immigrating to Australia and settling in Innisfail and Cairns, Queensland. Produced between 1992 and 1995 the footage focuses on tropical rainforests both in North Queensland and Laos, as well as scenes of refugees during this turbulent period. Returning to Laos with his father Vue developed attachment to the lands of his ancestors and on a periodically indistinct soundtrack, almost drowned out by the sounds of a motorboat on the Mekong River, Vue’s father reminisces with memories of the war and life on the river. Like the video, eleven panels with geometric patterns based on Hmong textile design and written language systems are situated within the map. It is on these panels that that traces of customary arts and crafts become apparent, however, Vue determinedly makes a radical departure from established ideas of cultural identity, craft and design. With industrial tape, and comic strips from Mickey Mouse and Monsters Inc. he has written a proverb that reflects the Hmong experience of adapting to the new cultural situations they find themselves in: “Live in their world, imitate their skill, live in their land, imitate their kind.” The proverb conveys a story of survival and explains the diversity of Hmong cultures across China, Vietnam, Laos and Thailand, cultures further adapted as refugees are faced with assimilation in countries such as Australia and the U.S.A.

The panels are a remarkable examples of the ways that Vue has approached a heritage that is distant yet fundamental. Incorporating a passion for popular culture, experimentation with industrial materials, DIY techniques and street arts, his exhibitions and public projects often have the ambience of a rave party. It is the intense colours of Hmong clothing, which has been eagerly absorbed by fashion houses of the world, that drive the overall disposition of Vueâ&#x20AC;&#x2122;s comprehensive practice. Club atmosphere, however, is tempered by the acknowledgement of critical issues facing Hmong people in many parts of the world. Audiences are constantly reminded of the plight of refugees and characteristic paper cut-outs repeated throughout the installation are designed for this purpose. A white silhouette of a man on his knees, borrowed from an iconic photograph by journalist Philip Blenkinsop, who discovered a Hmong community still on the run in the Laotian jungle in 2003, almost 30 years after the war, transports the viewer back to harsh reality. Believing that they had finally been saved the refugees fell to the ground and wept. With this poignant image amidst pulsating light effects, vibrating colours, stories of survival and the ongoing hope of successful resettlement, Vue notes that as long as any Hmong people remain in refuge there will be a part of himself with them. David Broker October 2016

CCAS IS SUPPORTED BY THE ACT GOVERNMENT, AND THE AUSTRALIAN GOVERNNENT THROUGH THE AUSTRALIA COUNCIL, ITâ&#x20AC;&#x2122;S ARTS FUNDING AND ADVISORY BODY. 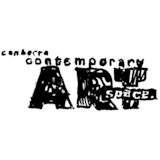