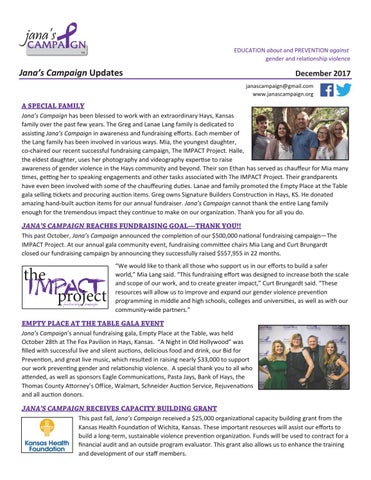 EDUCATION about and PREVENTION against gender and rela onship violence

A SPECIAL FAMILY Jana’s Campaign has been blessed to work with an extraordinary Hays, Kansas family over the past few years. The Greg and Lanae Lang family is dedicated to assis ng Jana’s Campaign in awareness and fundraising eﬀorts. Each member of the Lang family has been involved in various ways. Mia, the youngest daughter, co-chaired our recent successful fundraising campaign, The IMPACT Project. Halle, the eldest daughter, uses her photography and videography exper se to raise awareness of gender violence in the Hays community and beyond. Their son Ethan has served as chauﬀeur for Mia many mes, ge ng her to speaking engagements and other tasks associated with The IMPACT Project. Their grandparents have even been involved with some of the chauﬀeuring du es. Lanae and family promoted the Empty Place at the Table gala selling ckets and procuring auc on items. Greg owns Signature Builders Construc on in Hays, KS. He donated amazing hand-built auc on items for our annual fundraiser. Jana’s Campaign cannot thank the en re Lang family enough for the tremendous impact they con nue to make on our organiza on. Thank you for all you do.

JANA’S CAMPAIGN REACHES FUNDRAISING GOAL—THANK YOU!! This past October, Jana’s Campaign announced the comple on of our $500,000 na onal fundraising campaign—The IMPACT Project. At our annual gala community event, fundraising commi ee chairs Mia Lang and Curt Brungardt closed our fundraising campaign by announcing they successfully raised $557,955 in 22 months. “We would like to thank all those who support us in our eﬀorts to build a safer world,” Mia Lang said. “This fundraising eﬀort was designed to increase both the scale and scope of our work, and to create greater impact,” Curt Brungardt said. “These resources will allow us to improve and expand our gender violence preven on programming in middle and high schools, colleges and universi es, as well as with our community-wide partners.”

EMPTY PLACE AT THE TABLE GALA EVENT Jana’s Campaign’s annual fundraising gala, Empty Place at the Table, was held October 28th at The Fox Pavilion in Hays, Kansas. “A Night in Old Hollywood” was filled with successful live and silent auc ons, delicious food and drink, our Bid for Preven on, and great live music, which resulted in raising nearly $33,000 to support our work preven ng gender and rela onship violence. A special thank you to all who a ended, as well as sponsors Eagle Communica ons, Pasta Jays, Bank of Hays, the Thomas County A orney’s Oﬀice, Walmart, Schneider Auc on Service, Rejuvena ons and all auc on donors.

JANA’S CAMPAIGN RECEIVES CAPACITY BUILDING GRANT This past fall, Jana’s Campaign received a $25,000 organiza onal capacity building grant from the Kansas Health Founda on of Wichita, Kansas. These important resources will assist our eﬀorts to build a long-term, sustainable violence preven on organiza on. Funds will be used to contract for a financial audit and an outside program evaluator. This grant also allows us to enhance the training and development of our staﬀ members.

JANA’S CAMPAIGN TO HOST CAMPUS SAFETY SUMMIT WITH NATIONAL CONFERENCE Jana’s Campaign has partnered with the Genesis Women’s Shelter & Support and the Dallas (TX) Police Department to host a Campus Safety Summit in conjunc on with the na onal Conference on Crimes Against Women (CCAW). This 4-day conference takes place in Dallas, Texas and brings together thousands of professionals annually, from police oﬃcers to vic m advocates and other professionals who work in the field of gender-based violence. The goal of the conference is to provide the highest level of training, informa on and strategies to those who are responders and advocates to vic ms of crimes against women. TM

HEARTLAND CAMPUS SAFETY SUMMIT IMPACTS THE REGION Faculty, staﬀ and students from over 77 colleges, universi es and community organiza ons gathered at Johnson County Community College (KS) on November 15th and 16th to learn how they can be er reduce and respond to gender and rela onship violence on their campuses. More than 200 a endees from 12 states par cipated in the fi h annual Heartland Campus Safety Summit, hosted by Jana’s Campaign and Johnson County Community College.

JANA’S CAMPAIGN PARTNERS WITH FORMER BAYLOR UNIVERSITY TITLE IX OFFICIAL Jana’s Campaign has partnered with Pa y Crawford, the former Title IX Coordinator at Baylor University, to provide mul ple workshops in 2018 for colleges and universi es across the U.S. Crawford will serve as a featured speaker at the Midwest Campus Safety Summit in Muncie, IN, the Campus Safety Summit in Dallas, TX, the Rocky Mountain Campus Safety Summit in Colorado Springs, CO and the Heartland Campus Safety Summit in Overland, Park, KS. Pa y Crawford became the university’s first full- me Title IX Coordinator when she joined Baylor in November 2014. Frustrated with the lack of ins tu onal support, Crawford resigned two years later. Crawford is dedicated to ending corrupt prac ces and con nues to assist ins tu ons and organiza ons across the country with Title IX compliance and violence preven on. Crawford is well known na onally for exposing Baylor University’s prac ces that eventually led to Baylor’s sexual assault scandal. A er filing an oﬃcial complaint with the Oﬃce for Civil Rights (U.S. Department of Educa on), she resigned her posi on. This scandal led to several top Baylor oﬃcials losing their posi ons.

HUSCH BLACKWELL TO SPONSOR 2018 CAMPUS SAFETY SUMMITS Jana’s Campaign is pleased to announce that Husch Blackwell will be our featured 2018 Campus Safety Summit sponsor. Husch Blackwell is a li ga on law firm where they specialize in Title IX and Clery Compliance. As a sponsor of all three of our 2017 Campus Safety Summits, Husch Blackwell has also generously agreed to be the main sponsor for our now four summits in the year 2018. As a result of their sponsorship, we are able to keep the registra on fees extremely low, enabling campuses to send mul -disciplinary teams to a end, increasing the impact on every campus represented. In addi on to the monetary support, Husch Blackwell also brings a wealth of knowledge to the summits by giving several key presenta ons. Jana’s Campaign is grateful for all the support they provide and looks forward to this con nued partnership.

SECONDARY EDUCATION EXPANSION The impact of Jana’s Campaign in middle and high schools con nues to grow throughout the region. While we con nue our eﬀorts in Kansas, the scope of our work is expanding further into Nebraska, Colorado and Oklahoma. Working with teachers, administrators, parents, staﬀ and students, Jana’s Campaign has increased our reach to 8 states, 417 schools, and over 39,000 students! Using our comprehensive model, we oﬀer schools a tailor-made, mul -level preven on program that will meet the specific needs of their school. By providing classroom curriculum, teacher, administrator and staﬀ trainings, service project mini-grants, policy review and recommenda ons and much more, we are able to truly make a diﬀerence in preven ng gender and rela onship violence. All of these services are oﬀered at li le or no cost to the schools.

VERIZON FUNDS OUR COLORADO AND NEBRASKA WORK Jana’s Campaign, Inc. has received a $25,000 grant from Verizon Wireless-Hopeline to increase the scale and scope of our teen da ng violence preven on program in the region. The grant will fund comprehensive educa onal programming in middle and high schools throughout the states of Colorado and Nebraska. This is the second year that Verizon Wireless has funded Jana’s Campaign’s work in Colorado and Nebraska. These resources will be used to expand the organiza on’s teen da ng violence preven on ac vi es for students, teachers, coaches, parents and administrators to new communi es, as well as to provide enhanced services in communi es we’ve already impacted. The program’s ul mate goal is to help adolescents recognize and understand the diﬀerence between caring, suppor ng rela onships versus those that are controlling, manipula ng or abusive.

ENGAGING MEN AND BOYS IN GENDER VIOLENCE PREVENTION We at Jana’s Campaign recognize the importance of engaging men and boys in our gender violence preven on programming. Through our Man2Man and Coaching Boys Into Men (CBIM) programs, we address the dangerous and unhealthy side of masculinity. We call on all males to reject sexism and violence and encourage them to hold each other accountable. Jana’s Campaign co-founder, Curt Brungardt, is both a na onal trainer for the CBIM program and the developer and speaker for the Man2Man program. Over the last several months, he has conducted CBIM training workshops in Houston, Texas and Kearney, Nebraska. Addi onally, Man2Man presenta ons were held at Mercy College of Ohio, Iowa Western Community College, Garden City Community College (KS), Trego Community High School (KS) and Wichita County High School (KS). (CBIM is a program developed by Futures Without Violence.)

JANA’S CAMPAIGN TO IMPLEMENT PILOT PROJECT WITH HAYS (KS) HIGH SCHOOL Jana's Campaign is proud to announce a new program we are implemen ng at Hays High School (Hays, KS), Jana's alma mater. The Athletes as Leaders program is designed for high school athletes on girls' sports teams. The program aims to empower female-iden fied youth to take an ac ve role in promo ng healthy rela onships and ending sexual violence. Jana's Campaign is one of twelve pilot projects across the country. We are proud to be working with the publisher of this curriculum, the Harborview Center for Sexual Assault and Trauma c Stress, Sea le, WA, (a program at the University of Washington).

JANA’S CAMPAIGN EXPANDS WORK WITH NATIVE AMERICAN NATIONS Over the last several months, Jana’s Campaign has con nued to work with several Na ve American Na ons in Oklahoma. This last August, we conducted a Safe Dates curriculum teacher training with Riverside Indian School in Anadarko, Oklahoma. Then in October, we implemented several educa onal programs with the Muscogee (Creek) Na on and with the College of the Muscogee Na on in Okmulgee, Oklahoma.

2018 ANNUAL GIVING PROGRAM Annually, Jana’s Campaign seeks financial gi s and dona ons from our friends and supporters to provide the needed resources for us to serve our mission. Our financial founda on is built on (1) private gi s and dona ons, (2) corporate support and private founda ons and our own (3) earned income. Again, in 2018, we hope to raise $75,000 from private individual donors. All dona ons, large and small, are highly appreciated and go directly to our violence preven on programming. Jana’s Campaign is a 501 (c)(3) nonprofit charitable organiza on and contribu ons are tax deduc ble under sec on 170 of the Internal Revenue Service. 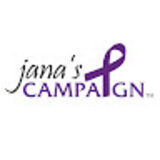