Guide to Religious Freedom and Law 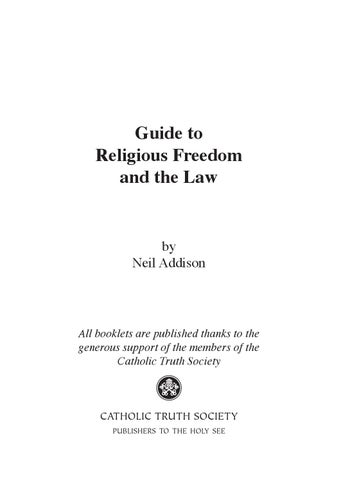 Guide to Religious Freedom and the Law

b. Guide to Religious Freedom and the Law.indd 1

b. Guide to Religious Freedom and the Law.indd 2

b. Guide to Religious Freedom and the Law.indd 3

Introduction This booklet is an attempt to provide information on aspects of the law relating to religious freedom and discrimination which are of specific interest to Catholic institutions and individual Catholics. It is not intended as a guidance on the totality of the law. There are a large number of books and official guidance covering discrimination and human rights law but the specific exemptions in the law which apply to religious organisations are often covered in a cursory way or relegated to footnotes. In this booklet by contrast the exemptions and how they apply is the main area of interest and for that reason it may be helpful to read this booklet in conjunction with those more general works. The list of websites provides access to some of these additional sources of guidance. This booklet deals with the legal situation in England, Wales and Scotland. The Human Rights Act applies in Northern Ireland but not the Equality Act 2010 since Northern Ireland, for historical reasons, has its own quite specific legislation dealing with religious discrimination. Though some of the information will, I hope, be of interest to those involved in education generally and

b. Guide to Religious Freedom and the Law.indd 4

Catholic schools in particular it should be noted that there is quite specific and complicated legislation applying to the various categories of state schools, private schools and religious schools which would justify a book on its own. For that reason I have not dealt in any detail with the subject of Catholic schools and instead recommend that those involved in education go to the guidance provided by the Catholic Education Service which is available at www.catholiceducation.org.uk or for Scotland the Scottish Catholic Education Service www.sces.uk.com. This booklet is aimed primarily at a Catholic audience however I hope that it will also be of assistance to members of other religions and Churches since many of the legal questions are common across religious boundaries. Though the booklet is designed to give legal advice it is not my intention to encourage litigation or â&amp;#x20AC;&amp;#x153;I know my rightsâ&amp;#x20AC;? confrontations. Recourse to the law and to litigation should be the very last resort of any individual. If at all possible disputes are best resolved through patient discussion away from the glare of publicity. Finally I am going to use this booklet to explode one persistent legal myth relating to the status of Catholics in the United Kingdom. Despite frequent assertions to the contrary there is absolutely no legal rule which prevents a Roman Catholic becoming Prime Minister or indeed any form of Government Minister. For historical reasons there are legal rules which prevent a Roman Catholic becoming

b. Guide to Religious Freedom and the Law.indd 5

Monarch or being married to the Monarch but there are no other legal restrictions preventing Roman Catholics playing their full part in British society. This booklet provides general guidance based on the law as it exists on 31st October 2013. Updates and developments in the law will be covered in my blog at religionlaw.blogspot.co.uk or at www.ThomasMoreLegal. org.uk Persons or organisations faced with specific issues or legal challenges are advised to take independent legal advice. Neither the author nor the publisher accept any responsibility for any action taken or not taken as a result of the information provided in this booklet. (The author regrets the necessity for this legal disclaimer but in an increasingly litigious world it is unfortunately necessary)

b. Guide to Religious Freedom and the Law.indd 6

General Principles of Discrimination and Human Rights Law Human Rights The Human Rights Act 1998 (HRA) made the European Convention on Human Rights part of UK law and it has become a very fundamental part of how law is applied and how public authorities approach their functions. The way the HRA works is twofold (i) All public authorities have to act in accordance with the articles in the Convention and can be directly sued if they interfere with any of the rights set out in the Convention1. (ii) When courts are interpreting any legislation or rules they have to have regard to the Convention and so far as possible they have to interpret the legislation or rules in a way that is consistent with the rights set out in the Convention2. The Convention is divided into a number of Articles which set out various rights. Those Articles which are especially relevant in relation to religious freedom are:

b. Guide to Religious Freedom and the Law.indd 7

Article 8 (Right to Private Life) Article 9 (Freedom of Religion) Article 10 (Freedom of Speech) Article 11 (Freedom of Association) Each of these rights are what are known as “qualified rights” and what this means is that restrictions on the exercise of the rights can be lawful. Each of the Articles is in two parts, paragraph 1 stating the right and paragraph 2 setting out what restrictions are acceptable. The restrictions differ in detail between the various Articles but all follow the same pattern in that any restriction must be: 1) “prescribed by law, and 2) necessary in a democratic society i) in the interests of public safety, or ii) for the prevention of disorder or crime, or iii) for the protection of health or morals, or iv) for the protection of the rights and freedoms of others The phrase “prescribed by law” does not apply only to legislation but can apply to any lawful rule. A lawful rule is any rule which an individual or organisation has the legal right to impose so, for example, where a school lays down rule relating to school uniform these qualify as rules “prescribed by law”3, similarly a “Code of Conduct” set out in an employment contract is a rule “prescribed by

b. Guide to Religious Freedom and the Law.indd 8

law”. If someone breaches such a clear rule then the HRA may not help them unless it can be argued that the rule is not “necessary” for the prevention of disorder or crime, the protection of health or morals, or the protection of the rights and freedoms of others. However if there is no specific rule laid down then the particular human right in question cannot be interfered with. Discrimination Anti-discrimination law used to be set out in a number of different pieces of legislation dealing with the different types of discrimination (Race Relations Act, Sexual Orientation Regulations, etc.) but these are now all unified in the Equality Act 2010 (EA). The EA works by setting out a number of “protected characteristics” which a person may have and for which they cannot, in certain circumstances, be discriminated against. Protected characteristics are4: age disability gender reassignment marriage and civil partnership pregnancy and maternity race religion or belief sex (i.e. Gender) sexual orientation

b. Guide to Religious Freedom and the Law.indd 9

A person may have more than one “protected characteristic” e.g. a black, Roman Catholic woman can be discriminated against because of her colour, her religion and her sex, all of which are protected characteristics. The EA prohibits discrimination both in employment and in the provision of “services”. However, it should be noted that not all the “protected characteristics” are equally protected in both situations. The provision of “services” is a broad term but it has never been suggested in any court case or government guidance that the provision of sacraments or sacred services is governed by equality laws. Such services are, by definition, not something anyone is entitled to as a matter of right and in addition they are protected by Article 9 as being “manifestations” of religion. For example refusing to give Communion to a non-Catholic, or indeed a non-Christian, is not unlawful nor would it be unlawful to refuse to give a blessing to a relationship which was contrary to Catholic teaching. It is also an internal matter for the Church to determine whether a person is or is not a “Catholic” for the purposes of receiving Communion, a blessing, etc. Where such questions may arise they should of course be dealt with in a sensitive and pastoral way and in accordance with canon law of the Catholic Church but they are nevertheless theological decisions which fall outside the jurisdiction of secular state law.5

b. Guide to Religious Freedom and the Law.indd 10

b. Guide to Religious Freedom and the Law.indd 11

Guide to Religious Freedom and Law