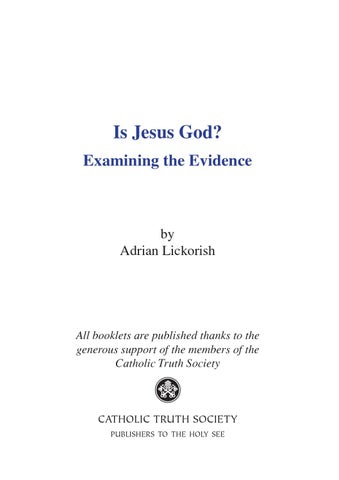 b. Is Jesus God FINAL.indd 1

Is Jesus God? Examining the Evidence

b. Is Jesus God FINAL.indd 2

Introduction I believe in one Lord Jesus Christ, The only begotten Son of God, Born of the Father before all ages. God from God, light from light, True God from true God, Begotten, not made, consubstantial with the Father. (The Nicene Creed)1 Christians come in all shapes and sizes, with different beliefs and practices, conduct and interests. But there is one constant: if you are a Christian, you believe that Jesus is God, one of the three persons of the Trinity. Is that a reasonable belief? Can someone of good intelligence, open mind and enquiring spirit, acquire, hold and defend that belief today? The burden of this booklet is that there are powerful reasons and convincing evidence, readily understood, to support the belief that Jesus is God, one of the three persons of the Trinity. A succinct summary of the reasons and evidence, with sufficient detail to allow the reader to form a view, is set out here. The books which the author found helpful, setting out the material in far greater depth and detail, are listed under Bibliography and Further reading.

b. Is Jesus God FINAL.indd 3

This booklet concentrates on the divinity of Jesus. Reasons of space and focus mean that it deliberately does not seek to extend its scope to an examination of the concept of the Trinity.

b. Is Jesus God FINAL.indd 4

Did Jesus live at all? Not even the Jewish and pagan antagonists who attacked Christianity and Jesus himself entertained the thought that he never existed. (Bart D. Ehrman)2 From time to time since the eighteenth century (and not infrequently today) someone suggests that Jesus never lived. He is a myth. A figure like King Arthur or Robin Hood, encapsulating hopes and dreams, but of no reality. The answer is that there is clear evidence, from outside Christian sources, that Jesus did exist at the time claimed by the New Testament. The evidence records Jesus as a teacher and miracle worker, who was crucified under Pilate and whose followers regarded him as Christ. Josephus Josephus was a Jew, a Pharisee, an author, a man who worked closely with the Romans, a man who knew and was a pensioner of the Emperor Vespasian. Josephus was born in AD 37 and died about AD 100. One of his works is the Antiquities of the Jewish People, completed in about AD 93 (about two years before the Apostle Johnâ&#x20AC;&#x2122;s death). In this work Josephus makes two references to Jesus.

b. Is Jesus God FINAL.indd 5

b. Is Jesus God FINAL.indd 6

The shorter reads: [The high priest Ananias] “convened the judges of the Sanhedrin and brought before them a man named James, the brother of Jesus, who was called the Christ, and certain others. He accused them of having transgressed the law and delivered them up to be stoned.”3 The longer reference reads: About this time arose Jesus, a wise man [if indeed it be right to call him a man]. For he was a doer of marvellous deeds, and a teacher of men who gladly receive the truth. He drew to himself many persons, both of the Jews and of the Gentiles. [He was the Christ]. And when Pilate, upon the indictment of the leading men among us, had condemned him to the cross, those who had loved him at the first did not cease to do so, [for he appeared to them alive on the third day - the godly prophets having foretold these and ten thousand other wonderful things about him]. And even to this day the race of Christians, who are named from him, has not died out.4 The words in square brackets are of uncertain authenticity. Even disregarding them, the extract is evidence for Jesus as a teacher, a “doer of marvellous deeds”, with followers before and after his death, who was crucified under Pilate.

b. Is Jesus God FINAL.indd 7

Pliny the Younger Pliny the Younger (c. AD 62-113) was the governor of the Province of Bithynia. He wrote to the Emperor Trajan in about AD 112 (about seventeen years after the Apostle John’s death). He sought guidance on how to deal with the sect of Christians. Pliny stated that the Christians assembled together regularly on a certain day “to sing responsively a certain hymn to Christ as if to a god”. (Translation from Bruce M. Metzger, op. cit.) Tacitus Tacitus (c. AD 55-117) was a Roman historian. He wrote his Annals, covering the period AD14-68, in AD 115 (three years after Pliny’s letter, about twenty years after the Apostle John’s death). He stated: Hence to suppress the rumour [that Nero was himself responsible for the fire which caused widespread destruction in Rome in AD 64] he falsely charged with the guilt, and punished with the most exquisite tortures, the persons commonly called Christians, who were hated for their enormities. Christus, the founder of the name, was put to death by Pontius Pilate, Procurator of Judea in the reign of Tiberius; but the pernicious superstition, repressed for a time, broke out again, not only through Judea, where the mischief originated, but through the city of Rome also.5

b. Is Jesus God FINAL.indd 8

Suetonius Suetonius (c. AD 70-130) served as secretary to the Emperor Hadrian, and wrote The Lives of the Twelve Caesars in about AD 120. In the section on Nero, he states that “the Emperor inflicted punishments on the Christians, a sect that professes a new and mischievous superstition”. In the section on Claudius, he refers to the expulsion from Rome of the Jews, “who had been continually stirring up trouble under the influence of Chrestus”.6 Lucian of Samosata Lucian of Samosata (c. AD 125-180) was a Greek satirist. Writing in AD 170, he states: The Christians, you know, worship a man to this day - the distinguished personage who introduced their novel rights, and was crucified on that account…You see, these misguided creatures start with the general conviction that they are immortal for all time, which explains the contempt of death and voluntary selfdevotion which are so common among them; and then it was impressed on them by their original lawgiver that they are all brothers, from the moment they are converted, and deny the gods of Greece, and worship the crucified sage, and live after his laws. All this they take quite on faith, with the result that they despise all worldly goods alike, regarding them merely as common property.7

b. Is Jesus God FINAL.indd 9

Professor F.F. Bruce states: “Some writers may toy with the fancy of a ‘Christ-myth’, but they do not do so on the ground of historical evidence. The historicity of Christ is as axiomatic for an unbiased historian as the historicity of Julius Caesar. It is not historians who propagate the ‘Christ-myth’ theories.”8 Bart D. Ehrman, who writes from a very different perspective - describing himself as “an agnostic with atheistic leanings…” - reaches a comparable conclusion. He examines the evidence in his book, Did Jesus Exist? and states his conclusion pithily: “Jesus did exist, whether we like it or not”.9

B is jesus god sample

B is jesus god sample