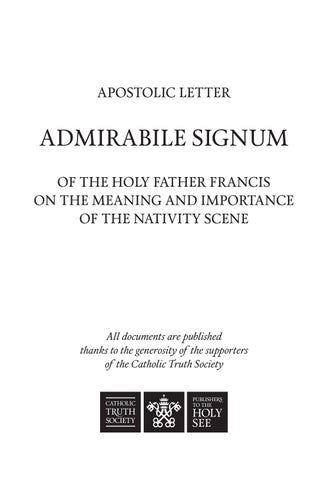 1. The enchanting image of the Christmas crib, so dear to the Christian people, never ceases to arouse amazement and wonder. The depiction of Jesus’s birth is itself a simple and joyful proclamation of the

mystery of the Incarnation of the Son of God. The nativity scene is like a living Gospel rising up from the pages of sacred Scripture. As we contemplate the Christmas story, we are invited to set out on a spiritual journey, drawn by the humility of the God who became man in order to encounter every man and woman. We come to realise that so great is his love for us that he became one of us, so that we in turn might become one with him. With this Letter, I wish to encourage the beautiful family tradition of preparing the nativity scene in the days before Christmas, but also the custom of setting it up in the workplace, in schools, hospitals, prisons and town squares. Great imagination and creativity is always shown in employing the most diverse materials to create small masterpieces of beauty. As children, we learn from our parents and grandparents to carry on this joyful tradition, which encapsulates a wealth of popular piety. It is my hope that this custom will never be lost and that, wherever it has fallen into disuse, it can be rediscovered and revived. 2. The origin of the Christmas crib is found above all in certain details of Jesusâ&amp;#x20AC;&amp;#x2122;s birth in Bethlehem, as related in the Gospels. The evangelist Luke says simply that Mary â&amp;#x20AC;&amp;#x153;gave birth to her firstborn son and

wrapped him in swaddling cloths, and laid him in a manger, because there was no place for them in the inn” (2:7). Because Jesus was laid in a manger, the nativity scene is known in Italian as a presepe, from the Latin word praesepium, meaning “manger”. Coming into this world, the Son of God was laid in the place where animals feed. Hay became the first bed of the One who would reveal himself as “the bread come down from heaven” (Jn 6:41). Saint Augustine, with other Church Fathers, was impressed by this symbolism: “Laid in a manger, he became our food” (Sermon 189, 4). Indeed, the nativity scene evokes a number of the mysteries of Jesus’s life and brings them close to our own daily lives.

But let us go back to the origins of the Christmas crib so familiar to us. We need to imagine ourselves in the little Italian town of Greccio, near Rieti. Saint Francis stopped there, most likely on his way back from Rome where on 29 November 1223 he had received the confirmation of his Rule from Pope Honorius III. Francis had earlier visited the Holy Land, and the caves in Greccio reminded him of the countryside of Bethlehem. It may also be that the “Poor Man of Assisi” had been struck by the mosaics in the Roman Basilica of Saint Mary Major depicting the birth of Jesus, close to the place where, according to an ancient tradition, the wooden panels of the manger are preserved. The Franciscan Sources describe in detail what then took place in Greccio. Fifteen days before Christmas, Francis asked a local man named John to help him realise his desire “to bring to life the memory of that babe born in Bethlehem, to see as much as possible with my own bodily eyes the discomfort of his infant needs, how he lay in a manger, and how, with an ox and an ass standing by, he was laid upon a bed of hay”.1 At this, his faithful friend went immediately to prepare all that the Saint had asked. On 25 December, friars came to Greccio from various parts, together with 1

Nativity Cave in the Hermitage Shrine of Greccio erected by St Francis of Assisi.

people from the farmsteads in the area, who brought flowers and torches to light up that holy night. When Francis arrived, he found a manger full of hay, an ox and a donkey. All those present experienced a new and indescribable joy in the presence of the Christmas scene. The priest then solemnly celebrated the Eucharist over the manger, showing the bond between the Incarnation of the Son of God and the Eucharist. At Greccio there were no statues; the nativity scene was enacted and experienced by all who were present.2 2

This is how our tradition began: with everyone gathered in joy around the cave, with no distance between the original event and those sharing in its mystery. Thomas of Celano, the first biographer of Saint Francis, notes that this simple and moving scene was accompanied by the gift of a marvellous vision: one of those present saw the Baby Jesus himself lying in the manger. From the nativity scene of that Christmas in 1223, “everyone went home with joy”.3 3. With the simplicity of that sign, Saint Francis carried out a great work of evangelization. His teaching touched the hearts of Christians and continues today to offer a simple yet authentic means of portraying the beauty of our faith. Indeed, the place where this first nativity scene was enacted expresses and evokes these sentiments. Greccio has become a refuge for the soul, a mountain fastness wrapped in silence. Why does the Christmas crib arouse such wonder and move us so deeply? First, because it shows God’s tender love: the Creator of the universe lowered himself to take up our littleness. The gift of life, in 3

all its mystery, becomes all the more wondrous as we realise that the Son of Mary is the source and sustenance of all life. In Jesus, the Father has given us a brother who comes to seek us out whenever we are confused or lost, a loyal friend ever at our side. He gave us his Son who forgives us and frees us from our sins. Setting up the Christmas crib in our homes helps us to relive the history of what took place in Bethlehem. Naturally, the Gospels remain our source for understanding and reflecting on that event. At the same time, its portrayal in the crib helps us to imagine the scene. It touches our hearts and makes us enter into salvation history as contemporaries of an event that is living and real in a broad gamut of historical and cultural contexts. In a particular way, from the time of its Franciscan origins, the nativity scene has invited us to “feel” and “touch” the poverty that God’s Son took upon himself in the Incarnation. Implicitly, it summons us to follow him along the path of humility, poverty and self-denial that leads from the manger of Bethlehem to the cross. It asks us to meet him and serve him by showing mercy to those of our brothers and sisters in greatest need (cf. Mt 25:31-46).

4. I would like now to reflect on the various elements of the nativity scene in order to appreciate their deeper meaning. First, there is the background of a starry sky wrapped in the darkness and silence of night. We represent this not only out of fidelity to the Gospel accounts, but also for its symbolic value. We can think of all those times in our lives when we have experienced the darkness of night. Yet even then, God does not abandon us, but is there to answer our crucial questions about the meaning of life. Who am I? Where do I come from? Why was I born at this time in history? Why do I love? Why do I suffer? Why will I die? It was to answer these questions that God became man. His closeness brings light where there is darkness and shows the way to those dwelling in the shadow of suffering (cf. Lk 1:79). The landscapes that are part of the nativity scene also deserve some mention. Frequently they include the ruins of ancient houses or buildings, which in some instances replace the cave of Bethlehem and become a home for the Holy Family. These ruins appear to be inspired by the thirteenth-century Golden Legend of the Dominican Jacobus de Varagine, which relates a pagan belief that the Temple of Peace in Rome would collapse when a Virgin gave birth. More than anything, the ruins are the visible sign of fallen

humanity, of everything that inevitably falls into ruin, decays and disappoints. This scenic setting tells us that Jesus is newness in the midst of an ageing world, that he has come to heal and rebuild, to restore the world and our lives to their original splendour. 5. With what emotion should we arrange the mountains, streams, sheep and shepherds in the nativity scene! As we do so, we are reminded that, as the prophets had foretold, all creation rejoices in the coming of the Messiah. The angels and the guiding star are a sign that we too are called to set out for the cave and to worship the Lord.