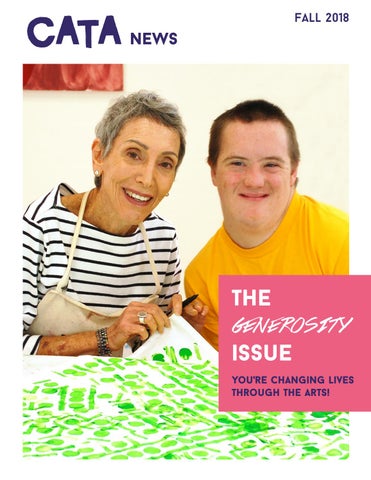 the generosity issue you&#39;re changing lives through the arts!

how you brought artistry to life in 2018

You nurtured Roman’s talents in ukulele and acting. Because of you, more than 700 people with disabilities flourished in 1,300 CATA workshops last year across a host of art forms— painting, drumming, creative writing, dance, and more.

you inspired brittany to follow her passion You brought CATA’s innovative programs to 49 residences, day-habilitation programs, and schools across the Berkshires. That means Brittany from United Cerebral Palsy of Berkshire County was able to develop her artistic skills.

you put dan&#39;s talents on stage You gave Dan and hundreds of CATA artists the chance to shine at performances, art exhibits, and readings at Shakespeare &amp; Company, The Mount, the Clark Art Institute, the Lichtenstein Center for the Arts, Hudson Hall, and beyond.

t Dan Waite shares his ﬂair for acting with a packed audience at Shakespeare &amp; Company.

you connected students with their creative voice

&quot;cata has unleashed my daughter&#39;s talents and her deep desire to make art that expresses her experience as a woman with disabilities.&quot; –mother of a cata artist

You helped triple the number of arts workshops for more than 150 students with disabilities in Berkshire County public schools, so students like Hayden can express themselves through the arts.

“Anytime someone goes to a CATA event, they leave feeling touched and inspired to be fuller in their own heart and mind.”

It only took one visit to a CATA workshop before Maria Sirois was hooked. “It was incredibly powerful—everyone creating together, with this working assumption that we’re all the same. I was just blown away by the generosity of everyone in the room.”

For Maria, this is what makes CATA’s work important, especially now. “There is a dignity that CATA imbues in our community. That in spite of our faults, we can still be generous human beings that bring something to the world that changes how we see each other.”

That sense of connection is what Maria was looking for when she moved to the Berkshires. “Not long after I arrived, I heard about CATA and sent in a donation. Right away I got a call from [CATA founder] Sandy Newman inviting me to a workshop. I was still new to the area and didn’t really know anyone—I thought, ‘This is so wonderful.’ ”

&quot;cata inspires us to show up as our better selves, to greet each other with love and generosity.&quot;

More than two decades later, Maria is a CATA superfan. “CATA inspires us to show up as our better selves, to greet each other with love and generosity. I see it in the CATA artists, the faculty, and everyone that attends a CATA event.”

Knowing this has fueled Maria’s support as a donor. “I wanted to lead a life in which I felt like I was making an impact. So I decided to focus on

local causes that I deeply believed in. I feel proud about that. And what has returned to me from CATA has been a gazillion-fold.” So what does supporting CATA mean for her, personally? “Being connected to CATA helps you love your life a little bit more. It engenders a kind of magnificence in us. We are a better county because of CATA’s work.” Join the CATA movement! Visit CATAarts.org to donate now.

linda &amp; frank want you to include cata in your will! “It’s a simple way to make a BIG diﬀerence. And so easy to do!” “CATA gives us the privilege of bringing joy to people who tend to be marginalized. We would be sad to think that CATA couldn’t continue because we weren’t around to support it. And we want our heirs to know what was meaningful to us.”

By including CATA in your will, trust, or estate plans, you create a lasting legacy that changes lives for CATA artists across our community.

p Your generosity helps CATA artists like Connie Most (BCArc) tap into their vibrant talents.

Legacy gifts help CATA bring creative opportunities to future generations of people with disabilities, regardless of income or financial restrictions. No matter your age or income, a gift in your will is an easy and powerful way to make a difference. 5

loyalty circle Thank YOU loyal supporters!  Acknowledges donors who have given to CATA for 5 or more fiscal years in a row. Fiscal Year = Sept 1 - Aug 31  Deceased

you can help cata raise $10,000! your gift now means more than ever. This year, a group of anonymous donors has pledged to give $10,000 to CATA if 50 people join our Monthly Giving Club. Please be one of our 50 heroes to help unlock this generous gift! Join our Monthly Giving Club with a gift of ANY size and you will help us raise $10,000! To join, simply fill out the enclosed envelope or visit CATAarts.org/donate. 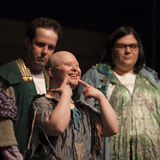