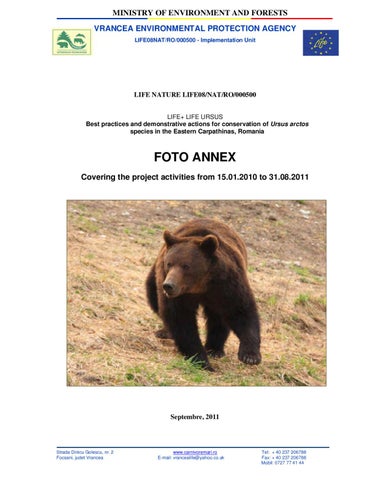 ACTION A.1: Creating the projectâ&amp;#x20AC;&amp;#x2122;s implementing team and the Steering Committee

The second meeting of partners (Baraolt/Cormos)

Types of damages produced by bears analized in the project

Types of damages produced by bears analyzed in the project

ACTION C.1:Demonstrative application of a method set for quantitative and qualitative assessment of the bear population

ACTION C.2: Creation and demonstrative working at the entire projectâ&amp;#x20AC;&amp;#x2122;s area level of an entity which will establish the risks and necessary measures in situations created by problem bears

Damages analyzed by the RAT team in Covasna county

ACTION C.3: Extending of the Animal Rescue Mobile Unit (ARMU)â&amp;#x20AC;&amp;#x2122;s action range at the entire level of the project area and insuring of rapid interventions for capturing, relocating and monitoring of problem bears

Training session for the new members of ARMU team

Transport cage built from lightweight materials, conceived for transport posibility in areas that are inaccesible for autos.

Intervention for the releasing of a poached bear in Ghelinta

Transfer of bear cub from the Centre in Lepsa to Rehabilitation Centre for Orphan Bears in Balan, Harghita

Transfer of bear cub to Rehabilitation Centre from Lepsa

Bear cub taken from Bolotesti on 2011. The bear cub was kept in the plastic barrel from the picture

Transfer of bear cub to Rehabilitation Centre from Lepsa

Releasing the bear captured in Bodoc, Covasna in relocation area placed at considerable distance from human areas, in favourable habitats.

Releasing the bear captured in Malnas, Covasna in relocation area placed at considerable distance from human areas, in favorable habitats.

Female bear captured toghether with her two cubs in Tusnad, Harghita county. The three bears were relocated according to RAT documentation .

Medical evaluation of a deer at the center of Lepsa

In the first part of the rehabilitation , the deer needed hand feeding with milk

In the first part of the rehabilitation , the deers needed hand feeding with milk

ACTION C.4: Reducing of juvenile mortality caused by human disturbance with the protection of hibernation dens in the cub nourishing period

Dens in the trunk of an old tree. Sagau/Vrancea County

Measuring a cavity formed between large blocks of rock.

Monitorizing of a den with video cameras during winter

Mounting of video cameras and thermal senzors in bear dens.

Bear in den in Harghita county

Bear monitorized with a n external camera, mounted near the den

ACTION C5: Lobby for adopting by the Environmental Ministry (MM) and the Ministry of Agriculture, Forestry and Rural Development (MADR) of a methodological guide on the optimal methods of assessing the brown bear population

System for defending corn crops with complex consisting of electric fence and acoustic/visual system, within the locality BĂ˘rseĹ&amp;#x;ti

Installing of an electric fence at a sheep farm in the vecinity of SCI Madaras, Harghita County

Electric fence installed in a sheepfold of the locality Carta, Harghita County

Installing of an electric fence to a culture in Soveja area

Electric fence installed in a sheepfold of the locality Carta, Harghita County

ACTION C.7 Analyze of the degradation and fragmentation level of the brown bear habitats.

Analyze of fragmentation impact of the transport infrastructure. Bear killed by train at Bixad

Bear decapitated by train at Bixad

Bear injured by car in Bodoc

Meeting with students of a school in St. George to promote the project and the need to conserve target species

Smoked curd product with footprint and bear profile marks, produced in the campaign for promoting traditional products of farmers and handcrafters as tool to improve coexistence with brown bears

Dairy products in a sheepfold protected by electric fences