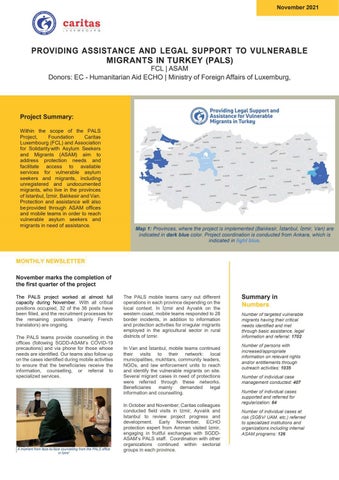 Project Summary: Within the scope of the PALS Project, Foundation Caritas Luxembourg (FCL) and Association for Solidarity with Asylum Seekers and Migrants (ASAM) aim to address protection needs and facilitate access to available services for vulnerable asylum seekers and migrants, including unregistered and undocumented migrants, who live in the provinces of Istanbul, İzmir, Balıkesir and Van. Protection and assistance will also be provided through ASAM offices and mobile teams in order to reach vulnerable asylum seekers and migrants in need of assistance.

Map 1: Provinces, where the project is implemented (Balıkesir, İstanbul, İzmir, Van) are indicated in dark blue color. Project coordination is conducted from Ankara, which is indicated in light blue.

MONTHLY NEWSLETTER November marks the completion of the first quarter of the project The PALS project worked at almost full capacity during November. With all critical positions occupied, 32 of the 36 posts have been filled, and the recruitment processes for the remaining positions (mainly French translators) are ongoing. The PALS teams provide counselling in the offices (following SGDD-ASAM’s COVID-19 precautions) and via phone for those whose needs are identified. Our teams also follow up on the cases identified during mobile activities to ensure that the beneficiaries receive the information, counselling, or referral to specialized services.

The PALS mobile teams carry out different operations in each province depending on the local context. In İzmir and Ayvalık on the western coast, mobile teams responded to 28 border incidents, in addition to information and protection activities for irregular migrants employed in the agricultural sector in rural districts of Izmir. In Van and İstanbul, mobile teams continued their visits to their network: local municipalities, mukhtars, community leaders, NGOs, and law enforcement units to reach and identify the vulnerable migrants on site. Several migrant cases in need of protections were referred through these networks. Beneficiaries mainly demanded legal information and counselling. In October and November; Caritas colleagues conducted field visits in Izmir, Ayvalık and Istanbul to review project progress and development. Early November, ECHO protection expert from Amman visited Izmir, engaging in fruitful exchanges with SGDDASAM’s PALS staff. Coordination with other organizations continued within sectorial groups in each province.

ZOOM IN ZOOM IN section of this month’s newsletter focuses on İzmir office. İzmir is the third most populous province in the country in terms of population. İzmir is located in the Aegean Region on the western coast. Irregular migrants enter Turkey via land routes from the country&#39;s eastern and south-eastern provinces, as well as via air routes through Turkish airports. The majority of them travel to the Aegean and Marmara Regions&#39; border provinces in order to attempt to cross into Greece. Because of its proximity to the Greek Islands of Lesbos and Chios (located less than 15 kms away from the Turkish coast), İzmir is a hotspot for migrants’ attempts to enter the EU. İzmir accommodate many migrants working in the informal sector both in the urban and the rural districts. SGDD-ASAM is present in İzmir with 5 centers, 15 projects, and 175 staff in total. A team of 6 people, consisting of a lawyer, field worker, mobile team protection assistant, Persian translator, Arabic translator, and support personnel, work for the PALS project. The PALS team in İzmir provide support to the beneficiaries under different conditions and locations: the team supports the refugees in urban areas, responds to border incidents, and reaches unregistered refugees in rural areas. 1) Urban Districts: The PALS team conducts case management through the office and provides both face-to-face and phone counselling. The PALS project will also benefit from its outreach capacity in the urban districts (such as Basmane) to identify vulnerable migrants. 2) Border Response: From the beginning of the project, the PALS mobile team has reached 969 people in response to 30 border incidents and identified 92 cases with specific protection needs. The services we provide at the border are: information dissemination, translation, and kit distribution.

The team intervene on authorities’ requests in providing direct assistance on site to individual migrants with thermal blankets and clothes, individual hygiene kits or food according to their needs. During SGDD-ASAM’s interventions, the team performs individual screening and provides basic legal information. The PALS’ mobile team responds to border incidents in coordination with SGDD-ASAM’s Western Border Team. Cases in need of specific protection are identified. SGDD-ASAM’s intervention may last for 4 to 6 hours depending of the size of the group and the time to interview all cases. 3) Rural Districts: The PALS team is targeting settlements living in tents hosting seasonal agricultural workers in rural areas. The teams also contacts local associations, organize legal information sessions and identify protection cases for referral. 287 migrants have been reached so far. Most migrants lack proper ID documents. Key protection issues encountered are child labour and out-of-school children. This is mostly due to the fact that most children are unregistered or living outside their province of registration and could not be enrolled into school. Critical cases are referred to PDMMs and other relevant institutions (Bar Association and Administrative Court) in Turkey, as well as other SGDD-ASAM projects in İzmir based on their legal status. The PALS team intervention in Izmir is challenging as they are confronted with very different contexts, modalities of intervention and individual situations. SGDD-ASAM’s strong local network and good relations with authorities and municipalities are crucial for the success of the project in reaching and addressing migrants needs.

The PALS team in İzmir

STORIES FROM THE FIELD Marieme (22, F) is from Senegal and came to Turkey illegally in August 2021 as she suffered violence and pressure from her family, forcing her to marry an old person instead of a young man of her choice. Not being able to get approval from her family, Marieme ran away with her fiancé and married him. She stated that she decided to try to reach Europe with her husband since their lives would be in danger if she returned to her country. In October; they attempted to cross by boat to Samos Island, but they were pushed back to Turkey by the Greek Coast Guards and their belongings were confiscated. At the time of these events, Marieme was approximately 33 weeks pregnant. Marieme was rescued by the Turkish Coast Guard and sent to a hospital in Balçova where she delivered twins. Hospital contacted SGDD-ASAM for legal assistance and accommodation support. The PALS project team provided temporary accommodation support in a hotel for Marieme and her newborns. Marieme was informed about basic rights and services in Turkey, the registration process, and about the risks and legal consequences that she may encounter due to her irregular presence in Turkey. She was referred to PDMM for registration. After PDMM’s decision, a new case management procedure will be planned accordingly. 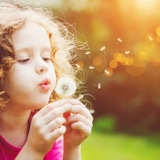