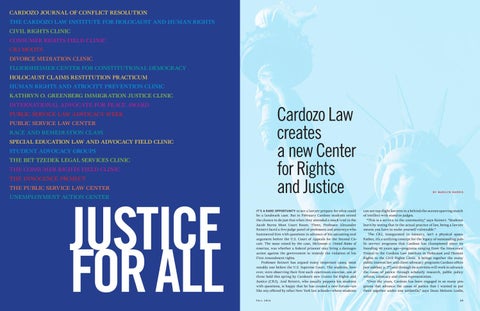 Cardozo Law creates a new Center for Rights and Justice

to see a lawyer prepare for what could be a landmark case. But in February Cardozo students seized the chance to do just that when they attended a mock trial in the Jacob Burns Moot Court Room. There, Professor Alexander Reinert faced a five-judge panel of professors and attorneys who hammered him with questions in advance of his upcoming oral argument before the U.S. Court of Appeals for the Second Circuit. The issue raised by the case, McGowan v. United States of America, was whether a federal prisoner may bring a damages action against the government to remedy the violation of his First Amendment rights. Professor Reinert has argued many important cases, most notably one before the U.S. Supreme Court. The students, however, were observing their first such courtroom exercise, one of three held this spring by Cardozo’s new Center for Rights and Justice (CRJ). And Reinert, who usually peppers his students with questions, is happy that he has created a new forum—unlike any offered by other New York law schools—where students IT’S A RARE OPPORTUNIT Y

can see top-flight lawyers in a behind-the-scenes sparring match of intellect with stand-in judges. “This is a service to the community,” says Reinert. “Students learn by seeing that in the actual practice of law, being a lawyer means you have to make yourself vulnerable.” The CRJ, inaugurated in January, isn’t a physical space. Rather, it’s a unifying concept for the legacy of outstanding public service programs that Cardozo has championed since its founding 40 years ago—programs ranging from the Innocence Project to the Cardozo Law Institute in Holocaust and Human Rights to the Civil Rights Clinic. It brings together the many public interest law and client advocacy programs Cardozo offers [see sidebar, p. 27] and through its activities will work to advance the cause of justice through scholarly research, public policy reform, advocacy and client representation. “Over the years, Cardozo has been engaged in so many programs that advance the cause of justice that I wanted to put them together under one umbrella,” says Dean Melanie Leslie, 25

who proposed the new center. The dean believes that building significantly higher rate of dismissals by lower courts of cases connections between programs, scholarship and clinics not only brought by individuals as opposed to corporations. will highlight Cardozo’s strengths but also will help generate In December 2015, Reinert was co-counsel with the New York ideas for new justice initiatives. Civil Liberties Union on a case that helped clinch a landmark Dean Leslie tapped Reinert last fall to direct the center and to settlement agreement with New York State. The settlement seexpand the initial plans for its programming. Some programs— verely restricts the use of solitary confinement in state prisons. like the moot court panels, which are branded CRJ Moots—are “Working on solitary confinement was very personal to me,” already under way. Longer-term projects, such as a comprehenReinert says, recalling his own experiences in the law school sive, issue-based resource center and a scholar-in-residence clinic. “It’s a serious problem, and I’m grateful to be part of work program, are in development. Reinert hopes to serve Cardozo’s that I’m passionate about.” students while simultaneously bolstering advocacy efforts for Ashcroft v. Iqbal wasn’t Reinert’s first time in the U.S. Suthe public interest legal community at large. preme Court. After he graduated, he clerked for Justice Stephen “In the legal world we tend to cabin things off, and the potenBreyer, noting with irony, “Here I was going to work at an institial connections between scholarship and advocacy aren’t made tution surrounded by protesters, when at another time I could often enough,” says Reinert. “The first article I ever published have been one.” Reinert found it especially challenging “workwas on Eighth Amendment jurisprudence, and the theory it ing for an institution that signed off on death penalties every advanced eventually helped inform one of the arguments made day when, from a personal, moral and policy perspective, I’m by successful proponents of solitary an abolitionist.” confinement reform in New York State The Supreme Court experience Prisons.” This connection between taught Reinert to see that “our judicial scholarship and action is one aspect of system could have someone like me CRJ that excites Reinert. “That’s the kind The Center for Rights and working in it. It’s the one part of our govof connection there should be more of, ernment that has to explain itself and Justice is a unifying where legal scholarship and legal praccan be held accountable. That’s pretty tice intersect and help effect real change. powerful.” concept for the legacy of Those are the kinds of connections I’m Reinert’s goals for CRJ are both lofty hoping CRJ will create.” outstanding public service and practical. “I want to tell a coherent Dean Leslie says Reinert was a natustory about what we already do here at programs that Cardozo ral choice to lead the Center for Rights Cardozo around the issues of justice,” he and Justice. “Alex embodies the spirit of says. “CRJ will also be inward-looking, has championed since its justice at Cardozo. He has argued before meaning we at Cardozo can learn somethe Supreme Court, litigated significant founding 40 years ago. thing about ourselves and how our procivil rights cases for more than a decade grams are interconnected. We will also and has a powerful connection with our be forward-looking, asking, What more students and alumni.” can be done to make the justice system Reinert is a laid-back, approachable fairer and more accessible? At the same professor who parks the bike he rides to work from Brooklyn time, I am very aware that our mission shouldn’t be so broad across from a couch in his office that’s worn from many meetthat it wouldn’t be meaningful.” ings with students. He’s popular enough to have been voted One major project still on the drawing board is a web-based Teacher of the Year. But don’t let his easygoing demeanor fool resource center that would collect in one website all available you; Reinert is a lifelong, tenacious advocate for the information relating to particular social justice issues, such as underrepresented. prisoners’ rights. It’s a project that students can contribute to, As a high school student, Reinert protested apartheid, joined and one that Reinert says “uses our strength to provide a service antiwar rallies and raised his voice for disarmament. He worked to the outside community. Creating one place to see all the conin a civil rights clinic during his final year at NYU Law School, nections between advocacy, scholarship, policy statements and where he focused on prisoners’ rights. “There are lots of things regulations on a particular issue—and not just the litigation that could have spoken to me in terms of helping people who are around it—would be a tremendous resource for students, practiunderrepresented,” he says, “but that’s what hooked me.” tioners and scholars alike.” In a widely publicized case in 2009, Reinert distinguished Reinert is also planning a CRJ speakers’ series as well as a himself by arguing before the U.S. Supreme Court in Ashcroft v. scholar-in-residence program that would draw legal scholars to Iqbal, challenging the U.S. government’s policy of rounding up Cardozo for a term or a year to work on major research and writMuslim Americans in the wake of the September 11 terrorist ing and meet with students. attacks. The complaint alleged that his client, Javaid Iqbal, a For her part, Dean Leslie is excited to see what the CRJ can Pakistani cable installer on Long Island who was swept up on become. “The Center for Rights and Justice as Alex envisions it immigration charges, was treated unfairly while in detention could, in just a few years, demonstrate that scholarship, law and because he was Muslim. The court ruled the complaint was not policy are connected in real, concrete ways. It can contribute to sufficiently fact-filled to be plausible, setting a precedent that, an expansion of justice for all and at the same time embody the Reinert determined in a study published in 2015, has led to a heart and soul of Cardozo.” ? 26

The Center for Rights and Justice (CRJ) is organized around five principles: fairness, equality, accountability, access and transparency. Some examples of how CRJ is working to defend these values are presented here.

Everyone deserves a fair shake.

Clinic at Cardozo, under the

Everyone, not just the educated

or privileged, should be able to

before being deprived of

federal civil lawsuit in the

or her ability to understand the

Southern District of New York on

law or to pay for legal assistance.

have the opportunity to be heard.

behalf of a transgender woman

who was raped after being sent to

decisions are made free of bias or

Immigration Justice Clinic and its

The suit claims she was placed in

by guards who knew she would

represents dozens of elderly and

rights under the Eighth

Supported by the New York City

that they could not get without

Council, the program ensures that

Each year, the school’s Bet

Thanks in part to the work of

no detainee will lack representa-

tion due to a lack of resources.

New York City on behalf of

accountable, regardless of power,

Transparency is central to the

ability must be apportioned fairly,

workings of a justice system that

by the city because they missed

not in a biased or unjust manner.

a renewal deadline. Fairness is

The need for accountability

also central to Vice Dean and

gave rise to the Innocence

Neufeld. Its goals are to

and their impact on consumers

exonerate the innocent through

DNA testing and to reform the

faculty at the clinic have worked

Everyone must be treated the

together to exonerate more than

an ever-growing database of

same way under the law, and

material related to the 1989

call for accountability comes from

murder of six Jesuit priests, their

compromises the legitimacy of

the scholarly work of Assistant

housekeeper and her daughter by

her widely published research on

one of the military officers, who

nondiscrimination: It includes the

national security law and the

had moved to the United States

illegally, to be extradited to

At the Jesuits Massacre

Spain, where he had been

subordinated groups to live as

indicted and would face justice.

true equals in our society.

ALEXANDER A. REINERT Professor of Law Director, Center for Rights and Justice

Some of the Many Faces of Justice at Cardozo Law 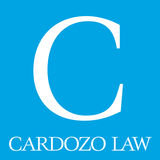 Justice For All: Cardozo Law Creates New Center for Rights and Justice

This article appears in the 2016 edition of Cardozo Life.

Justice For All: Cardozo Law Creates New Center for Rights and Justice

This article appears in the 2016 edition of Cardozo Life.