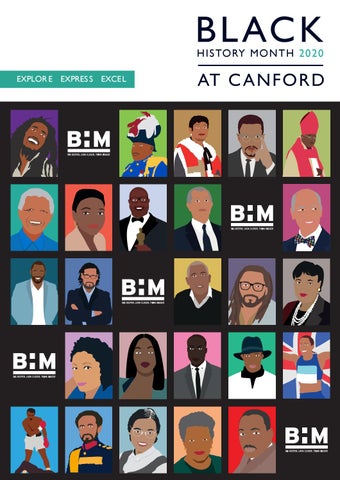 FROM THE HEADMASTER Whilst our broad and varied curriculum has engaged with issues of equality, diversity and inclusion in different ways we recognise that there is much more we need to do in this regard. This yearâ&#x20AC;&#x2122;s focus on Black History Month is part of our ongoing efforts to develop and embed in our school community a deeper awareness and understanding of and engagement with such important issues. In 2020 we have seen issues of race and the problematic legacy of institutional racism come to dominate the headlines. These events have provoked a great deal of frank and honest reflection across society at large and at Canford. As a school community we must always be looking to listen, learn and improve our understanding of the world around us so that we can engage with those issues in an informed and constructive manner, and thus make a positive difference to our world. Following the events of the summer, Pupil Leaders expressed a desire to bring together the educational events of Black History Month into this single, coherent and clear programme, and we plan for this to be a part of our ongoing educational offering in the years to come. I hope that this will not only help to raise awareness of what is going on around school, but encourage Canfordians to draw connections across the many ways in which Black History has permeated and influenced the subjects they study. I hope you will read this programme with interest and embrace this opportunity with curiosity and enthusiasm.

FROM OUR PUPIL LEADERS For the first time ever, we have brought together all the events going on to mark Black History Month into one programme. For those who do not know, BHM is a month to celebrate and highlight the History and achievements of the British black community and their contributions to the UK. As Equality and Diversity pupil leaders, we challenge everybody to go out of their way to learn, immerse themselves into the events on offer and take their experiences with them after this. Thank you to Mr Marriott for helping to put this idea into reality and to everybody running events or helping to organise it. We hope that this event will help to be an important part of Canfordâ&#x20AC;&#x2122;s increasing focus on equality and diversity in the years to come.

TALK TO SIXTH FORM (REMOTE) Wednesday 7th October 2020, 3.20pm-4.30pm David Olusoga is a historian, writer and broadcaster. He is the presenter of A House Through Time and author of Black and British: A Forgotten History. Professor of Public History at the University of Manchester, David looks at what our history reveals about contemporary society and the lasting effects of the British Empire.

Starting out as a researcher for BBC Radio 4, David was soon involved in producing and directing historical documentaries for the station, including Namibia: Genocide and the Second Reich, The Lost Pictures of Eugene Smith, and Abraham Lincoln: Saint or Sinner. From there he became a presenter for the BBC, appearing on documentaries including Civilisations, The World’s War: Forgotten Soldiers of Empire, and the BAFTA-winning Britain’s Forgotten Slave Owners. David’s book Black and British was accompanied by a BBC Two series of the same name which he both wrote and presented. His book looks at the global slavetrading empire of Britain, how the county’s 19th century economic and industrial might was built on American slavery, and how modern society has been shaped as a result. David is also the author of Civilisations: First Contact/The Cult of Progress, The World’s War and The Kaiser’s Holocaust: Germany’s Forgotten Genocide and the Colonial Roots of Nazism. He regularly writes for The Guardian, has hosted the BBC’s The Civilisations Podcast, and is a regular contirbutor and commentator across broadcast media.

JOHN OF GAUNT’S DEBATE THIS HOUSE BELIEVES MODERN BRITAIN IS RACIST Friday 9th October 2020 - 5.00pm-6.00pm, Layard Theatre The JoG debate will now take place in the Layard Live. Please email Mr Redwood for a place in the audience. Spaces are limited due to social distancing and must be prebooked.

BLACK HISTORY OF DORSET WORKSHOP Tuesday 13th October 2020 - 4.00pm-6.00pm, Ellsberg Miss Lines invites Lower Sixth to come to a workshop to learn more about the history of black people in our local county: Dorset. Thomas Lewis Johnson, a missionary, writer and former slave from Virginia who settled in Bournemouth

JAZZ BAND PERFORMING “SING SING SING” BY BENNY GOODMAN Remote performance with link emailed to staff and pupils. Benny Goodman, May 30, 1909 – June 13, 1986 Goodman is also responsible for a significant step in racial integration in America. In the early 1930s, black and white jazz musicians could not play together in most clubs or concerts. In the Southern states, racial segregation was enforced by the Jim Crow laws. Benny Goodman broke with tradition by hiring Teddy Wilson to play with him and drummer Gene Krupa in the Benny Goodman Trio.

Remote performance with link emailed to staff and pupils. Walter Theodore “Sonny” Rollins is an American jazz tenor saxophonist who is widely recognized as one of the most important and influential jazz musicians. In a seven-decade career, he has recorded over sixty albums as a leader.

SCREENING OF NATIONAL THEATRE’S “SMALL ISLAND” Wednesday 7th October 2020 - 7.00-9.30pm in the Layard This epic and much-loved stage production of Andrea Levy’s Orange Prize-winning book, was filmed live on stage during its sold-out run in 2019. Small Island embarks on a journey from Jamaica to Britain, through the Second World War to 1948 – the year the HMT Empire Windrush docked at Tilbury. The play follows three intricately connected stories: Hortense yearns for a new life away from rural Jamaica, Gilbert dreams of becoming a lawyer, and Queenie longs to escape her Lincolnshire roots. Hope and humanity meet stubborn reality as the play traces the tangled history between Jamaica and the UK.

SCREENING OF FILM “YULI” Monday 12th October – Venue and audience to be confirmed To mark Hispanity day the Spanish department will be screening Yuli. Yuli is the nickname of Carlos Acosta. His father Pedro calls him that because he considers him the son of Ogún , an African god, a fighter. However, since childhood, Yuli has always fled from any kind of discipline and education. The streets of an impoverished and abandoned Havana are his private classroom. His father, on the other hand, does not think the same, he knows that his son has a natural talent for dance and that is why he forces him to attend the National School of Art in Cuba. Despite his repeated escapades and his initial indiscipline, Yuli ends up being captivated by the world of dance, and thus, from an early age, he began to forge his legend, becoming the first black dancer to perform some of the most famous roles in ballet, originally written for whites, in companies like the Houston Ballet or Royal Ballet of London.

“THE GOLDEN ERA OF WEST INDIES CRICKET” A TALK WITH MR WILSON Wednesday 14th October - 5.30pm-6.30pm, Egdon “I’ve been a citizen of Trinidad and Tobago since birth and my family personally knew people associated with West Indies cricket, such as Richard ‘Prof ’ Edwards, Gus Logie and Tony Cozier. I’ve been to the Queen’s Park Oval in Port of Spain and the Kensington Oval in Bridgetown. The West Indies team has had many, many great players, not least the incomparable Garry Sobers and the great Frank Worrell (attached), the first black captain of the West Indies in 1960, but it is the West Indies team from 1976 to 1995 which ranks as the most successful and one of the greatest sporting teams of all time, in spite of the many obstacles in their path.” – Mr Wilson

EPISODE OF BLACK AND BRITISH SHELL PSME (TBC) Shells will watch an episode of Black and British in their PSME session on Friday. Black and British on the BBC: bold, vibrant, provocative stories exploring what it means to be black in Britain today. Further episodes can be found on Canford Media.

TUTOR TIME DISCUSSION FOR LOWER SCHOOL Lower School pupils will spend some of their Monday tutor time discussing questions of race and discrimination in modern Britain.

IN LESSONS ... FRENCH pupils will spend time exploring IN LESSONS

the Francophone world, discovering the Ville Esclavagiste, the story of the diverse ‘98 French World Cup Team. Shells studying MUSIC will spend time learning about African drumming whilst other year groups will focus on listening exercises composed by Black musicians. The “Elsewhere in Black History” programme will provide bitesize reflections on what was going on in black history at particular points in the HISTORY syllabus areas across all year groups. All Fourth Form ENGLISH pupils will be taking part in a talk by noted black poet and author Dean Atta on October 1st 2020 and also studying a complementary enrichment course entitled “Where in the world” which will look at a series of books that champion diversity before presenting to each other on October 14th. In GEOGRAPHY , Shells will be exploring the underground rail road, Sixth Form will study the use of open spaces for BAME communities, Fifth Form will investigate urban ghettoization, and the Fourth Form will investigate key Black Geographers

ART will be showing each year group a

series of films on the work of Black artists. In CLASSICS , Shells will examine the concept of Roman citizenship and Black identity, GCSE pupils will look at the links between ancient and modern slavery, and Sixth Form will be exploring the Head of Augustus and the Kush Empire.

PES pupils will receive a series of one off

lessons on inspirational key figures in black history and culture such as Martin Luther King and William Wilberforce.

In the SPANISH the Upper Sixth will have the opportunity to explore the influence of the transatlantic slave trade on Hispanic nations and culture.

The racial issues surrounding “Hitler’s Olympics” and the triumph of Jessye Owens in Berlin in 1936 will be studied in PE lessons over the course of the month.

Lower School Pupils will receive an introduction to Henrietta Lacks and John Edmonstone in BIOLOGY. Sixth Form will spend some time exploring the, sometimes questionable and controversial, science around race.

DISPLAYS TO LOOK OUT FOR: Library display and reading lists Haitian Art display in MFL Black Scientist of the Day across Sciences SFL Display on neurodiversity History Display on diversity in History 9

• Black and British: A forgotten History by David Olusoga – can be found on Canford Media https://media.canford.com/View.aspx?id=73791~5o~hsexrfzfK2 • Noughts and Crosses on BBC iplayer https://www.bbc.co.uk/iplayer/episodes/p082w992/noughts-crosses • The Living History of Slavery and Imperialism: Healing and Empowerment in the time of Covid https://www.blackhistorymonth.org.uk/article/section/latest-events/the-living-history-of-slavery-and- imperialism-healing-and-empowerment-in-the-time-of-covid-19-23-august-2020-6pm/

• Alison Hammond: Back to School – available on Canford Media

WORTH READING: UK AUTHORS BLACK HISTORY (NON-FICTION) • What is Race? by Claire Heuchan and Nikesh Shukla (2018) • Black and British: A Forgotten History by David Olusoga (2016) • Black History Matters: The Story of Black History, from African Kingdoms to Black Lives Matter by Robin Walker (2019). It has been shortlisted in the 13 to 16 age category for the School Library Association Information Book Award 2020. • The Life and Rhymes of Benjamin Zephaniah: The Autobiography (2019) • Natives by Akala (2018) • Black, Listed by Jeffery Boakye (2019) • I Will Not Be Erased by gal-dem (2019) • Why I’m No Longer Talking to White People about Race by Reni Eddo-Lodge (2017) BLACK VOICES (FICTION) • A Change Is Gonna Come by various authors (2017) • Bloodshot Monochrome by Patience Agbabi (2008) (Poetry) (Sixth Form) • The Black Flamingo by Dean Atta (2019) 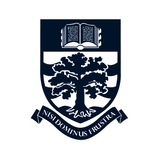 For the first time ever, we have brought together all the events happening at Canford to mark Black History Month into one programme. For th...

For the first time ever, we have brought together all the events happening at Canford to mark Black History Month into one programme. For th...