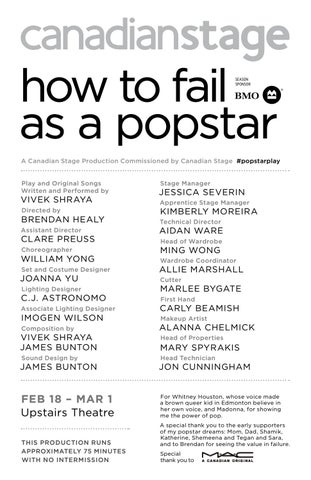 how to fail as a popstar Season Sponsor

For Whitney Houston, whose voice made a brown queer kid in Edmonton believe in her own voice, and Madonna, for showing me the power of pop.

This production runs approximately 75 minutes with no intermission

Vivek Shraya is an artist whose body of work crosses the boundaries of music, literature, visual art, theatre, and film. Her bestselling book I’m Afraid of Men was heralded by Vanity Fair as “cultural rocket fuel,” and her album with Queer Songbook Orchestra, Part-Time Woman, was nominated for the Polaris Music Prize. She is one half of the music duo Too Attached and the founder of the publishing imprint VS. Books. A fivetime Lambda Literary Award finalist, Vivek was a Pride Toronto Grand Marshal, featured on The Globe and Mail’s Best Dressed list, and received honours from The Writers’ Trust of Canada and The Publishing Triangle. She is a director on the board of the Tegan and Sara Foundation and an Assistant Professor of Creative Writing at the University of Calgary. How To Fail As A Popstar is Vivek’s debut play. vivekshraya.com @VivekShraya

Brendan is the Artistic Director at Canadian Stage. As a director, his work has been presented across the country. His productions have garnered multiple Dora Mavor Moore Awards and he is a recipient of the Ken McDougall and the Pauline McGibbon awards for directing. Notable productions include Sarah Kane’s Blasted, Martin Crimp’s Fewer Emergencies, Jean Genet’s The Maids, and Daniel MacIvor’s Arigato,Tokyo. Brendan is a graduate of the National Theatre School of Canada, where he is a regular instructor, and holds a Masters in International Arts Management. Prior to coming to Canadian Stage, Brendan was the Artistic Director of Buddies in Bad Times Theatre.

Clare Preuss has collaborated with companies across Canada and in Germany, Lebanon, Switzerland and Uganda including: Alameda, Artistic Fraud of Newfoundland, BeMe, Blyth Festival, Buddies in Bad Times, Cahoots, Carlos Bulosan, Driftwood, Dynamo, Factory, fu-GEN, FRICTION, The Guild, Gwaandak, High Performance Rodeo, Native Earth Performing Arts, New Harlem Productions, Theatre Monnot, National Arts Centre, Nightwood, Paprika, Ramshackle, Stratford Festival, Sundown, Theatre Direct, Theatre Passe Muraille, Volcano, Why Not Theatre and Young People’s Theatre among others. Clare has been nominated for numerous awards and has received one so far. She is a certified yoga instructor, sessional instructor at the University of Calgary and the Artistic Director of Downstage. Clare is happy for this chance to work with Canadian Stage and to be a part of such a great team!

C.J. Astronomo (she/her) has worked as a freelance lighting designer, production manager, and technician in a variety of live performing arts throughout Canada, the U.S., Australia, and New Zealand. Select lighting design credits include: Acha Bacha (Theatre Passe Muraille); The Crucible (Hart House); the marquise of O (the red light district); The Rocky Horror Show (Sudbury Theatre Centre); Post Eden (Suburban Beast); Oh, the Humanity… (Outside the March); Serious Money (Nightwood Theatre). C.J. also assisted at the Stratford Festival for seven seasons on shows including Coriolanus; The Rocky Horror Show; Alice Through the Looking-Glass. She will be designing Wolf Hall at the Stratford Festival in their 2020 season. Many thanks to Imogen Wilson for being a popstar on this production!

James Bunton James Bunton is a Toronto-based independent composer and a multiple Dora Award-winning sound designer. His sound design and compositions include works for: Quote Unquote

Jessica Severin Jessica Severin is a Toronto-based Stage Manager and a graduate of the Faculty of Music, University of Toronto. Over the past 15 years, she has worked across the country and internationally for companies such as Mirvish Productions, Vancouver Opera, the Canadian Opera Company, Opera Atelier, Glimmerglass, the Royal Opera Versailles, Luminato, Musical Stage Company, Soulpepper, Obsidian, Nightwood, Tarragon, Ross Petty Productions, the Thousand Islands Playhouse, Drayton Entertainment, Harold Green Jewish Theatre and others. Her most recent productions include: Rusalka, La bohéme (Canadian Opera Company); Anne of Green Gables (Thousand Islands Playhouse). This is her Canadian Stage debut.

Kimberly Moreira Kim Moreira is from Milton, Ontario. A graduate of the Sheridan College Technical Production program, she is so honored to be working on this show. She hopes to have a career in theatre and performance that includes much more original and important Canadian work in the future. Kim thanks her teachers and mentors for helping her get to this point. Shout-outs to my eversupportive family and friends, especially MYTP and all my theatre pals.

William Yong William Yong has created more than eighty dance and theatre works which has been presented worldwide. He was trained and received his masters degree with distinction at the London Contemporary Dance School in U.K. Past companies he worked for include: Wayne McGregor’s Random Dance and Matthew Bourne’s AMP in the U.K.; Canadian Stage, Against The Grain, Theatre Rusticle, Red Snow Collective, lemonTree creations, Toronto Dance Theatre, CORPUS, Peggy Baker, Fila 13 in Canada and many others. William and his works have received seven Dora Mavor Moore Award nominations. He was also nominated for MyTheatre Awards’ ‘Outstanding Direction’ for Comfort. William was also the recipient of the 2013 “I love dance/ J’aime la danse” Award for Innovation. William and the ensemble of Against The Grain Theatre’s opera production Kopernikus were awarded the Dora Mavor Moore Award 2019 for ‘Outstanding Performance of an Ensemble’ in Opera Division. www.zataomm.org

Something So Right Written by Paul Simon

C ANAD IAN S TAGE S U P P O RTERS AN N UAL F U N D Canadian Stage would like to thank the following individuals whose contributions to our annual fund help to sustain our ability to collaborate, innovate and create with cutting-edge artists from Canada and around the world.

These listings are current as of Feb 3, 2020 and we have made every effort to ensure appropriate recognition. If, however, your name has been accidentally omitted, listed incorrectly or misspelled, we apologize in advance for the error. Please notify us at donate@canadianstage.com with any corrections..

I N M E M O RIAM We would like to thank the following people who have made gifts in memory of loved ones. In memory of Ruth Salzman Rebecca Dennis Terry Eng Toby Greenbaum

always still the dawn WRITTEN BY 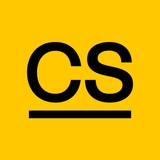 How to Fail as a Popstar - Program

How to Fail as a Popstar - Program