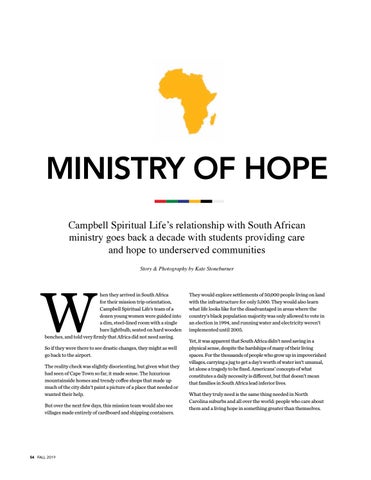 hen they arrived in South Africa for their mission trip orientation, Campbell Spiritual Life’s team of a dozen young women were guided into a dim, steel-lined room with a single bare lightbulb, seated on hard wooden benches, and told very firmly that Africa did not need saving. So if they were there to see drastic changes, they might as well go back to the airport. The reality check was slightly disorienting, but given what they had seen of Cape Town so far, it made sense. The luxurious mountainside homes and trendy coffee shops that made up much of the city didn’t paint a picture of a place that needed or wanted their help. But over the next few days, this mission team would also see villages made entirely of cardboard and shipping containers.

They would explore settlements of 50,000 people living on land with the infrastructure for only 5,000. They would also learn what life looks like for the disadvantaged in areas where the country&#39;s black population majority was only allowed to vote in an election in 1994, and running water and electricity weren’t implemented until 2005. Yet, it was apparent that South Africa didn’t need saving in a physical sense, despite the hardships of many of their living spaces. For the thousands of people who grow up in impoverished villages, carrying a jug to get a day’s worth of water isn’t unusual, let alone a tragedy to be fixed. Americans’ concepts of what constitutes a daily necessity is different, but that doesn’t mean that families in South Africa lead inferior lives. What they truly need is the same thing needed in North Carolina suburbs and all over the world: people who care about them and a living hope in something greater than themselves. 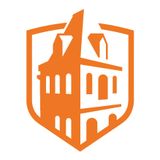