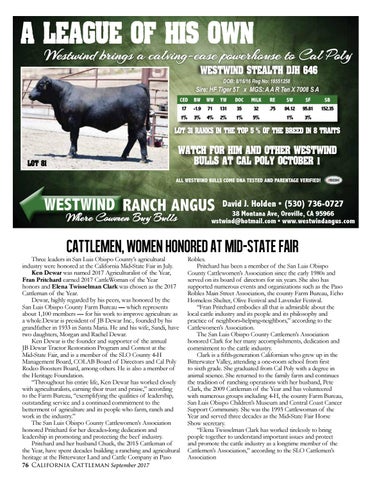 A LEAGUE OF HIS OWN

CATTLEMEN, WOMEN HONORED AT MID-STATE FAIR Three leaders in San Luis Obispo County’s agricultural industry were honored at the California Mid-State Fair in July. Ken Dewar was named 2017 Agriculturalist of the Year, Fran Pritchard earned 2017 CattleWoman of the Year honors and Elena Twisselman Clark was chosen as the 2017 Cattleman of the Year. Dewar, highly regarded by his peers, was honored by the San Luis Obispo County Farm Bureau — which represents about 1,100 members — for his work to improve agriculture as a whole.Dewar is president of JB Dewar Inc., founded by his grandfather in 1933 in Santa Maria. He and his wife, Sandi, have two daughters, Morgan and Rachel Dewar. Ken Dewar is the founder and supporter of the annual JB Dewar Tractor Restoration Program and Contest at the Mid-State Fair, and is a member of the SLO County 4-H Management Board, COLAB Board of Directors and Cal Poly Rodeo Boosters Board, among others. He is also a member of the Heritage Foundation. “Throughout his entire life, Ken Dewar has worked closely with agriculturalists, earning their trust and praise,” according to the Farm Bureau, “exemplifying the qualities of leadership, outstanding service and a continued commitment to the betterment of agriculture and its people who farm, ranch and work in the industry.” The San Luis Obispo County Cattlewomen’s Association honored Pritchard for her decades-long dedication and leadership in promoting and protecting the beef industry. Pritchard and her husband Chuck, the 2015 Cattleman of the Year, have spent decades building a ranching and agricultural heritage at the Bitterwater Land and Cattle Company in Paso 76 California Cattleman September 2017

Robles. Pritchard has been a member of the San Luis Obispo County Cattlewomen’s Association since the early 1980s and served on its board of directors for six years. She also has supported numerous events and organizations such as the Paso Robles Main Street Association, the county Farm Bureau, Echo Homeless Shelter, Olive Festival and Lavender Festival. “Fran Pritchard embodies all that is admirable about the local cattle industry and its people and its philosophy and practice of neighbors-helping-neighbors,” according to the Cattlewomen’s Association. The San Luis Obispo County Cattlemen’s Association honored Clark for her many accomplishments, dedication and commitment to the cattle industry. Clark is a fifth-generation Californian who grew up in the Bitterwater Valley, attending a one-room school from first to sixth grade. She graduated from Cal Poly with a degree in animal science. She returned to the family farm and continues the tradition of ranching operations with her husband, Pete Clark, the 2009 Cattleman of the Year and has volunteered with numerous groups including 4-H, the county Farm Bureau, San Luis Obispo Children’s Museum and Central Coast Cancer Support Community. She was the 1993 Cattlewoman of the Year and served three decades as the Mid-State Fair Horse Show secretary. “Elena Twisselman Clark has worked tirelessly to bring people together to understand important issues and protect and promote the cattle industry as a longtime member of the Cattlemen’s Association,” according to the SLO Cattlemen’s Association