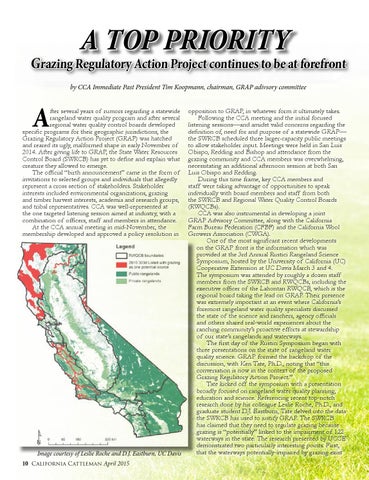 fter several years of rumors regarding a statewide rangeland water quality program and after several regional water quality control boards developed specific programs for their geographic jurisdictions, the Grazing Regulatory Action Project (GRAP) was hatched and reared its ugly, malformed shape in early November of 2014. After giving life to GRAP, the State Water Resources Control Board (SWRCB) has yet to define and explain what creature they allowed to emerge. The official “birth announcement” came in the form of invitations to selected groups and individuals that allegedly represent a cross section of stakeholders. Stakeholder interests included environmental organizations, grazing and timber harvest interests, academia and research groups, and tribal representatives. CCA was well-represented at the one targeted listening session aimed at industry, with a combination of officers, staff and members in attendance. At the CCA annual meeting in mid-November, the membership developed and approved a policy resolution in

opposition to GRAP, in whatever form it ultimately takes. Following the CCA meeting and the initial focused listening sessions—and amidst valid concerns regarding the definition of, need for and purpose of a statewide GRAP— the SWRCB scheduled three larger-capacity public meetings to allow stakeholder input. Meetings were held in San Luis Obispo, Redding and Bishop and attendance from the grazing community and CCA members was overwhelming, necessitating an additional afternoon session at both San Luis Obispo and Redding. During this time frame, key CCA members and staff were taking advantage of opportunities to speak individually with board members and staff from both the SWRCB and Regional Water Quality Control Boards (RWQCBs). CCA was also instrumental in developing a joint GRAP Advisory Committee, along with the California Farm Bureau Federation (CFBF) and the California Wool Growers Association (CWGA). One of the most significant recent developments on the GRAP front is the information which was provided at the 3rd Annual Rustici Rangeland Science Symposium, hosted by the University of California (UC) Cooperative Extension at UC Davis March 3 and 4. The symposium was attended by roughly a dozen staff members from the SWRCB and RWQCBs, including the executive officer of the Lahontan RWQCB, which is the regional board taking the lead on GRAP. Their presence was extremely important at an event where California’s foremost rangeland water quality specialists discussed the state of the science and ranchers, agency officials and others shared real-world experiences about the ranching community’s proactive efforts at stewardship of our state’s rangelands and waterways. The first day of the Rustici Symposium began with three presentations on the state of rangeland water quality science. GRAP formed the backdrop of the discussion, with Ken Tate, Ph.D., noting that “this conversation is now in the context of the proposed Grazing Regulatory Action Project.” Tate kicked off the symposium with a presentation broadly focused on rangeland water quality planning, education and science. Referencing recent top-notch research done by his colleague Leslie Roche, Ph.D., and graduate student D.J. Eastburn, Tate delved into the data the SWRCB has used to justify GRAP. The SWRCB has claimed that they need to regulate grazing because grazing is “potentially” linked to the impairment of 122 waterways in the state. The research presented by UCCE demonstrated two particularly interesting points. First, that the waterways potentially-impaired by grazing exist Image courtesy of Leslie Roche and D.J. Eastburn, UC Davis