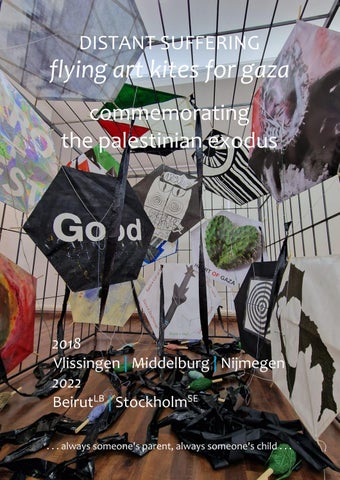 Photo front: Beirut, gallery of the Institite for Palestine Studies, Palestine Hall | Salute to the Prisoners of Freedom exhibition Photo by courtesy of ©Ingrid Rollema 2022

Content Context of the kite project Making the kites

Invitation letter to the participating artists

Context The first European image of a diamond-shaped kite, we find in the book Kites by David Pelham1. The illustration provides - as we would now interpret it - an anthropological overview of all children&#39;s games and their paraphernalia from that time. The kite appears in de left upper corner. Coincidentally, the image shows the Abdijplein in Middelburg, in 1618, my home town . . .

Kite flying is a fairly old Dutch tradition. The standard work published in 2021 on the phenomenon - &#39;De Vliegerende Hollander&#39; / ‘The Kite Flying Dutchman’ cultural history of the Dutch kite imagination from 16002 - devotes a chapter Vlissingen and Gaza to this project. In the 70th year of the state of Israel, Overvliet asked twenty artists from home and abroad to create a work of art on a hexagonal sheet of Japanese paper that could be converted into a kite. The resulting kites were launched on October 20, 2018 on the Vlissingen beach. The artist wanted to recall the fact that in 2011 the Guinness record for the largest number of simultaneously launched kites was set by children from the Gaza Strip: 12.35 kites remained in the air for the required 30 seconds at a time. A nice action, but Overvliet also pointed to a less pleasant side of kite flying in Gaza: 4

pleasant side of kite flying in Gaza: &#96;&#96;On the other hand, kites are used to fly flammable materials and small explosives to Israeli territory and cause damage there.&#39;&#39; The intention was that the kite artworks would contribute to constructive thinking about such ambivalences. That did not work very well. Almost a hundred years after the kite competition of Jacob Israël de Haan, the Vlissingen kite project made it painfully clear that peace in the Middle East was still a long way off. It also raised a question that had often been asked in the confrontation between the Western and the Eastern world: is the kite an innocent piece of children&#39;s toy, a symbol of innocence and hope, or is it a means of fighting? In 2021 the European Legal Support Centre took the project as a case-study about the Denial of use of public space for a kite festival in Vlissingen in the publication The Attempt to Chill Palestinian Rights Advocacy in the Netherlands (see page 43 of this catalogue). One of their findings: The political parties represented in the Vlissingen Council, foremost the SGP (Reformed Political Party) and the ( right wing liberal party HO ) VVD, as well as the local Perspectief op Vlissingen (POV), called for the prohibittion of the festival on Vlissingen’s public beach, referring to a provision of the General Local Regulations based on which events may be prohibited, if their content and appearance do not fit with the policy or damage the interests of the Municipality. Some kites flew again in November 2018, at Vasim in Nijmegen. Due to the same Israel-agitprop a lot of people did not dare to attend the event. The then city poet of Nijmegen, the Palestinian poet Amal Karam, read some poetry in Arabic. The young Palestinians present at the venue posted some pictures; Twitter Gaza exploded . . . And now, in 2022, the kites are on their last two journeys: first to Sweden, to the Slipvillan Summer Festival in Stockholm and then to Lebanon, to the I.P.S.-gallery in Beirut. Where they will be displayed in the proper context, despite all thinkable ambiguity . . .

The kites on the beach of Vlissingen

In 2010, thousands of children in Gaza improved the Guinness Record Kite (kite flying record) that they themselves had established in 2009. 7,202 Children and as many pilots &amp; kites participated in this event, organized by UNRWA, the Palestinian refugee organization of the United Nations. In 2018, people in Gaza use kite flying as a cheerful political statement of protest, occasionally alternated with an attempt of actual resistance to underscore the 70years remembering of the Nakba - the Disaster. The term Al-Nakba refers to the 1948 war with Israel. A war with the current disastrous consequences for the Palestinians in Gaza and the West Bank. With their protests, the Palestinians support their demand for returning to their villages and cities. A requirement, inci-dentally, that is recognized by numerous internationally recognized organizations, including the U.N. As said: sometimes kites are used as a weapon of resistance. This is regarded by one of the best armed countries in the world - including possessing the nuclear weapon - as an existential danger: kite terrorism. A concept that is lustfully propagated by the corporate media all over the world. Israeli drones apparently cannot control the pilots &amp; these kites, so the Israeli parliament called on the army in order, by sharpshooters, to shoot children who are playing with kites . As you may know, since December 2012 I have been working on a work in progress DISTANT SUFFERING. In this context, combined with the new direction of the art space ruimte(space)CAESUUR, I propose a collaborative project with a number of artists. I want to create an exhibition consisting of kites, made by some 20 colleague artists who have ex-pressed a critical attitude towards social developments in the past and / or identified themselves with my work. The exhibition has two moments: the kites are air born on Saturday, October 20 at 4 o&#39;clock in Vlissingen during a heavenly vernissage, whether by the artists themselves or our friends, and subsequently shown in ruimteCAESUUR. Afterwards, the exhibition might find accommodation elsewhere with the help of the invited artists. Hereby I ask you if you want to participate in my project. When I get a positive answer from you, I will send you a sheet of paper with the outline of a kite. In this case the model concerns a symmetrical improvisation on the Japanese Rokkaku, the so-called libanese model. The paper is artisan (Washi), made in Japan: Inshu Kozo, 56 grams, color white. The gross size of the sent sheet is 98 by 98 cm. My question is to work your art on that sheet in your own way. In my studio I assemble your work into a final kite. Last but not least. As a homo technologus, I try to act as the perfect organizer of this project. However, since the wind plays a decisive role, some uncertainty remains. So also the (slight) chance that one of the pilots crashes on its first flight or that there is so little wind that the kites do not want to fly. As a homo ludens you should take that risk for granted.

I am very curious about your answer, with warm regards Hans Overvliet

Case Study #4: Denial of use of public space for a kite festival in Vlissingen In The Attempt to Chill Palestinian Rights Advocacy in the Netherlands By The European Legal Support Centre When City Councillor Rens Reijnierse (50Plus) stood on the Vlissingen beach, visiting an art project in solidarity with Palestinians in the Israeli-occupied and besieged Gaza Strip, he could not foresee that his joyful tweet about the event would unleash an international smear campaign, leading to the cancellation of the event.[45] In October 2018, the platform of local artists ruimteCAESUUR had organised a kite festival and invited 20 international artists to design kites as a means of awareness-raising and solidarity with the Palestinian children of Gaza. CIDI was the first to respond to the City Councillor’s tweet, slamming the event for its use of kites, which CIDI called “weapons of Gazan terror”, and publishing a picture of a kite adorned with a swastika, although this kite was not related to the festival by any means. The swastika-kite CIDI depicted in its tweet had first been published by The Times of Israel in April 2018. The NIW and Jonet followed suit with similar stories about an “action against the Jewish State displaying Nazisymbolism”. Editor Cnaan Liphshiz then disseminated via the New York-based Jewish Telegraphic Agency the story of the “kite featuring a swastika in green, the official colour of Hamas”, [46] which was replicated, among others, by Haaretz and even The Times of Israel itself. The political parties represented in the Vlissingen Council, foremost the SGP (Reformed Political Party) and the VVD, as well as the local Perspectief op Vlissingen (POV), denounced the festival as an “antisemitic project” that causes damage to the image and interests of the Vlissingen Municipality. They also called for the prohibition of the festival on Vlissingen’s public beach, referring to a provision of the General Local Regulations based on which events may be prohibited, if their content and appearance do not fit with the policy or damage the interests of the Municipality.[47] Consequently, Councillor Reijnierse apologised and cancelled his supportive tweet. Faced with this backlash, as well as threats, Hans Overvliet, initiator of the festival, cancelled a second event that had been planned, explaining: It does not make much sense for me to explain on the boulevard what the kites stand for, if the only people who come to watch it are those who think we should be shot in our legs, as I read on social media.

As a reporter, Overvliet was an eyewitness to the events in the Middle East during the 1980s. Of course these experiences resonate in DISTANT SUFFERING. With the production of the art-series distant suffering, Hans Overvliet questions the role of the media consumer, yet equally his own role as an artist. By constructing these works of existing media images, Overvliet allows us to view these images through an entirely different lens. Most often, the artist’s intended themes include the multiplicity of visual culture and its mindless consumption. Overvliet’s works ask from the spectator to gaze intently at them, in order to instigate in the viewer a new awareness about the images around them. 1 The transition into art is inspired by the Dutch Artist Arman-do2: It is the beauty of evil, ‘die Schönheit des Bösen’, located in the belly of the evil, looking for a place in the wake of evil in order to show to show himself to me, although it doesn’t amuse me at all. This beauty calls me to transfer the ‘evil’ into the innocent, because of the amoral domain of art. The action driven perspective that is included in the approach of Hannah Arendt’s non-paternalistic empathy is the performative part of the series distant suffering. Elements of distant suffering were exhibited in the Netherlands, Belgium, Pakistan, Italy, the Czech Republic, Denmark, Sweden and England. Hans Overvliet lives and works in the province of Zeeland in the South-West of the Netherlands. Next to his art-work he is, together with his wife Willy van Houtum, the founder and every day guardian of the 27-year old space for contemporary art in Middelburg: ruimteCAESUUr.

Since 2013, by means of the ongoing art-series distant suffering, the Dutch artist Hans Overvliet ( Leiden, 1952 ) investigates the role of the media in their representtation of (military) violence. This, in the context of themes as perception, memory and identity formation. Overvliet uses a various range of media, symbols and codes, bringing together seemingly dichotomies like beauty and violence, refinement and brutality, the sublime and the vulgar. Aspects of power, politics, exclusion, censorship and the connection between artist, artwork and viewer seemingly effortlessly infiltrate his multifaceted concepttual oeuvre. The language-image relationship and references to (art) history are always present. 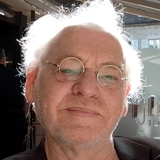 Context of the kite project

Flying the kites on Sunday, November 20 in Nijmegen | De Vasim

Invitation letter to the participating artists