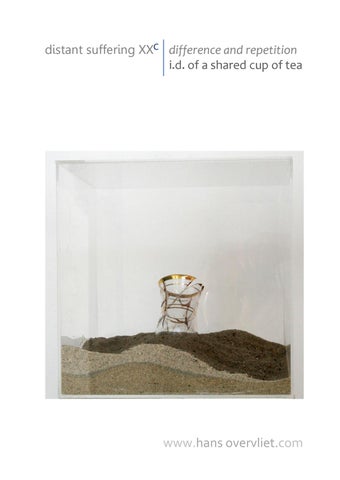 distant suffering XXC difference and repetition i.d. of a shared cup of tea

Populist politicians and critics often dismissively refer to the left's preference for 'drinking tea with terrorists' in their calls for the use of military violence against perceived threats to the ‘Western way of life.’ This discourse to promote resolute, violent action against supposed terrorists plays an important role in the current conflict in Yemen, where weapons manufactured and supplied by the West are used in a crude war effort. This war has taken the lives of thousands of civilian victims, almost all of whom remain anonymous in media and official reports. i.d. of a shared cup of tea is a small monument for 14-year-old Raja Hamid Yahya al-Oud from Sa’na, Yemen. Raja was killed on 23 March 2018 by a CB 52 B/B cluster bomb manufactured in Jackson, Tennessee, at the Milan Army Ammunition Plant.

Finding who exactly are the victims of the war in Yemen is a hell of a journey. Most often you will find groups: unnamed "families", "wed-ding guests" and / or "funeral attendants", "(young) children", "bus passengers", "half the village", etc., etc. I have literally read hundreds of UN documents. I found no names there. These reports also provide a picture of a huge, well-oiled, bureaucratic organization that is involved in registering war crimes. Without any consequence. The first name I came across was in a newspaper - the Guardian1: 14-year-old Raja Hamid Yahya al-Oud from Sa'na. She died by a fragmentation bomb dropped by an American-backed Saudi Arabian drone. The devastating effects that dud bomblets from cluster munitions have inflicted on civilians is well documented. They have killed or injured an estimated 56,000 to 86,000 civilians since World War II. The United States alone has spent more than $ 3.4 billion on demining operations since 1993, including in countries where it released hundreds of millions of bomblets in past wars that continue to kill and maim civilians.2

The war in Yemen has become a museum piece, as can be found in the Leiden Museum of Antiquities where I wandered as a child in the late 1950s. The brass plates spelled strange, often ineffable engraved places and names. Names . . .

From the Black Sea, the Mediterranean, the Caspian Sea to the Gulf of Aden, all cultures there have a few things in common. One of these is the mandatory drinking a glass of tea on every occasion as a sign of contact. Similarly in Yemen. I was allowed to sit down at any opportunity to drink tea. A ritual that is always taunted by the far-right when people try to do something about intercultural communication: drinking tea is sugar coating Islam terrorism. I took my memories on those many cups of tea that I was invited to drink in Yemen as the starting point to set up a small monument for 14-year-old Raja Hamid Yahya al-Oud from Sa'na. 1.

In the corporate media the war in Yemen is completely absent. And as such interred as an artifact in history - an epitaph waiting for the last breath. The war in Yemen has become a

Hans Overvliet, since 2013 has been investigating the role of the mass media with regard to reporting on (military) violence and the fading memories of violence by means of an ongoing art-series: distant suffering. As a reporter, Overvliet was an eyewitness to the events in the Middle East during the 1980s. These experiences resonate in the oeuvre of distant suffering. The titel of the project is taken from Luc Boltanski’s book Distant Suffering, Morality, Media and Politics. Overvliet employs an apparently controversial strategy: that of poetic images, inspired by the words of Percy Bysshe Shelley (1792 – 1822): Poets are the unacknowledged legislators of the world. The themes have a strong connection to visual culture in general, particularly the information overload and its thoughtless consumption. With the production of the art-series distant suffering, Hans Overvliet questions the role of the media consumer, yet equally his own role as an artist. By constructing these works of existing media images, Overvliet allows us to view these images through an entirely different lens. Most often, the artist’s intended themes include the multiplicity of visual culture and its mindless consumption. Overvliet’s works ask from the spectator to gaze intently at them, in order to instigate in the viewer a new awareness about the images around them. (Julia Mulié , Assistant Curator Vleeshal, Middelburg, 28/11/2016)

distant suffering XXC difference and repetition i.d. of a shared cup of tea

Innocence. Isn’t that a much more interesting idea than beauty and comfort? John Maxwell Coutzee