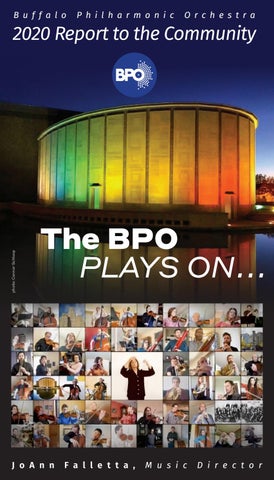 Dear Friends of the BPO,

In spite of the fact that the world changed so dramatically in March that we could not even finish our 2019-20 season, we want to take a moment to reflect herein on some of the great moments before the pandemic hit, as well as our artistic response to it. As you know from previous reports, we have three goals we strive to meet each and every year:

Diverse repertoire and collaborations fueled interest and led to a new alltime record for subscription sales; our entry into the presentation of movies with live orchestra opened new doors for younger audiences; our education program continued to flourish.

T he budget will once again be balanced for the 11th consecutive year; the board established a Cash Reserve Fund to augment further an improving balance sheet; the endowment managed to hold its own through turbulent markets at the $45 million level. After the season was canceled due to the pandemic, the BPO did not slow down: O  ur musicians and education department produced more than 50 instructional instrument demonstrations for schools to use to recruit new music students! W  e partnered with others to showcase BPO musicians in unique cultural settings such as Graycliff and more recently, the Darwin Martin House. O  ur musicians created their own digital performances; and collaborated on the creation of The Firebird video, which continues to inspire with its message of hope and rebirth. W  e created a digital concert hall at Kleinhans and have now launched BPOnDemand, our virtual concert season! This has been an extraordinary year with extraordinary circumstances, yet we have managed to pursue our mission against all odds. We are thankful for your support and we look forward to seeing you at Kleinhans Music Hall when that time comes! In the meantime, please review our 2020 Report to the Community and visit us on-line at www.bpo.org. Warm regards, John Yurtchuk 19-20 Chair

The legacy of the orchestra was forever altered when JoAnn Falletta was appointed Music Director in 1999. There is no doubt she has led the orchestra to a new level of prominence at home and abroad. Her 20th Anniversary was marked with a sparkling black-tie affair at the Hotel Henry. CoChaired by Michal and Jim Wadsworth and Carolyn and John Yurtchuk, the gala netted a record $275,000 for the Annual Fund.

The dynamic and diminutive Sandy Cameron electrified the Kleinhans stage in a performance of iconic film composer Danny Elfman’s Concerto for Violin and Orchestra: Eleven Eleven. Elfman’s cachet opened the doors for new audiences to experience the BPO’s ever-expanding repertoire.

We stepped up efforts to continue to entertain and engage the community through several new initiatives during the shutdown. In collaboration with Buffalo-Toronto Public Media, we implemented a weekly radio broadcast of archived recordings, and created a limited-run Musician Portraits television program featuring our talented artists. We also increased content on our YouTube channel, and filmed socially-distanced, small-ensemble performances in several unique WNY locations for future digital release.

MENTORING THE NEXT GENERATION

Our musicians created meaningful connections with students through our Teaching Artists program. Classroom visits provided the opportunity for one-on-one interaction with budding performers to ask questions, view presentations, practice technique, and be inspired by the enthusiasm and encouragement of our talented musicians.

In its ongoing efforts toward inclusion, equity, and diversity, members of the BPO performed at both the Gowanda and Erie County Correctional Facilities for over 100 prison inmates, and provided musical solace through performances at the Buffalo Niagara Convention Centerâ&#x20AC;&#x2122;s Project Homeless Connect resource fair, connecting disenfranchised individuals with free services available throughout Western New York.

The BPOâ&#x20AC;&#x2122;s education programs continue to nurture the next generation of musicians and audience members. Weekday orchestra performances at Kleinhans Music Hall, led by Assistant Conductor Jaman E. Dunn, are designed specifically for schoolaged children. These performances served over 53,000 Western New York students this past season.

Over 50 years ago, the BPO and Kleinhans ushered in collaborations with legendary rock musicians and orchestral tributes to their iconic anthems. The season carried on the tradition of providing new experiences for fans of Queen, the Eagles, and the Grateful Dead, while the April performance of the original Jefferson Starship had to be postponed.

From the aerial flyers of Cirque Fiesta to the 50th anniversary celebration of The Beatlesâ&#x20AC;&#x2122; Abbey Road and Yellow Submarine albums, Principal Pops Conductor John Morris Russell set the tone for fun, frivolity, and fabulous programs. A pre-concert party highlighted Pops Goes to the Movies, and an outstanding cast of vocalists played to a full house in honoring the one-and-only Queen of Soul at Respect: A Tribute to Aretha Franklin.

The new film series kicked off with a performance of John Williamsâ&#x20AC;&#x2122; score to the madcap, family-friendly 90s hit, Home Alone, while the movie was projected on screen above the orchestra. The inaugural enterprise attracted new audiences young and old, and was to be followed up with Back to the Future in Concert, which had to be rescheduled to next season.

The operating budget was balanced but declined 10% from last year to $11 million. While the shutdown of concerts caused the loss of $1.6 million in ticket sales and contract fees, receipt of Federal CARES ACT funding for payroll protection, combined with expense savings offset the losses, allowing musicians and staff to be paid throughout the season. Before the pandemic, subscription ticket sales reached a new all-time high of $1.9 million. The revenue pie-chart reflects the dramatic decrease of earned revenue as a percentage of budget and the one-time increase in Government Support.

Mission Statement The Buffalo Philharmonic Orchestra Society, Inc. provides a resident professional, major symphony orchestra of artistic excellence and integrity to enrich the quality of life in Western New York through the presentation of live symphonic music and other musical events which educate and entertain the broadest possible audiences within and beyond the Western New York region.

MUSIC ON THE GO One of JoAnn Falletta’s most enduring achievements will be that of recording and broadcasting. We have 51 recordings, complete or in progress, spreading the BPO brand across the world through Naxos and our own Beau Fleuve label, and frequently featured on Performance Today radio broadcasts. Two additions were made to our CD library this season; The Passion of Yeshua, and Forgotten Treasures, a 20th anniversary gift to JoAnn from the orchestra featuring five of her favorite ‘hidden gems’ from Schmidt, Weiner, Martucci, Pizzetti, and Tcherepnin.

we know the way 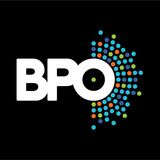 BPO 2020 Report to the Community

BPO 2020 Report to the Community