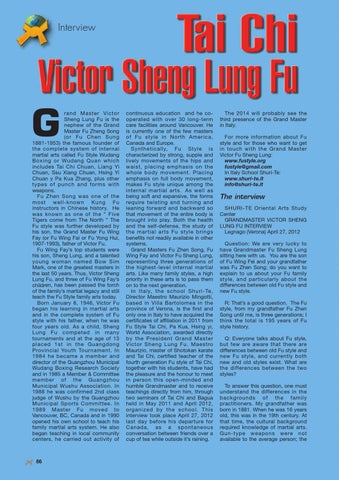 rand Master Victor Sheng Lung Fu is the nephew of the Grand Master Fu Zheng Song (or Fu Chen Sung 1881-1953) the famous founder of the complete system of internal martial arts called Fu Style Wudang Boxing or Wudang Quan which includes Tai Chi Chuan, Liang Yi Chuan, Ssu Xiang Chuan, Hsing Yi Chuan y Pa Kua Zhang, plus other types of punch and forms with weapons. Fu Zhen Song was one of the most well-known Kung Fu instructors in Chinese history. He was known as one of the “ Five Tigers come from The North “ The Fu style was further developed by his son, the Grand Master Fu Wing Fay (or Fu Wing Fai or Fu Yong Hui, 1907-1993), father of Victor Fu. Fu Wing Fay’s top students were his son, Sheng Lung, and a talented young woman named Bow Sim Mark, one of the greatest masters in the last 50 years. Thus, Victor Sheng Lung Fu, and three of Fu Wing Fay’s children, has been passed the torch of the family’s martial legacy and still teach the Fu Style family arts today. Born January 8, 1946, Victor Fu began his learning in martial arts and in the complete system of Fu style with his father, when he was four years old. As a child, Sheng Lung Fu competed in many tournaments and at the age of 13 placed 1st in the Guangdong Provincial Youth Tournament. In 1984 he became a member and director of the Guangzhou Municipal Wudang Boxing Research Society and in 1985 a Member &amp; Committee member of the Guangzhou Municipal Wushu Association. In 1988 he was confirmed 2nd class judge of Wushu by the Guangzhou Municipal Sports Committee. In 1989 Master Fu moved to Vancouver, BC, Canada and in 1990 opened his own school to teach his family martial arts system. He also began teaching in local community centers, he carried out activity of

continuous education and he cooperated with over 30 long-term care facilities around Vancouver. He is currently one of the few masters of Fu style in North America, Canada and Europe. Synthetically, Fu Style is characterized by strong, supple and lively movements of the hips and waist, placing emphasis on the whole body movement. Placing emphasis on full body movement, makes Fu style unique among the internal martial arts. As well as being soft and expansive, the forms require twisting and turning and leaning forward and backward so that movement of the entire body is brought into play. Both the health and the self-defense, the study of the martial arts Fu style brings benefits not readily available in other systems. Grand Masters Fu Zhen Song, Fu Wing Fay and Victor Fu Sheng Lung, representing three generations of the highest-level internal martial arts. Like many family styles, a high priority in these arts is to pass them on to the next generation. In Italy, the school Shuri-Te, Director Maestro Maurizio Mingotti, based in Villa Bartolomea in the province of Verona, is the first and only one in Italy to have acquired the certificates of affiliation in 2011 from Fu Style Tai Chi, Pa Kua, Hsing yi, World Association, awarded directly by the President Grand Master Victor Sheng Lung Fu. Maestro Maurizio, master of Shotokan karate and Tai Chi, certified teacher of the fourth generation Fu style of Tai Chi, together with his students, have had the pleasure and the honour to meet in person this open-minded and humble Grandmaster and to receive teachings directly from him, through two seminars of Tai Chi and Bagua held in May 2011 and April 2012, organized by the school. This interview took place April 27, 2012 last day before his departure for Canada, as a spontaneous conversation between friends over a cup of tea while outside it’s raining.

The 2014 will probably see the third presence of the Grand Master in Italy. For more information about Fu style and for those who want to get in touch with the Grand Master Victor Fu Sheng Lung: www.fustyle.org fustyle@gmail.com In Italy School Shuri-Te: www.shuri-te.it info@shuri-te.it

The interview SHURI-TE Oriental Arts Study Center GRANDMASTER VICTOR SHENG LUNG FU INTERVIEW Legnago (Verona) April 27, 2012 Question: We are very lucky to have Grandmaster Fu Sheng Lung sitting here with us. You are the son of Fu Wing Fei and your grandfather was Fu Zhen Song; do you want to explain to us about your Fu family style, and particularly about the differences between old Fu style and new Fu style. R: That’s a good question. The Fu style, from my grandfather Fu Zhen Song until me, is three generations; I think the total is 195 years of Fu style history. Q: Everyone talks about Fu style, but few are aware that there are differences between old Fu style and new Fu style, and currently both new and old styles exist. What are the differences between the two styles? To answer this question, one must understand the differences in the backgrounds of the family practitioners. My grandfather was born in 1881. When he was 16 years old, this was in the 19th century. At that time, the cultural background required knowledge of martial arts. Gun-type weapons were not available to the average person; the 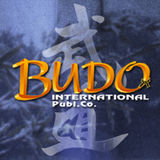