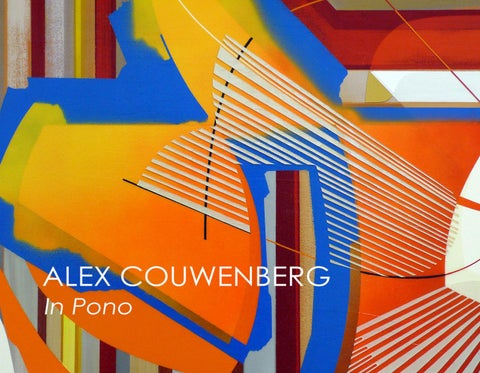 IN THE NEXT DIMENSION BY SHANA NYS DAMBROT AFTERWORD BY BRUNO L. DAVID CHECKLIST AND IMAGES OF THE EXHIBITION BIOGRAPHY

IN THE NEXT DIMENSION By Shana Nys Dambrot 2

Unless your work gives you trouble, it is no good. – Pablo Picasso Alex Couwenberg is an imperfectionist in the house of precision, a humanist in the realm of instruments. His handmade hard-edge abstraction privileges the physicality of the artistic process and the scars left by the creativist gesture, within an aesthetic tradition that eschews both. This upsets some people. He’s okay with that. His radial, vectorized color blocking and interpretive mathematics are tethered to Southern California art history in certain salient and well-analyzed ways. But in speaking to the contemporary zeitgeist, Couwenberg expresses himself by combining several kinds of styles and techniques in singular compositions that transcend those Mid-Century foundations to create edifices of today’s visual plurality. Confronting his works, one takes an automatic optical inventory of their variegated, topographical textures; you can feel yourself seeing, noticing that the act of sight is physical not just informational. This is intellectually rigorous work speaking a language of intuition – or perhaps it’s the other way around. Couwenberg’s sunny, tertiary, largely earthbound palette also disengages from the Pop and Op Art traditions at the edges of his personal style. As his line work evokes painting studios rather than sites of commercial or industrial design, so too do his nuanced, ombred color profiles operate with an emotional eccentricity and expressively individual declaration – rich yolk, penumbrous blue, slate grey, freckle-free eggshell, salty olive, oxblood, ice, tangerine dream, crude-oil black, bandage-colored flesh, royal teal, copper, violet, sherbet, moss and mica. 3

This already compelling range of chromatic and linear tonalities, laid down in translucent layers like tissue-paper stained-glass in patchworks of recombinant color, simultaneously delineates shapes in organized compositions with the centers of gravity of still-lifes or classical tableaux. This has been true throughout his practice and especially between 2007-2015. But Couwenberg in the early months of 2016 has already made a marked breakthrough, offering a new dimension of engagement with the perspectival sight-lines of pictorial space, a methodology of architectural origami and machine-aged naturalism now happening across the planes of the painted multiverse. Itâ&#x20AC;&#x2122;s as different as a map from a globe, as typography from Braille. If dimensional space and modeled rendering help differentiate between a medieval vision and the Renaissance naturalisms, then perspective and momentum make the difference between retro and futuristic modernisms in the same way. Taking the core dynamic of the image from schematic to atmospheric, disrupting the instinct for reading right to left with refractive vector-based optical depth. Thereâ&#x20AC;&#x2122;s no single vanishing point to get sucked into but rather a plane to linger over with different perspectives and focal points. One thinks about string theory and the invisible pockets of nested universes. One thinks about broken kaleidoscopes and the disorientation of an aerial landscape. One imagines drawing a street view, lining up the partly-lit windows in upper stories, vaguely aware of the existences of some occupants. One feels the air inside spaces that not only the eye but the body of the viewer might now occupy.

Disrupting the flatness of the pattern, hinting at digital imaging technology or the analog pixelation of lens flare, works like Maybe Tomorrow evoke Bernard Tschumi’s plan for Parc La Villette; Space Oddity looks like the aspirational, heroic exterior of Star Fleet Academy; Thruxton is every inch a city block at night, or the old Whitney Museum; Looking for a Kiss looks like the new Whitney; Provocateur has a pulse, it breathes with a perceptible rhythm; Stylus is geological and ancient, mythological and possibly a mirage. Couwenberg’s sensibility is radial, botanical, musical, percussive, and syncopated, with a patois of satellite imaging, pressurized marquetry, and the romantic labor of grave-rubbing . It’s a fractal kind of naturalism, emotional rather than ideological, yet formalist rather than spiritual. With the asymmetrical balance of Ikebana, the organic world is run through the filter of the intellect. Couwenberg’s work certainly gives him trouble, but perfection is not the goal. It’s something better than perfection, because it has a story.

Shana Nys Dambrot is a Los Angeles-based writer, art critic, curator, and artist. She is the Los Angeles Editor for Whitehot Magazine, Contributing Editor to Art Ltd., and a contributor to KCET’s Artbound, Flaunt, Huffington Post, The Creators Project, Fabrik, VS. Magazine, Palm Springs Life, and Porter & Sail. She studied Art History at Vassar College, writes short fiction, and speaks in public at galleries, schools, and cultural institutions nationally. This text is one in a series of the gallery’s exhibitions written by fellow gallery artists and friends.

I am pleased to present an exhibition of paintings and prints titled “In Pono” by Los Angeles-based artist Alex Couwenberg at the Bruno David Gallery. This is the artist’s fourth solo exhibition with the gallery. In his fourth solo show with the gallery, painter Alex Couwenberg creates images that are inspired by the elements from his surroundings. In Pono, is a Hawaiian term suggesting a state of harmony and balance. Not only does this reference the two different bodies of work in the exhibition (paintings and prints) and how they relate to one another, but also his outlook on life, family and studio practice. Couwenberg spends part of the year working and teaching on the Big Island of Hawaii and the rest of the year in Los Angeles. “It’s all about the pursuit of balance,” he says, keeping yourself healthy both physically and mentally and constantly moving forward in your vision. The core of Couwenberg’s work and process references his Los Angeles roots. It suggests an aesthetic associated with custom cars, music, surf culture, and modernist design, all aesthetically indicative of the region. Historically, his work pays a visual homage to the art-making styles connected with Los Angeles and Southern California dating back to the 1950’s. His work nods towards the Hard Edge and Geometric Abstractionists, the Finish Fetish, and the Light and Space artists. All of whom have contributed over the years to the visual landscape of LA’s art making community. Through a series of additive and reductive moves and passes, Couwenberg creates multilayered and multidimensional works that chase the ideas of harmony and balance, In Pono.

A graduate of the Art Center College of Design in Pasadena and The Claremont Graduate School, Alex Couwenberg has shown in several solo and group exhibitions throughout the United States, Canada, Europe, and Asia. His work can be found in numerous public, private, corporate, and museum collections around the world. Recent museum acquisitions include the Lancaster Museum of Art and History, Laguna Art Museum, Crocker Museum of Art, Long Beach Museum of Art, and the Daum Museum in Missouri. In 2007, Couwenberg was awarded the Joan Mitchell Foundation Award for his achievements in painting, and was recently featured as the subject of Los Angeles based filmmaker Eric Minh Swenson’s documentary, “Mana”, which focuses on the artist’s life and studio practices. Couwenberg recently exhibited a body of paintings in a two-person show along with his mentor Karl Benjamin in Los Angeles. The show was part of the Getty Museum’s ongoing “Pacific Standard Time” project highlighting Southern California artists and their contributions towards art making. He is currently working on a monograph of his work in collaboration with Griffith Moon Publishing and lives and works in both Los Angeles, and the Big Island of Hawaii. Support for the creation of significant new works of art has been the core to the mission and program of the Bruno David Gallery since its founding in 2005. I would like to express my sincere thanks to Shana Nys Dambrot for her thoughtful essay. I am deeply grateful to Christina Lu and Thomas J. Fruhauf, who gave much time, talent, and expertise to the production of this catalogue. Invaluable gallery staff support for the exhibition was provided by Cleo Azariadis, Christina Lu, Thomas J. Fruhauf, Haleigh Givens, Peter Finley, and Viola Bordon.

CHECKLIST & IMAGES OF THE EXHIBITION 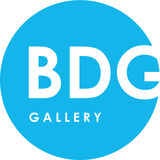 Published by the gallery for the exhibition “Alex Couwenberg: In Pono” at Bruno David Gallery. This exhibition catalog includes text by Shan...

Published by the gallery for the exhibition “Alex Couwenberg: In Pono” at Bruno David Gallery. This exhibition catalog includes text by Shan...