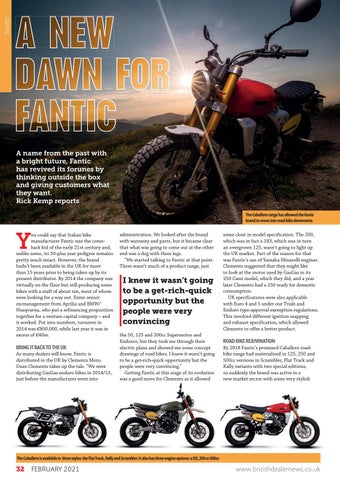 A NEW DAWN FOR FANTIC A name from the past with a bright future, Fantic has revived its forunes by thinking outside the box and giving customers what they want. Rick Kemp reports The Caballero range has allowed the Fantic brand to move into road-bike showrooms

ou could say that Italian bike manufacturer Fantic was the comeback kid of the early 21st century and, unlike some, its 50-plus year pedigree remains pretty much intact. However, the brand hadn’t been available in the UK for more than 15 years prior to being taken up by its present distributor. By 2014 the company was virtually on the floor but still producing some bikes with a staff of about ten, most of whom were looking for a way out. Enter senior ex-management from Aprilia and BMW/ Husqvarna, who put a refinancing proposition together for a venture capital company – and it worked. Put into numbers, turnover in 2014 was €800,000, while last year it was in excess of €40m.

BRING IT BACK TO THE UK As many dealers will know, Fantic is distributed in the UK by Clements Moto. Dean Clements takes up the tale. “We were distributing GasGas enduro bikes in 2014/15, just before the manufacturer went into

administration. We looked after the brand with warranty and parts, but it became clear that what was going to come out at the other end was a dog with three legs. “We started talking to Fantic at that point. There wasn’t much of a product range, just

some clout in model specification. The 200, which was in fact a 183, which was in turn an overgrown 125, wasn’t going to light up the UK market. Part of the reason for that was Fantic’s use of Yamaha Minarelli engines. Clements suggested that they might like to look at the motor used by GasGas in its 250 Cami model, which they did, and a year later Clements had a 250 ready for domestic consumption. UK specifications were also applicable with Euro 4 and 5 under our Trials and Enduro type-approval exemption regulations. This involved different ignition mapping and exhaust specification, which allowed Clements to offer a better product.

ROAD BIKE REJUVINATION By 2018 Fantic’s promised Caballero roadbike range had materialised in 125, 250 and 500cc versions in Scrambler, Flat Track and Rally variants with two special editions, so suddenly the brand was active in a new market sector with some very stylish

The Caballero is available in three styles: the Flat Track, Rally and Scrambler. It also has three engine options: a 125, 250 or 500cc