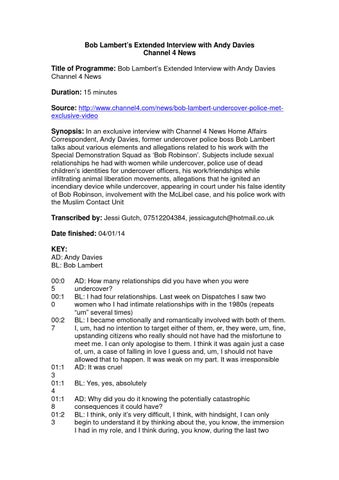 AD: How many relationships did you have when you were undercover? BL: I had four relationships. Last week on Dispatches I saw two women who I had intimate relationships with in the 1980s (repeats “um” several times) BL: I became emotionally and romantically involved with both of them. I, um, had no intention to target either of them, er, they were, um, fine, upstanding citizens who really should not have had the misfortune to meet me. I can only apologise to them. I think it was again just a case of, um, a case of falling in love I guess and, um, I should not have allowed that to happen. It was weak on my part. It was irresponsible AD: It was cruel BL: Yes, yes, absolutely AD: Why did you do it knowing the potentially catastrophic consequences it could have? BL: I think, only it’s very difficult, I think, with hindsight, I can only begin to understand it by thinking about the, you know, the immersion I had in my role, and I think during, you know, during the last two

years, I think probably I became too immersed in my alter ego Bob Robinson. I think I probably lost contact with who I really was AD: Did your wife and children know about these relationships you were having at this time? BL: No, no AD: How did you reconcile that? BL: Um with great, great difficulty and, um, only by something in the business of, you know, well that’s it, that’s what Bob Robinson does AD: Was it accepted practice in your unit; sleeping with some of the targets? BL: I mean there is definitely knowledge within the unit of, er, issues, relationships, um, but I am going to address that first with the, er, investigation before I say any more AD: Some of these women are deeply traumatised by these experiences. Do you not think they have the right to hear exactly what was going on within the unit in terms of what the procedures were about having sexual relationships while undercover? BL: I think they do and, er, I think they need to hear it. They need to hear a full explanation. I will contribute to that and I hope that they get it as quickly as possible. I’ve been, I am, I continue to be available to contribute to that at-at a moment’s notice AD: I think it’s Jackie who said, who you’ve been involved in a relationship with, has used the phrase “It’s like being raped by the state” BL: Yes I mean I have read that and, you know, I can understand why it must-why it must feel like that AD: I mean this is - is it not - a gross invasion of someone’s privacy? BL: No I accept that AD: One senior officer has recently described this as abhorrent BL: With hindsight I can only say that I, er, genuinely, er, regret my actions. I apologise to the, er, women affected, in my case particularly, um, to Belinda Harvey and Jackie who appeared on the Dispatches programme AD: Will you accept that what you did is morally reprehensible? BL: Yes. Yes I would. I’d always been a faithful husband, er, I only ever became an unfaithful husband when I became an undercover police officer AD: How many children did you have while you were undercover? BL: One AD: Did your bosses know that you’d fathered a child while undercover? BL: Well that is a question, Andy, that I won’t answer now. I shall be,

you know, willing to discuss that with the investigation team AD: Why can’t you answer that now? It’s a fairly simple question BL: I just choose not to AD: Did your bosses know that you were involved in sexual relationships with a number of women while you were undercover? BL: There was knowledge but beyond that I shall give my, you know, full account to the investigation AD: Why can’t you discuss that now? BL: Well I think it’s, um AD: Because there’s arguably a public interest in these matters. Here you were, undercover, having relationships, fathering children. It is an important issue for people to understand: whether you were informing your bosses, whether this was sanctioned at a senior level, and, if so, how was it sanctioned BL: I can assure you that I will answer your question but I would prefer very much to respond first to the investigation AD: Who was the real Bob Robinson? BL: Um, well the birth certificate, you know, clearly related to, um, er, a child, er, who had died, um, in my case, um, the death was, you know, as a child, possibly a young, not an infant, but a child AD: This is shameful isn’t it? The harvesting of dead children’s identities BL: Well I’m not sure, um, if it’s put to-if it’s put to, er, good use AD: Without the knowledge of the families of those involved to have the identities of their children exploited in this way, without their consent BL: I must say in 1984 when I adopted that identity, er, I didn’t really give pause for thought on the, you know, the ethical considerations. It was what was, that’s what was done. I mean let’s be under no illusions about the extent to which that was an accepted practice. That was well known at the highest levels of the Home Office AD: The Home Office knew about the harvesting of dead children’s identities? BL: Well of course, um, if you want to use that phrase - the harvesting – but, however you want to put, but the basic fact of using those birth certificates, of course AD: So the Head of Special Branch would have authorised it, condoned it, the Head of the Metropolitan Police at the time, the Home Secretary, all of these people would have been aware BL: Well, you know, certainly a senior civil servant in the Home Office for sure BL: There was great anguish involved, um, in the sense of friendships, you know, one my best friends in the movement, um, Bob Robinson’s best friend in that the animal liberation movement, um, he ended up in

prison, um, largely but not exclusively as a result of my intelligence. I certainly contributed intelligence which led to him being in prison and then AD: And that was a genuine friendship - is that what you’re saying? BL: Well I would say, I have to say it was, I mean in Bob Robinson’s world, but in my heart, there’s only one heart here, and in my heart he was AD: The enemy? BL: No. No, in my heart he was a friend first and foremost and much of our friendship was genuine, and to many other-many other friends I made in the animal rights movement, I would say to them that, er, I had a genuine respect for their cause and I still do AD: They’ll look at this and, frankly, find that insulting you saying that you’ve got respect for their cause. I mean you went in there, you infiltrated them, and in some cases, in one case specifically, got them jailed BL: And I think Andy, I mean, I don’t think there is a big contradiction because my rational justification for that is the cause is good but the means are not AD: It’s been claimed in Parliament that you ignited an incendiary device at a branch of Debenhams whilst undercover in 1987 BL: Yes AD: Did you? BL: No AD: You weren’t involved at all in that in the planting or the ignition of that incendiary device? BL: No, no it’s a false allegation AD: Did you ever give evidence in court using a false identity? BL: Yes I was, um, on occasions I was arrested as Bob Robinson and, er, you know, to maintain cover I went through the, um, process of arrest, er, detention, um, and, um, on, you know, on occasions, er, appearing in court AD: You had authority to use your alter ego in court did you? BL: Um, well, again I think, I think this is something that the investigation has to look at first AD: How many other officers gave evidence in court using false credentials? BL: No I can’t, I genuinely cant say how many AD: You were committing perjury, weren’t you, by going into court using a false name under oath? BL: No I think the position was that I was maintaining cover as Bob

Robinson AD: So the court was possibly made aware or the judge was made aware of your role? BL: Well that’s what needs to be established and that may well be a case-by-case judgement AD: Did you co-author the so-called McLibel leaflet? BL: Yes I was certainly a contributing author to the McLibel, well, I think the one that I remember making a contribution to was ‘What’s Wrong With McDonalds’ AD: Did McDonalds ever find out that one of the authors of this leaflet that cost them so much money was actually working for special branch? BL: Um I don’t-I don’t really know AD: Let me ask you this - was it ever disclosed during the civil proceedings that one of the authors of this leaflet, at the heart of it, was actually a Special Branch officer? BL: I don’t know the answer to that question AD: Whatever is said, er, my reputation is never gonna be, um, sort of, redeemed for many people and I don’t think it should be. I think I made serious mistakes that I should regret and I always will do BL: Then, the only, I think the only real comfort I can take from my police career is the fact that the Muslim Contact Unit was about learning from mistakes. The Muslim Contact Unit, which I set up with a long term friend and colleague in Special Branch, that unit was an attempt, a genuine attempt to work in partnership with Muslim community, Muslim individuals in London, to tackle the Al-Qaeda or the Al-Qaeda related threat in the aftermath of 9/11 BL: The public at large should not think that my case, you know, my role as an undercover police officer in the 1980s is in any way typical. Er, I made mistakes and that’s now, you know, that’s well understood but I can honestly say, hand on heart, that the overwhelming majority of my former colleagues on the Special Demonstration Squad, you know, behaved impeccably at all times in very-often in very dangerous and demanding situations BL: I have come to the view that it’s better if undercover work is kept to a minimum and that we should look at, and we should explore, other ways of working against these problems and that, you know, that leads on to the one bit of work in the Metropolitan Police that I am, er, genuinely proud of without any reservations and that was my work with the Muslim Contact Unit 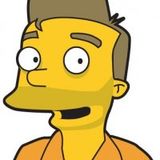