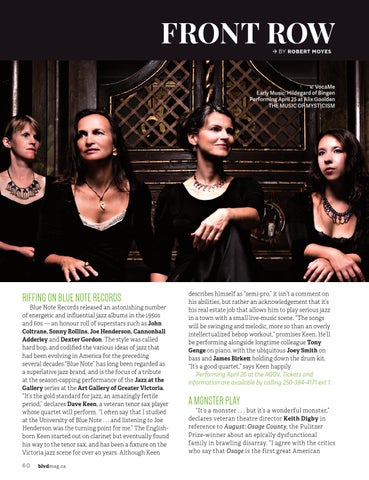 RIFFING ON BLUE NOTE RECORDS Blue Note Records released an astonishing number of energetic and influential jazz albums in the 1950s and 60s — an honour roll of superstars such as John Coltrane, Sonny Rollins, Joe Henderson, Cannonball Adderley and Dexter Gordon. The style was called hard bop, and codified the various ideas of jazz that had been evolving in America for the preceding several decades.“Blue Note” has long been regarded as a superlative jazz brand, and is the focus of a tribute at the season-capping performance of the Jazz at the Gallery series at the Art Gallery of Greater Victoria. “It’s the gold standard for jazz, an amazingly fertile period,” declares Dave Keen, a veteran tenor sax player whose quartet will perform. “I often say that I studied at the University of Blue Note . . . and listening to Joe Henderson was the turning point for me.” The Englishborn Keen started out on clarinet but eventually found his way to the tenor sax, and has been a fixture on the Victoria jazz scene for over 40 years. Although Keen 60

describes himself as “semi-pro,” it isn’t a comment on his abilities, but rather an acknowledgement that it’s his real estate job that allows him to play serious jazz in a town with a small live-music scene. “The songs will be swinging and melodic, more so than an overly intellectualized bebop workout,” promises Keen. He’ll be performing alongside longtime colleague Tony Genge on piano, with the ubiquitous Joey Smith on bass and James Birkett holding down the drum kit. “It’s a good quartet,” says Keen happily. Performing April 26 at the AGGV. Tickets and information are available by calling 250-384-4171 ext 1.

A MONSTER PLAY “It’s a monster . . . but it’s a wonderful monster,” declares veteran theatre director Keith Digby in reference to August: Osage County, the Pulitzer Prize-winner about an epically dysfunctional family in brawling disarray. “I agree with the critics who say that Osage is the first great American