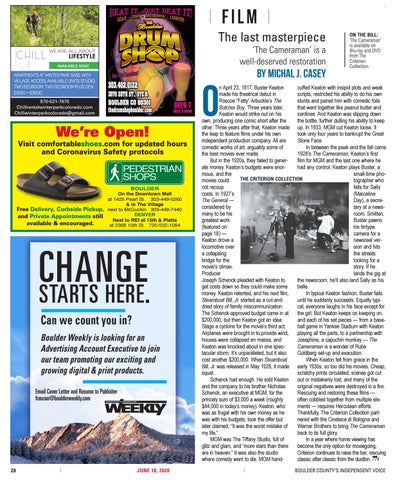 ‘The Cameraman’ is a well-deserved restoration

We are all about

CHANGE STARTS HERE. Can we count you in? Boulder Weekly is looking for an Advertising Account Executive to join our team promoting our exciting and growing digital & print products. Email Cover Letter and Resume to Publisher franzan@boulderweekly.com

ON THE BILL: ‘The Cameraman’ is available on Blu-ray and DVD from The Criterion Collection.

n April 23, 1917, Buster Keaton cuffed Keaton with insipid plots and weak made his theatrical debut in scripts, restricted his ability to do his own Roscoe “Fatty” Arbuckle’s The stunts and paired him with comedic foils Butcher Boy. Three years later, that went together like peanut butter and Keaton would strike out on his sardines. And Keaton was slipping down own, producing one comic short after the the bottle, further dulling his ability to keep other. Three years after that, Keaton made up. In 1933, MGM cut Keaton loose. It the leap to feature films under his own took only four years to bankrupt the Great independent production company. All are Stone Face. comedic works of art, arguably some of In between the peak and the fall came the best movies ever made. 1928’s The Cameraman, Keaton’s first But in the 1920s, they failed to generfilm for MGM and the last one where he ate money. Keaton’s budgets were enorhad any control. Keaton plays Buster, a mous, and the small-time phoTHE CRITERION COLLECTION movies could tographer who not recoup falls for Sally costs. In 1927’s (Marceline The General — Day), a secreconsidered by tary at a newsmany to be his room. Smitten, greatest work Buster pawns (featured on his tintype page 18) — camera for a Keaton drove a newsreel verlocomotive over sion and hits a collapsing the streets bridge for the looking for a movie’s climax. story. If he Producer lands the gig at Joseph Schenck pleaded with Keaton to the newsroom, he’ll also land Sally as his get costs down so they could make some belle. money. Keaton relented, and his next film, In typical Keaton fashion, Buster fails Steamboat Bill, Jr. started as a cut-anduntil he suddenly succeeds. Equally typidried story of family miscommunication. cal, everyone laughs in his face except for The Schenck-approved budget came in at the girl. But Keaton keeps on keeping on, $200,000, but then Keaton got an idea: and each of his set pieces — from a baseStage a cyclone for the movie’s third act. ball game in Yankee Stadium with Keaton Airplanes were brought in to provide wind, playing all the parts, to a partnership with houses were collapsed en masse, and Josephine, a capuchin monkey — The Keaton was knocked about in one specCameraman is a wonder of Rube tacular storm. It’s unparalleled, but it also Goldberg set-up and execution. cost another $200,000. When Steamboat When Keaton fell from grace in the Bill, Jr. was released in May 1928, it made early 1930s, so too did his movies. Cheap, squat. scratchy prints circulated, scenes got cut Schenck had enough. He sold Keaton out or mistakenly lost, and many of the and the company to his brother Nicholas original negatives were destroyed in a fire. Schenck, an executive at MGM, for the Rescuing and restoring these films — princely sum of $3,000 a week (roughly often cobbled together from multiple ele$44,000 in today’s money). Keaton, who ments — requires Herculean efforts. was as frugal with his own money as he Thankfully, The Criterion Collection partwas with his budgets, took the offer but nered with the Cineteca di Bologna and later claimed, “It was the worst mistake of Warner Brothers to bring The Cameraman my life.” back to its full glory. MGM was The Tiffany Studio, full of In a year where home viewing has glitz and glam, and “more stars than there become the only option for moviegoing, are in heaven.” It was also the studio Criterion continues to raise the bar, rescuing where comedy went to die. MGM handclassic after classic from the dustbin. I