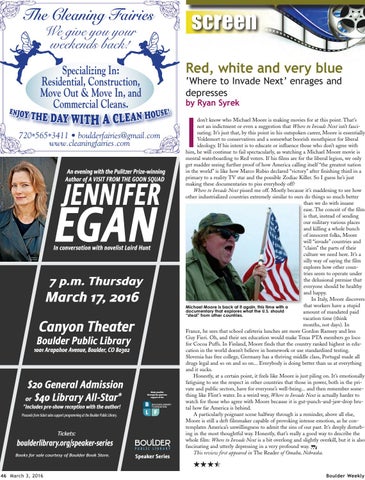 Specializing In: Residential, Construction, Move Out & Move In, and Commercial Cleans. E NJO USE ! Y THE DAY O H N A W I T H A C LE 720v565v3411 • boulderfairies@gmail.com www.cleaningfairies.com An evening with the Pulitzer Prize-winning Author of A VISIT FROM THE GOON SQUAD

Made possible through the generous support of the

screen Red, white and very blue ‘Where to Invade Next’ enrages and depresses  by Ryan Syrek

don’t know who Michael Moore is making movies for at this point. That’s not an indictment or even a suggestion that Where to Invade Next isn’t fascinating. It’s just that, by this point in his outspoken career, Moore is essentially Voldemort to conservatives and a somewhat boorish mouthpiece for liberal ideology. If his intent is to educate or influence those who don’t agree with him, he will continue to fail spectacularly, as watching a Michael Moore movie is mental waterboarding to Red voters. If his films are for the liberal legion, we only get madder seeing further proof of how America calling itself “the greatest nation in the world” is like how Marco Rubio declared “victory” after finishing third in a primary to a reality TV star and the possible Zodiac Killer. So I guess he’s just making these documentaries to piss everybody off? Where to Invade Next pissed me off. Mostly because it’s maddening to see how other industrialized countries extremely similar to ours do things so much better than we do with insane ease. The conceit of the film is that, instead of sending our military various places and killing a whole bunch of innocent folks, Moore will “invade” countries and “claim” the parts of their culture we need here. It’s a silly way of saying the film explores how other countries seem to operate under the delusional premise that everyone should be healthy and happy. In Italy, Moore discovers that workers have a stupid Michael Moore is back at it again, this time with a documentary that explores what the U.S. should amount of mandated paid “steal” from other countries. vacation time (think months, not days). In France, he sees that school cafeteria lunches are more Gordon Ramsey and less Guy Fieri. Oh, and their sex education would make Texas PTA members go loco for Cocoa Puffs. In Finland, Moore finds that the country ranked highest in education in the world doesn’t believe in homework or use standardized testing. Slovenia has free college, Germany has a thriving middle class, Portugal made all drugs legal and so on and so on... Everybody is doing better than us at everything and it sucks. Honestly, at a certain point, it feels like Moore is just piling on. It’s emotionally fatiguing to see the respect in other countries that those in power, both in the private and public sectors, have for everyone’s well-being... and then remember something like Flint’s water. In a weird way, Where to Invade Next is actually harder to watch for those who agree with Moore because it is gut-punch-and-jaw-drop brutal how far America is behind. A particularly poignant scene halfway through is a reminder, above all else, Moore is still a deft filmmaker capable of provoking intense emotion, as he contemplates America’s unwillingness to admit the sins of our past. It’s deeply disturbing in the most thoughtful way. Honestly, that’s really a good way to describe the whole film: Where to Invade Next is a bit overlong and slightly overkill, but it is also fascinating and utterly depressing in a very profound way. This review first appeared in The Reader of Omaha, Nebraska.