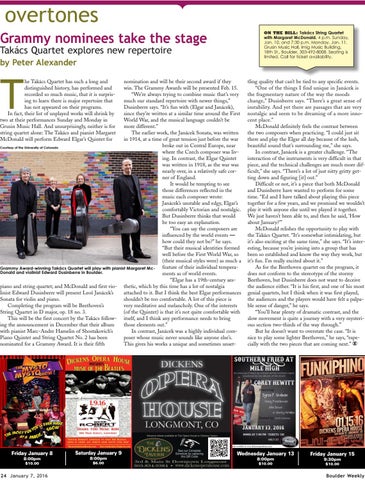 he Takács Quartet has such a long and distinguished history, has performed and recorded so much music, that it is surprising to learn there is major repertoire that has not appeared on their programs. In fact, their list of unplayed works will shrink by two at their performances Sunday and Monday in Grusin Music Hall. And unsurprisingly, neither is for string quartet alone: The Takács and pianist Margaret McDonald will perform Edward Elgar’s Quintet for

nomination and will be their second award if they win. The Grammy Awards will be presented Feb. 15. “We’re always trying to combine music that’s very much our standard repertoire with newer things,” Dusinberre says. “It’s fun with (Elgar and Janácek), since they’re written at a similar time around the First World War, and the musical language couldn’t be more different.” The earlier work, the Janácek Sonata, was written in 1914, at a time of great tension just before the war broke out in Central Europe, near Courtesy of the University of Colorado where the Czech composer was living. In contrast, the Elgar Quintet was written in 1918, as the war was nearly over, in a relatively safe corner of England. It would be tempting to see those differences reflected in the music each composer wrote: Janácek’s unstable and edgy, Elgar’s comfortably Victorian and nostalgic. But Dusinberre thinks that would be too easy an explanation. “You can say the composers are influenced by the world events — how could they not be?” he says. “But their musical identities formed well before the First World War, so (their musical styles were) as much a feature of their individual temperaGrammy Award-winning Takács Quartet will play with pianist Margaret McDonald and violinist Edward Dusinberre in Boulder. ments as of world events. “Elgar has a 19th-century aespiano and string quartet; and McDonald and first vio- thetic, which by this time has a lot of nostalgia linist Edward Dusinberre will present Leoš Janácek’s attached to it. But I think the best Elgar performances Sonata for violin and piano. shouldn’t be too comfortable. A lot of this piece is Completing the program will be Beethoven’s very meditative and melancholy. One of the interests String Quartet in D major, op. 18 no. 3. (of the Quintet) is that it’s not quite comfortable with This will be the first concert by the Takács follow- itself, and I think any performance needs to bring ing the announcement in December that their album those elements out.” with pianist Marc-Andre Hamelin of Shostakovich’s In contrast, Janácek was a highly individual comPiano Quintet and String Quartet No. 2 has been poser whose music never sounds like anyone else’s. nominated for a Grammy Award. It is their fifth This gives his works a unique and sometimes unset-

tling quality that can’t be tied to any specific events. “One of the things I find unique in Janácek is the fragmentary nature of the way the moods change,” Dusinberre says. “There’s a great sense of instability. And yet there are passages that are very nostalgic and seem to be dreaming of a more innocent place.” McDonald definitely feels the contrast between the two composers when practicing. “I could just sit there and play the Elgar all day because of the lush, beautiful sound that’s surrounding me,” she says. In contrast, Janácek is a greater challenge. “The interaction of the instruments is very difficult in that piece, and the technical challenges are much more difficult,” she says. “There’s a lot of just nitty gritty getting down and figuring [it] out.” Difficult or not, it’s a piece that both McDonald and Dusinberre have wanted to perform for some time. “Ed and I have talked about playing this piece together for a few years, and we promised we wouldn’t play it with anyone else until we played it together. We just haven’t been able to, and then he said, ‘How about January?’” McDonald relishes the opportunity to play with the Takács Quartet. “It’s somewhat intimidating, but it’s also exciting at the same time,” she says. “It’s interesting, because you’re joining into a group that has been so established and know the way they work, but it’s fun. I’m really excited about it.” As for the Beethoven quartet on the program, it does not conform to the stereotype of the stormy Beethoven, but Dusinberre does not want to deceive the audience either. “It is his first, and one of his most genial quartets, but I think when it was first played, the audiences and the players would have felt a palpable sense of danger,” he says. “You’ll hear plenty of dramatic contrast, and the slow movement is quite a journey with a very mysterious section two-thirds of the way through.” But he doesn’t want to overstate the case. “It is nice to play some lighter Beethoven,” he says, “especially with the two pieces that are coming next.”