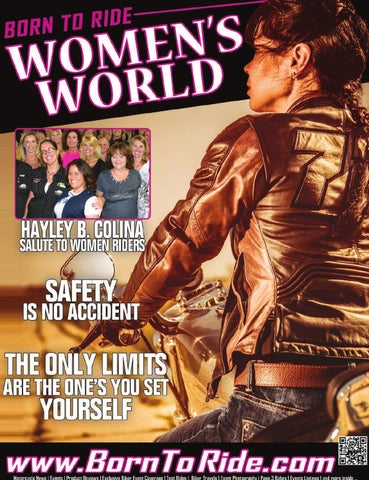 The nine-day, 2000-mile motorcycle and boating tour attracted 30 members of the boating industry including their friends, and travels up the east coast to Washington D.C., concluding with participation in the 100,000-bike rally, Rolling Thunder, which honors war veterans, POWs and MIA on Memorial Day weekend. “This ride is a celebration of freedom and the great outdoors,” said tour organizer and marine industry marketing veteran Wanda Kenton Smith. “Our tour is unique in that we combine the best of the open roads with the open seas in an adventure that promotes both motorcycling and boating

and waterfront festivities. Sarasota’s club hosted the kick-off launch party today, while clubs in Savannah and Myrtle Beach will host cookouts. The Freedom Boat Club in St. Augustine is sponsoring a boat ride and brunch at the historic Flagler College presidential dining room, while the Annapolis, MD club has arranged for tour participants to board club boats for a cruise on the Severn River to watch the Blue Angels as part of the U.S. Naval Academy graduation festivities. Historic sites and visits include the naval boats at Patriot’s Point in Charleston; a two-hour ferry trip and ride through the BTR WOMEN’S WORLD | BTR 55

Outer Banks with a stop at Kill Devil Hills at the Wright Brothers Kitty Hawk museum; Williamsburg, VA; the Harley-Davidson museum in York, PA; the Gettysburg battlefield which includes a customized group tour; and Thomas Jefferson’s beloved Monticello in Charlottesville. The finale of The Freedom Ride culminates in Rolling Thunder, an escorted tour on Sunday, May 24 that runs from the Pentagon to the Viet Nam Memorial Wall. The Freedom Ride is the second event hosted by the Boaterz ‘n Bikerz group. The inaugural ride traveled 3000 miles from Destin, FL to San Diego, CA in 2012. “Our corporate organization along with our franchisees are excited to serve as title sponsor of The Freedom Ride and to support an effort that celebrates the fun and freedom of the outdoor life,” said Freedom BTR 56 | BTR WOMEN’S WORLD

Boat Club CEO and President John Giglio. Freedom Boat Club (www.freedomboatclub.com) has 86 locations in 19 states coast-to-coast, with 10,000 active members and a fleet of 850 boats nationwide. And now a quote from Wanda Kenton Smith: “I love God, I love America, I love my family. And baby, I love boating and motorcycling!” When it comes to my life’s passions, that’s everything rolled up into a few choice words. As it relates to boating and motorcycling, there’s no place on Earth I’d rather be than at the helm or behind the wheel of a magnificent, sleek machine. I love the feeling of raw power and the sense of freedom that is unleashed as you throttle forward and discover stunning new horizons.

Nothing feels better than the wind in your hair and the sun on your face. I love the sights and sounds and smells of the open water and the open road. When you’re out there, everything is intensified. You just experience unbridled joy and exhilaration at every turn. That’s what led me to organize the first Boaterz n Bikerz of America Hull of a Tour in 2013, which combined boating and motorcycling in a cross-country, 3,000-mile adventure from Florida to California. That awesome tour took us from the flat lands of Florida to the plains of Texas, from the bright lights of Las Vegas to the mountains of New Mexico, and from the Mojave Desert in California to splashdown in San Diego. All along the trail we enjoyed unique boat-

ing activities, from the Legendary Marine Yacht Club in Destin, Fla., with dinner at the harbor, to the sunset cruise aboard the 90-foot Miss Texas, compliments of Marinas International in Grapevine, Texas, to the ultimate power yacht and sailboat ride aboard spectacular Beneteaus in San Diego provided by sponsor South Coast Yachts. The last question on everybody’s parched lips at the conclusion of the tour: “When’s the next ride?” It’s a week away! Here we are two years later, preparing to launch this year’s Hull of a Tour, The Freedom Ride, sponsored by the Freedom Boat Club, along with Hurricane Boats, Soundings Trade Only and Kenton Smith Marketing. This year’s adventure revs up on May 15

from Sarasota, Fla., and winds up the East Coast for 2,000 glorious miles, snaking through a variety of historic ports of call charted by our road captain, Jim Krueger of Regal Marine. Along the way, there will be boating parties hosted by Freedom Boat Club franchise owners in Sarasota and St. Augustine, Fla.; Savannah, Ga.; Myrtle Beach, S.C.; and Annapolis, Md. The latter event will include a command performance by the Blue Angels as we watch aboard club boats on the Severn River. We’re taking a ferry and riding through the Outer Banks, plus touring naval ships in Charleston, S.C., the Harley-Davidson factory in York, Pa., the Gettysburg battlefield and Thomas Jefferson’s beloved Monticello.

The grand finale sweeps us into the nation’s capital on Memorial Day weekend, where our band of merry boaters and bikers will proudly join Rolling Thunder, a 100,000bike escorted ride from the Pentagon to the Vietnam Veterans Memorial Wall in celebration and memory of POWs, MIAs and war veterans. I hope you’ll come along and join me for The Freedom Ride as I blog daily during the trip right here from my perch at Soundings Trade Only. It’s going to be one hull of a tour!” For more information visit http://www.kentonsmithmarketing.com/ hull-of-a-tour.html Contact Wanda Kenton Smith (407) 697-8055 email wanda@freedomboatclub.com BTR WOMEN’S WORLD | BTR 57