boiMAG.com "House Is A Feeling" Tuning In Article 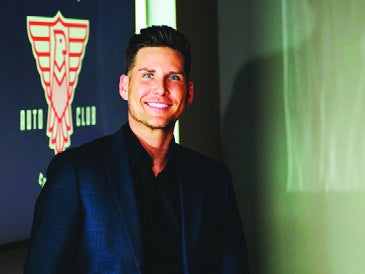 In last months issue I interviewed Georgie Porgie, who at the birth of House, was one of the youngest producers/DJs on the scene. The other, is Kaay Alexi Shelby. With that in mind, I thought I’d chat with Kaay to get his perspective on the scene, and see what he’s been up to.

Q: Kaay, you’ve mentioned to me in prior conversations that your mom would bring home boxes of records that you’d play with as a kid, and soon start mixing. At what point did you realize it was something you wanted to do professionally?

A: I believe I was around 12 years old when I started receiving these records. I was happy to get any gift for my mom, and still am even to this day, but I don’t think it was until age 14 that I realized how much I really enjoyed the music.

Q: What were some of the events that led you to that realization?

A: Seeing one of my musical heroes Ron Hardy at the Music Box and seeing his impact and just pure showmanship, how he took the crowd on a journey. Seeing that made me really want to be part of that movement, to be a full part of the culture.

Q: You started playing in clubs when you were still underage, how did you fly under the radar?

A: I didn’t “really” do a club until (I was still just a kid I guess) I was 20, but I played the community center and things like that in my younger years. Flying under the radar would only get you so far, sometimes I could get in, sometimes I couldn’t. It was very “interesting” and strict back then in certain ways.

Q: You progressed really quickly from playing the so-called downtime spots to headlining, can you tell our readers a bit about that journey and any especially fond memories that come to mind?

A: By the time I was older and realized this was no longer a hobby or a part-time job, but something that could actually be my career, I was maybe 20 to 23? I got taken under the wings of some of the greats, from Frankie Knuckles to Robert Owens, to Ron Hardy, to Larry Heard, to Mr. Lee, to even one of my fondest roommates and brothers (still to this day), Mike Dunn, who taught me then, and even now, that preparation is key paramount.

Q: DJ’ing aside, you’re also a prolific producer, who as I mentioned earlier helped shape the sound of numerous genres and sub-genres of House. What are your thoughts on the ever-narrower classifications of music?

A: For us, it was just music. If it had a name, I didn’t really know what it was, I just knew that I had to be a part of it because the city was swarming and buzzing with energy over this new thing. It was taking hold of people here in the city. Later it would be called house music. Techno for us in Chicago wasn’t the same as what was made in Detroit. For us in Chicago, we still had that 4x4, with tracks like Circus Bells, by brother Robert Armani, and Acid Over by brother Tyree Cooper, Lost Control by my big brother Marshall Jefferson, or Washing Machine big brother Larry Heard or even the Acid Originators, brothers Spanky and DJ Pierre of Future & my own brand of tech. From Club MCM Stick Music to my Detroit debut album on Transmat with All for Lisa, Vertigo, and My Medusa - which would later be branded as a blueprint for many styles that I gave birth to around the world.

Q: You’ve been making a bunch of music, which we’ll get to in a minute, but before we do so, I’d love to ask how you’ve handled the pandemic, and how it’s shaped your performances and marketing over the last year.

A: I think being back home, as opposed to living abroad. It was wild having your freedom just taken away from you like that without any warning, or forethought of what will come next, being close to my family as I am, was a huge challenge. Having music around me, as always, has helped me stay productive and sane.

Q: If you had to pick your three favorite songs from your discography, what would they be?

A: All For Lisa, Essence Of A Dream, My Medusa

Q: What’s your favorite current song, from another artist or producer?

A: Mike Dunn “If I can’t get down“ it’s just a super fun song, it will lift your spirit!

Q: When I last spoke to you, God’s People was just about to come out, are there any other recent releases we should be checking out?

A: Many things are on the horizon that I hope to share with the world very soon. I’m doing waaay more collaborating with younger artists, and different artists. Males and females, just people that I deem can inspire each other, so I’ll keep a hush on that right now, but for those that know me, I’m always recording and there’s always something special in Band-Camp, or some things you can dig out of the past on me that you didn’t even know.

Q: What are some of your upcoming releases/collaborations, anything on the horizon that you can tell us about?

A: Well I just did a remix of Robert Owens and KC with Roy Davis Jr. added to the mix. A compilation that I’m putting together with music from Joe Smooth, Tyree Cooper, Roy Davis, Junior KC, Ryan Reynolds Glenn Underground, DJ Pierre, and fingers crossed, my brother Moody Man.

Q: Are you back out performing, and if so where can we see you? If not, are you doing any streams online?

A: I’m back out doing live-streams for now, which can be found all over the place, including Beatport and YouTube, BUT...but, let the record state, I didn’t get my shots just so I can be sitting around! I’m ready to get back out into the world.

Q: Kaay, there’s so much more I’d love to chat with you about, but I have limited space. Is there anything you’d like to share as a closing thought?

A: I would like for there to be way more respect and more of a connection/ acknowledgment for those that came before. I’d like for there to be less sampling of those artists and more true collaborations. Because...when you look down from the top of the mountain you’ll be standing on many shoulders of all the people that helped put you there. So remember that as you fist pump and talk about how great you are!

One of Kaay’s more recent tunes, God’s People (mentioned above), also happens to be on the forthcoming Jack Master 7 album, from Chicago House record label, DJ International Records. This is arguably the most important house music collection in over a decade. I don’t just say that because I’m also featured artist on the album, but due to the incredible selection of new and unreleased tunes from legendary House Music producers such as Frankie Knuckles, Rocky Jones, Chip-E, Chuck Roberts, Meechie, Sterling Void, State of Rhythm and Loleatta Holloway to name a few. And...If that wasn’t enough there are appearances from disco super stars The Richie Family, and music royalty, Bobby Willson.

The Jackmaster 7 compilation comes out in digital format on September 24th, with a three disc limited edition vinyl run to follow soon after.

Nicky Roland is a house music producer originally from the UK, now based in Denver, CO - Find him on Spotify and on Twitter @nickyrolandmusic