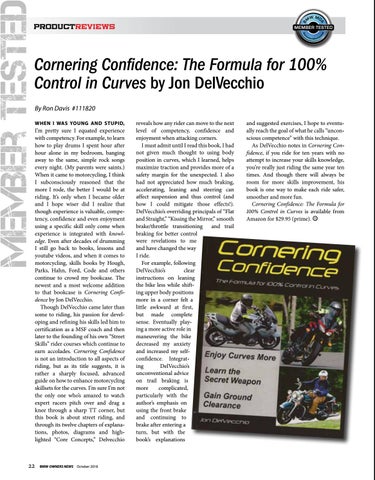 Cornering Confidence: The Formula for 100% Control in Curves by Jon DelVecchio By Ron Davis #111820 WHEN I WAS YOUNG AND STUPID,

I’m pretty sure I equated experience with competency. For example, to learn how to play drums I spent hour after hour alone in my bedroom, banging away to the same, simple rock songs every night. (My parents were saints.) When it came to motorcycling, I think I subconsciously reasoned that the more I rode, the better I would be at riding. It’s only when I became older and I hope wiser did I realize that though experience is valuable, competency, confidence and even enjoyment using a specific skill only come when experience is integrated with knowledge. Even after decades of drumming I still go back to books, lessons and youtube videos, and when it comes to motorcycling, skills books by Hough, Parks, Hahn, Ford, Code and others continue to crowd my bookcase. The newest and a most welcome addition to that bookcase is Cornering Confidence by Jon DelVecchio. Though DelVecchio came later than some to riding, his passion for developing and refining his skills led him to certification as a MSF coach and then later to the founding of his own “Street Skills” rider courses which continue to earn accolades. Cornering Confidence is not an introduction to all aspects of riding, but as its title suggests, it is rather a sharply focused, advanced guide on how to enhance motorcycling skillsets for the curves. I’m sure I’m not the only one who’s amazed to watch expert racers pitch over and drag a knee through a sharp TT corner, but this book is about street riding, and through its twelve chapters of explanations, photos, diagrams and highlighted “Core Concepts,” Delvecchio

reveals how any rider can move to the next level of competency, confidence and enjoyment when attacking corners. I must admit until I read this book, I had not given much thought to using body position in curves, which I learned, helps maximize traction and provides more of a safety margin for the unexpected. I also had not appreciated how much braking, accelerating, leaning and steering can affect suspension and thus control (and how I could mitigate those effects!). DelVecchio’s overriding principals of “Flat and Straight,” “Kissing the Mirror,” smooth brake/throttle transitioning and trail braking for better control were revelations to me and have changed the way I ride. For example, following DelVecchio’s clear instructions on leaning the bike less while shifting upper body positions more in a corner felt a little awkward at first, but made complete sense. Eventually playing a more active role in maneuvering the bike decreased my anxiety and increased my selfconfidence. Integrating DelVecchio’s unconventional advice on trail braking is more complicated, particularly with the author’s emphasis on using the front brake and continuing to brake after entering a turn, but with the book’s explanations

and suggested exercises, I hope to eventually reach the goal of what he calls “unconscious competence” with this technique. As DelVecchio notes in Cornering Confidence, if you ride for ten years with no attempt to increase your skills knowledge, you’re really just riding the same year ten times. And though there will always be room for more skills improvement, his book is one way to make each ride safer, smoother and more fun. Cornering Confidence: The Formula for 100% Control in Curves is available from Amazon for $29.95 (prime).

October 2018 edition of the BMW Owners News, a publication of the BMW Motorcycle Owners of America. Inside, you'll find : A member profile: Marina Ackerson by Ron Davis #111820 With all of the tables in the food area taken, Ron Davis saw a woman sitting alone at a table for four. The conversation that followed left Davis believing he had met the quintessential motorcyclist. Boots by Ken Frick #199204 It was a single boot atop a fence post in rural Nebraska that first caught Ken Frick’s attention. Stopping to take a closer look, Frick realized he had stumbled upon sacred ground. Music and Motorcycling By Doug McBride #6642 Looking to add music to his cinematic masterpieces, Doug McBride scoured the web, and along the way discovered some great motorcycle music available for download. A Massachusetts track day by John Gamel #153274 When an early retirement took a toll on John Gamel’s excitement index, getting back into motorcycling was all Gamel needed to find the rush he was missing. 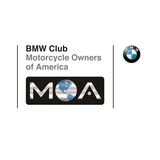