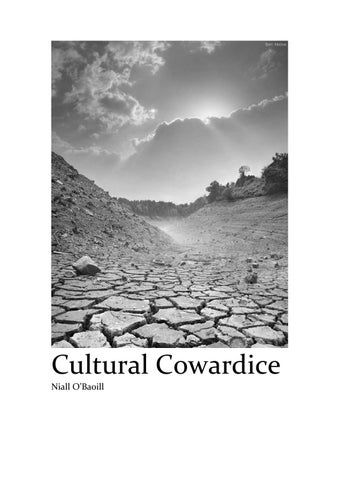 Contemporary arts policy and practices in Ireland and their failure to engage citizens and neighbourhoods in the process of community arts and socially engaged arts practices. In the coming weeks I will be tramping a road leading from Selma to Montgomery in the State of Alabama. In anticipation of this journey to the heartland of the Civil Rights Movement in the USA - within earshot of Martin Luther King’s bold concept of The Beloved Community - I make no apology for choosing to talk plainly of an unacceptable cultural apartheid that persists in my country. Ireland is constantly promoting its image abroad as a proud, deeply cultural and artistically literate nation, capable of the most inspired gestures of soulful and searching concern for the human condition – and redoubtable in its commitment to global justice. Yet all sorts of evidence belies this. As a close friend and life- long Buddhist meditation retreat master – reflecting on our particular condition – once remarked, with a great laugh “Sure, we’re fucked- but that’s no reason to be negative!” Ireland, despite its prodigious cultural and artistic outputs for which it is widely recognised, is nonetheless one of the most inequitable societies in the western world. Not just in the material or conventional sense, but also with respect to meeting the cultural rights and needs of its citizens. It is only a small section of our society that enjoys the opportunity to be educated and empowered through the richness of the arts, either as distinct languages and intelligences or as a primary source of ‘meaning making’ and identity. Since the advent of the first State Cultural policy in the mid 1980’s and through all subsequent National Arts Plans – despite an unequivocal commitment to broadening public access and participation in the arts – there has been no significant strategic investment or support. As a consequence successive generations of citizens have remained artistically and aesthetically underdeveloped. The price of which is reflected in impoverished models of public education and by extension a less culturally alert, critical and creative society. The drift to passivity and consumerism and all the democratic deficits this engenders is now a chronic problem on this Island Ironically this lack of public purchase or agency on the arts is also the primary cause of the arts establishment continuing to be perceived / experienced as elitist, peripheral to the economy and largely irrelevant to the main currents of Irish social and political life. The 40% reduction in State funding to the Arts in recent years is a classic illustration of this reality This condition of cultural stasis is obdurate despite the best efforts of a community arts movement in Ireland that has existed for more than 30 years - in both rural and urban areas, north and south of the border. This movement – through many manifestations - has regularly campaigned for meaningful change and innovation in the field of participatory arts. This ground- up, community-based network of children’s, youth and local development and regeneration projects has been led in the main by community workers and small numbers of skilled and passionate artists and arts organisations. Sadly it has invariably been ignored, patronised and on occasions, even appropriated and exploited to suit other political agendas. When one looks to the source of such institutional and systemic neglect, it invariably leads to the negative or narrow-minded role, not alone of the State and the various bodies charged with the development of the arts in Ireland, but also to the arts world itself – and in particular, the dominant models of arts provision and the systems supporting them.

I can quote numerous arts led or social and economic research processes and publications which reinforce this view and call for change. But such milestones have generally been met with indifference and occasional bursts of hostility when their reflections, findings and recommendations are brought into the public domain. Such matters are noted intellectually but are hastily relegated within the exigencies of an overly dependent and inured establishment. It seems the dominant model cannot, or will not, see the connections between this state of abandonment and how it corrodes the very future of the arts sector itself by undermining the scope and power of enlightened artistic visioning, potential career paths and decent living and working conditions for artists. This muddled armature spanning third level arts education; full time practising artists; arts organisations, and; the attendant curatorial and administrative infrastructure, continues to function within a restrictive set of relationships and engagements with the broader society – virtual cul de sacs in all but name. It seems to me that so many of these staid transactional ways of operating continue to be wishful, wasteful and self-aggrandising. Such myopia disregards the wider communal cultural ecology in which the common-good, transformative potential of the arts – in effect the power to feel and transform one’s self in relation to others – might be more fully harnessed. It appears to be a clear-cut case of cultural cowardice. For what could be more fair and dynamic than to enable more open systems of community based arts provision and dialogues? Processes that could in turn; catalyse fresh sets of understandings around contemporary culture, the developmental role of the arts and the unique and needed contribution of artists. Powered together, these could help Ireland develop resilience in the face of unprecedented economic, social and cultural threats. Community, no matter what your definition – geographic, identity or interest based – can provide fertile ground in which such vital cultural discourses and experimentations might occur. I have knowledge of not dissimilar initiatives in many North American situations – ones with proven outcomes. My direct experience – particularly in recent decades in Ireland – has demonstrated that practical synergies can be found between the context of community and the distinct pedagogical skills and vocational identity of arts students, committed artists and lead arts organisations. Such work, if tackled properly, requires courageous forms of: • Inquiry/action-research • Trust building/respect for a diversity of narratives and expression/equality of relationships and roles • Risk taking • Understanding of different and complementary skills sets • Shared production and evaluative documentary processes • A long term, big picture view • Clear means of affirming and celebrating the experiences involved It seems to me that even the academically coined label ‘socially-engaged arts practice’ reveals a subtle but powerful desire on some parts of mainstream culture to box off the movement on its own terms - as though it is a new and sacrosanct ‘discovery’ worthy of only the most singular and erudite of new wave practitioners.

Community arts is perceived by these ‘gatekeepers’ of contemporary culture as an opportune extension to existing cultural norms – the relationship is essentially predatory and acquisitive. This attitude – whether conscious or unintentional –seems to elevate the status of individualistic interpretations of social contexts and subjects rather than supporting a more pluralistic or respectful, interdependent perspective. But why is there such intransigence? Why such a chronic inability to embrace natural, common sense propositions in which reforms of a largely redundant model of cultural provision could conceivably yield significant dividends to our various educational, economic, artistic and civil society functions? This impasse is especially strange given that the Irish Government last year enacted a Human Rights and Equality Act, which among other things, defines its clear public duty to protect and vindicate the cultural rights of all citizens. Meanwhile, a Joint Parliamentary Committee on Art and Social Inclusion also published its findings in recent months recommending that new policies and mechanisms be implemented to deliver improved provision and support to the community/participatory arts movement. Regrettably there appears to be blanket denial of the importance of these measures for the State or for their possibly transformative impacts for the formal arts sector. It is a very bizarre and unprecedented situation, likely find it strange expression at the forthcoming scheduled appearance of the Irish Government before the UN International Covenant on Social, Economic and Cultural Rights in June of this year. For the first time in the history of the State, Ireland will be taken to task concerning its failures to deliver on its own stated commitments and responsibilities with respect to Arts and Culture. One can only imagine political evasions, diversions and confusion in this forum - for successive Governments have presided over the ongoing systematic exclusion of vast numbers of children, young people, disadvantaged communities and ethnic minorities. Against endemic social exclusion, these are people whose vital sense of cultural identity and their need to strengthen their creative and critical faculties can no longer, in conscience, be ignored. In 2016 we mark the centenary of the Easter Rising – the revolutionary act that precipitated the establishment of the Irish Republic. A period of intense cultural and political debate will no doubt ensue - one in which hopefully the plaintive words of a lonely poet might yet find sufficient resonance to challenge this prevailing cultural cowardice: Culture is always something that was Something pedants can measure Skull of Bard Thigh of Chief Depth of dried up river Shall we be thus forever? Shall we be thus forever? ---The lines quoted at the foot of the article are those of Patrick Kavanagh, excerpt from his poem Memory of Brother Michael 14th October 1944 (Collected Poems, MacGibbon &amp; Kee, 1964, 1968, p.84.)

Niall O Baoill is a fifty five year old friend of learning and sometimes community / youth and cultural / arts practitioner. He is a co-producer of the Community Culture Strategy. This is an edited version of an article which appears courtesy of the National College of Art and Design. The article will be published in SEAN - A socially engaged art newspaper in partnership with Stockyard Institute, Chicago. [VIP]

Niall O'Baoill from a blog piece to highlight the Irish Government 's appearance before the UN Committee on Social, Economic and Cultural Rights in June 2015. Commissioned and published by SEAN - A socially engaged art newspaper. NCAD, Dublin and Stockyard Institute, Chicago