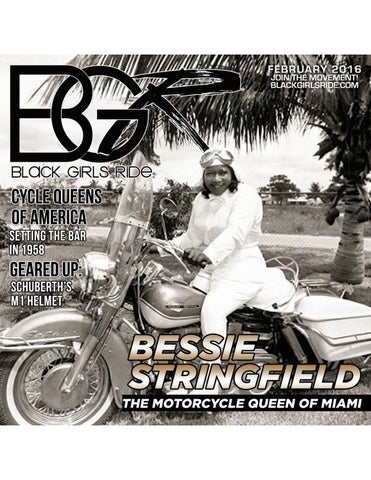 etâ&amp;#x20AC;&amp;#x2122;s take a look back into history to meet the trail blazing women of the Cycle Queens of America, the first Motorcycle Club founded by African American women. Known for riding hundreds of miles, and a clean cut image, the Cycle Queens set a high standard for all female motorcycle clubs... Want your club featured? Email us! blackgirlsridemag@gmail.com

In 1958 Delores Davis was determined to share her passion for riding with others. She partnered with her friend Margaret Bonham to start The Cycle Queens of America. While the Cycle Queens were founded by black women, they were an integrated club. After seeking membership in the Motor Maids Motorcycle Club and being denied membership based on race, they wanted to create a sisterhood on ground that welcomed all who shared a love for motorcycles, transcending color. Founded in Philadelphia, the Cycle Queens expanded nationwide, and often took road trips to Mexico and Canada. The Cycle Queens eventually grew to 25 members across 8 states, ranging from age 23 – 65. They were a recognized club in the American Motorcyclist Association (AMA), and competed often in AMA sanctioned events. They held meets and events to raise money for charity, and were all about the ride. The Cycle Queens wore uniforms of Red and White, and were often awarded for their sharp dress. Known for their competitive spirit, they preferred stunt events over drag racing. To be a Cycle Queen, you had to ride 100 miles on a trip. By today’s standards, 100 miles may not sound like much. But let’s take a trip back in time and imagine what it was like to ride on a bike in the 1950’s… with a modest suspension, smaller engine, and none of the creature comforts we’ve come to love. These women were true cross country riders. They would actually ride in Husband and Wife teams, with the men riding in the back, and kids in sidecars! We salute the Cycle Queens of America for paving the way for those of us who pound today!

magine riding through the southern US in the 1930’s and 40’s on your Harley. Not the comfortable, stabilized bikes of today… you ride the shaky, heavy bikes of the past that broke down often. The belt you wear isn’t a fashion statement, it’s to protect your kidneys while you ride. And, you ride thousands of miles, from one event to another, where you stunt or race, using the prize money to fund your trips. Your bike isn’t the only thing shaky during these times. You’re riding through the Jim Crowe South, where you’ve been run off the road by those offended simply by the audacity of a Black Girl Riding. You’ve been told “nigger women are not allowed to ride motorcycles” by the local police. Yet, you remain unbothered. You demonstrate your skills to earn their respect, and leave their bigotry in the dust. Some nights, you sleep on your bike, simply because there’s no room for your kind. You make sure you pack food too, just in case you can’t get served a meal. You made it across country 8 times, and let the wind guide you, chosing your trips at the drop of a penny. You never let race or gender keep you off your bike or away from your goals. You’re Bessie Stringfield, Motorcycle Queen of Miami. Here, we are afforded a glimpse into Bessie’s life from two sources: Ann Ferrar, personal friend and biographer of Ms. Stringfield and author of the 1996 book Hear Me Roar: Women, Motorcycles and the Rapture of the Road, and historian Euell A. Nielsen, contributor to BlackPast.org. Bessie Stringfield was born Betsy Lenora Ellis on February 9, 1911, in Kingston, Jamaica. She was the daughter of Maria Ellis, a domestic servant, and James Ferguson, her employer. Betsy and her parents migrated to Boston, Massachusetts, but both died of small pox. Betsy, was five years old, when she was orphaned and adopted by a wealthy Irish Catholic woman. Betsy then became Bessie, or BB, as she was known to family and friends.

In 1927, Bessie was given her first motorcycle, and Indian Scout, for her 16th birthday. She didn’t know how to ride, but quickly became an expert. At 19, Bessie began her “Penny Rides”. She would toss a penny on to a map, and plan a trip to that destination. Between the 1930s and the early 1940s, Bessie made eight longdistance solo rides across the United States. She would stop in each city and compete in races or perform stunt shows to earn money for her trips. Segregation was the order of the day during her era, but Bessie never let it deter her. When she was often denied accomodations while traveling, Bessie would often stay with local families or sleep on her bike at service stations. During Warld War II, Bessie worked for the U.S. Army as a civilian motorcycle dispatch rider, carrying documents between domestic bases on her Harley. She served as the only woman in her unit, after completing a rigourous training. She learned how to weave a makeshift bridge from rope and tree limbs to cross swamps. Bessie regularly encountered racial prejudice while on the road. She was once followed by a man who deliverately ran her off the road, knocking her off her bike. With all of her travels, it’s a wonder how Bessie managed to find time to get married and divorced 6 times. She and her first husband were deeply saddened by the loss of three babies. She didn’t have any children, but had pet dogs that she loved, and often traveled with. Her third husband, Arthur Stringfield asked her to keep his name, she says “because I’d made it famous!”

By the early 1950s, Stringfield ended her motorcycle odysseys across the United States. She bought a house in Miami, Florida, suburb and became a licensed practical nurse. She continued to ride locally, however, and founded the Iron Horse Motorcycle Club. Disguised as a man, Stringfield won a local motorcycle race but was denied the prize money when she took off her helmet. Her other antics, including riding her Harley while standing in its saddle, attracted local press attention. Reporters called Stringfield, the “Negro Motorcycle Queen” at first and then later the “Motorcycle Queen of Miami.” In the absence of children, she found joy in her pet dogs, some of whom paraded with her on her motorcycle. In 1990 when the American Motorcycle Association (AMA) opened the first Motorcycle Heritage Museum in Pickerington, Ohio, Stringfield was featured in its inaugural exhibit on Women in Motorcycling. Late in life, Stringfield suffered from symptoms caused by an enlarged heart. She died in Opa-laka, Florida, in 1993 at the age of eighty-two. A decade later, the AMA instituted the Bessie Stringfield Award to honor women who are leaders in motorcycling. In 2002 she was inducted into the Motorcycle Hall of Fame.

uring a hot, long ride, an open face helmet can offer you the comfort and ventillation you need to fully enjoy your experience. Our friends at Schuberth offer their new Metropolitan 1 helmet (M1), with the attention to detail that makes Schuberth stand head and shoulders above the others. FIRST IMPRESSION: Right out of the box, the M1 is visually stunning. The matte black paint and titanium vents give it a futuristic look. It includes an optical class face shield, drop down sunvisor, built in boomless mic and headphones. The optional SRC System snaps easily into the back of the helmet to activate the built in components.

THE REVIEW: The M1fits great. It’s not too snug in the crown and the antibacterial, breathable cheek pads are very comfortable. The sizes range from XS to XXXL, ensuring you’ll find a perfect fit. Coming in at 3 lbs, The helmet is light and airy. You’ll love the light feel on a long distance ride. On the road, the wider, longer visor seems to open up the world around you. You’ll notice a huge increase in visibility. The visor drops below your chin, and helps to quiet the wind noise. The air vents at the top and back allow for plenty of fresh air to circulate. With it’s top of the line SRC System, featuring a boomless mic, this promises to be a favorite helmet during our summer rides!

hanks to our girls who came out to join us on Jan 31 for the first BGR Ride of the year! We went Off to the Races in Apple Valley, CA to support our Road Racing Ambassador, SJ Harris of Threader Racing and Team MotoGirl GT, an all female road race and mini GT race team. They were here to compete in their first race of the United Mini Racing Association (UMRA). These ladies will gave the guys a run for their money in an endurance race, with a fourth place team finish, out of 33 teams! We met at LA Harley of Anaheim for a light continental breakfast and great giveaways, courtesy of Law Tigers, LA Harley of Anaheim and Black Girls Ride Magazine. The weather was brutal, so we opted to drive out to Apple Valley instead to show our support. Special thanks to Cali Cat, SeCCRet, Dynamiq, SheBoogie and Kitty for taking the ride. The BGR Rider Award goes to BEE Nice, who road her Suzuki Hayabusa from San Bernadino to Apple Valley for the races! She dealt with zero visibility, and high winds! SJ lead the pack for most of her relay, but on her way to the pits, she got bumped by another rider. She was ok, and with little damage to the bike, the next Motogirl GT team member got back in the race. SJ signed autographs and posed for pics with us. She was super cool and honored to have us there to support her. Thanks to Ryan and the United Mini Racing Association team for providing us links and burgers for lunch. Even through the harsh conditions, we had an awesome time, and will definitely be back again!

ur BGR Staff Writer, Sarah â&amp;#x20AC;&amp;#x153;SeCCRetâ&amp;#x20AC;? Moreau hosted the first ever Long Distance Rider Orientation on Saturday, February 6, in Long Beach, California. SeCCRet will be taking her 9th cross country trip to Miami, along the Bessie Stringfield Ride, June 22 - 26. She hosted the long distance rider orientation to help ladies prepare for the journey. SeCCRet brought all of the items she packs on her bike and spoke on their importance. She covered everything from camping gear, maps and almanacs to tools. She discussed varying laws, and the importance of researching before your trip. The orientation was well attended by riders looking to travel across state lines and veteran ground pounders who graciously shared their tips. SeCCRet will share her preparation powerpoint on blackgirlsride.com for free. Look for upcoming orientations, including the CPR Certification Class on March 12, and the Road Captain Orientation on April 9.

1916 Adeline and Augusta Van Bur en were the

This issue is dedicated to those ladies who paved our way. We pay homage to the Cycle Queens of America, the first Female MC founded by African American women. We'll meet Bessie Stringfield, the Motorcycle Queen of Miami. We'll join Sarah "SeCCRet" Moreau for a Long Distance Rider Orientation. We'll go Off to the Races with Road Racer, SJ Harris. And, we'll get Geared Up with Schuberth's Metropolitan 1 Helmet. 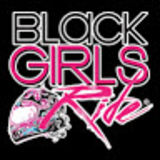