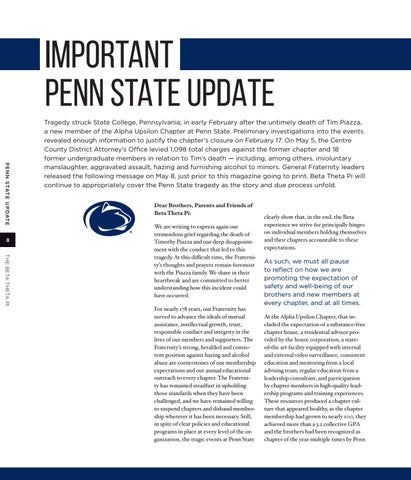 Tragedy struck State College, Pennsylvania, in early February after the untimely death of Tim Piazza, a new member of the Alpha Upsilon Chapter at Penn State. Preliminary investigations into the events revealed enough information to justify the chapter’s closure on February 17. On May 5, the Centre County District Attorney’s Office levied 1,098 total charges against the former chapter and 18 former undergraduate members in relation to Tim’s death — including, among others, involuntary manslaughter, aggravated assault, hazing and furnishing alcohol to minors. General Fraternity leaders released the following message on May 8, just prior to this magazine going to print. Beta Theta Pi will continue to appropriately cover the Penn State tragedy as the story and due process unfold. Dear Brothers, Parents and Friends of Beta Theta Pi:

We are writing to express again our tremendous grief regarding the death of Timothy Piazza and our deep disappointment with the conduct that led to this tragedy. At this difficult time, the Fraternity’s thoughts and prayers remain foremost with the Piazza family. We share in their heartbreak and are committed to better understanding how this incident could have occurred. For nearly 178 years, our Fraternity has served to advance the ideals of mutual assistance, intellectual growth, trust, responsible conduct and integrity in the lives of our members and supporters. The Fraternity’s strong, heralded and consistent position against hazing and alcohol abuse are cornerstones of our membership expectations and our annual educational outreach to every chapter. The Fraternity has remained steadfast in upholding those standards when they have been challenged, and we have remained willing to suspend chapters and disband membership wherever it has been necessary. Still, in spite of clear policies and educational programs in place at every level of the organization, the tragic events at Penn State

clearly show that, in the end, the Beta experience we strive for principally hinges on individual members holding themselves and their chapters accountable to these expectations.

As such, we must all pause to reflect on how we are promoting the expectation of safety and well-being of our brothers and new members at every chapter, and at all times. At the Alpha Upsilon Chapter, that included the expectation of a substance-free chapter house, a residential advisor provided by the house corporation, a stateof-the art facility equipped with internal and external video surveillance, consistent education and mentoring from a local advising team, regular education from a leadership consultant, and participation by chapter members in high-quality leadership programs and training experiences. These resources produced a chapter culture that appeared healthy, as the chapter membership had grown to nearly 100, they achieved more than a 3.2 collective GPA and the brothers had been recognized as chapter of the year multiple times by Penn