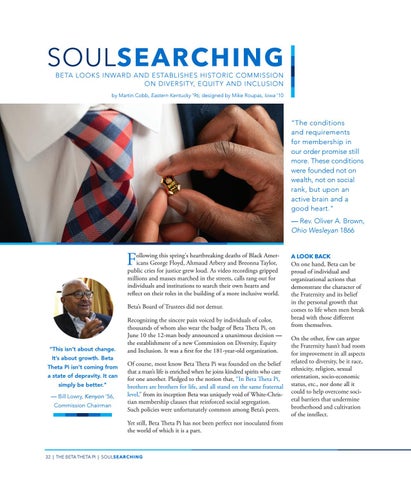 “The conditions and requirements for membership in our order promise still more. These conditions were founded not on wealth, not on social rank, but upon an active brain and a good heart.&quot; — Rev. Oliver A. Brown, Ohio Wesleyan 1866

ollowing this spring&#39;s heartbreaking deaths of Black Americans George Floyd, Ahmaud Arbery and Breonna Taylor, public cries for justice grew loud. As video recordings gripped millions and masses marched in the streets, calls rang out for individuals and institutions to search their own hearts and reflect on their roles in the building of a more inclusive world. Beta’s Board of Trustees did not demur.

“This isn’t about change. It’s about growth. Beta

Theta Pi isn’t coming from a state of depravity. It can simply be better.&quot;

Recognizing the sincere pain voiced by individuals of color, thousands of whom also wear the badge of Beta Theta Pi, on June 10 the 12-man body announced a unanimous decision — the establishment of a new Commission on Diversity, Equity and Inclusion. It was a first for the 181-year-old organization. Of course, most know Beta Theta Pi was founded on the belief that a man’s life is enriched when he joins kindred spirits who care for one another. Pledged to the notion that, “In Beta Theta Pi, brothers are brothers for life, and all stand on the same fraternal level,” from its inception Beta was uniquely void of White-Christian membership clauses that reinforced social segregation. Such policies were unfortunately common among Beta’s peers.

On one hand, Beta can be proud of individual and organizational actions that demonstrate the character of the Fraternity and its belief in the personal growth that comes to life when men break bread with those different from themselves. On the other, few can argue the Fraternity hasn’t had room for improvement in all aspects related to diversity, be it race, ethnicity, religion, sexual orientation, socio-economic status, etc., nor done all it could to help overcome societal barriers that undermine brotherhood and cultivation of the intellect.

Yet still, Beta Theta Pi has not been perfect nor inoculated from the world of which it is a part. 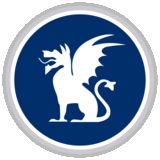