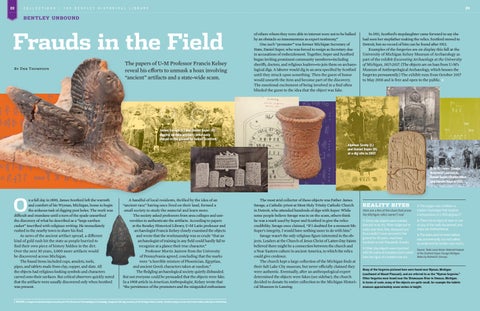 Frauds in the Field By Deb Thompson

The papers of U-M Professor Francis Kelsey reveal his efforts to unmask a hoax involving “ancient” artifacts and a state-wide scam.

of others whom they were able to interest were not to be balked by an obstacle so inmomentous as expert testimony.” One such “promoter” was former Michigan Secretary of State, Daniel Soper, who was forced to resign as Secretary due to accusations of embezzlement. Together, Soper and Scotford began inviting prominent community members—including sheriffs, doctors, and religious leaders—to join them on archaeological digs. A laborer would dig in an area specified by Scotford until they struck upon something. Then the guest of honor would unearth the item and become part of the discovery. The emotional excitement of being involved in a find often blinded the guest to the idea that the object was fake.

In 1911, Scotford’s stepdaughter came forward to say she had seen her stepfather making the relics. Scotford moved to Detroit, but no record of him can be found after 1912. Examples of the forgeries are on display this fall at the University of Michigan Kelsey Museum of Archaeology as part of the exhibit Excavating Archaeology at the University of Michigan, 1817-2017. (The objects are on loan from U-M’s Museum of Anthropological Archaeology, which houses the forgeries permanently.) The exhibit runs from October 2017 to May 2018 and is free and open to the public. n

n a fall day in 1890, James Scotford left the warmth and comfort of his Wyman, Michigan, home to begin the arduous task of digging post holes. The work was difficult and mundane until a turn of the spade unearthed the discovery of what he described as a “large earthen casket” inscribed with religious writing. He immediately rushed to the nearby town to share his find. As news of the ancient artifact spread, a different kind of gold rush hit the state as people hurried to find their own piece of history hidden in the dirt. Over the next 30 years, 3,000 more artifacts would be discovered across Michigan. The found items included cups, amulets, tools, pipes, and tablets made from clay, copper, and slate. All the objects had religious-looking symbols and characters carved onto their surfaces. But critical observers quickly noted that the artifacts were usually discovered only when Scotford was present.

A handful of local residents, thrilled by the idea of an “ancient race” having once lived on their land, formed a small society to study the material and learn more. The society asked professors from area colleges and universities to authenticate the artifacts. According to papers at the Bentley Historical Library, U-M Latin professor and archaeologist Francis Kelsey closely examined the objects and wrote that the workmanship was so crude “that an archaeologist of training in any field could hardly fail to recognize at a glance their true character.” Professor Morris Jastrow from the University of Pennsylvania agreed, concluding that the marks were “a horrible mixture of Phoenician, Egyptian, and ancient Greek characters taken at random.” The fledgling archaeological society quietly disbanded. But not everyone could be persuaded that the objects were fake. In a 1908 article in American Anthropologist, Kelsey wrote that “the persistence of the promoters and the misguided enthusiasm

Images of individual objects courtesy of U-M’s Museum of Anthropological Archaeology. Images of field digs courtesy of the Michigan History Center. All other imagery is from the Francis Kelsey collection at the Bentley.

The most avid collector of these objects was Father James Savage, a Catholic priest at Most Holy Trinity Catholic Church in Detroit, who attended hundreds of digs with Soper. While some people believe Savage was in on the scam, others think he was a mark used by Soper and Scotford to give the relics credibility. Savage once claimed, “If I doubted for a moment Mr. Soper’s integrity, I would have nothing more to do with him.” Savage wasn’t the only religious figure interested in the objects. Leaders at the Church of Jesus Christ of Latter-Day Saints believed there might be a connection between the church and a Near Eastern culture in ancient America, to which the relics could give credence. The church kept a large collection of the Michigan finds at their Salt Lake City museum, but never officially claimed they were authentic. Eventually, after an anthropological expert determined the objects were fakes (see sidebar), the church decided to donate its entire collection to the Michigan Historical Museum in Lansing.

Reality Bites Here are a few of the clues that prove the Michigan relics weren’t real:

&gt; Some clay objects were molded,

then left to air dry. When subjected to water over time, they dissolved and thus couldn’t have survived in the ground for 10 years, much less hundreds or even thousands of years.

&gt; Other clay objects were imprinted

with the marks of a wooden board, which bore the signs of a modern saw cut.

&gt; The copper was smelted—a

modern technique that requires a temperature of 2,200 degrees F˚.

&gt; There are no signs of wear or use on any of the tools discovered, and many are nonfunctional.

was commercially cut and milled, as evidenced by modern saw marks.

Many of the forgeries pictured here were found near Wyman, Michigan (southwest of Mount Pleasant), and are referred to as the “Wyman forgeries.” Other forgeries were found near the Shiawassee River in Owosso, Michigan. In terms of scale, many of the objects are quite small, for example the tablets measure approximately seven inches in height. 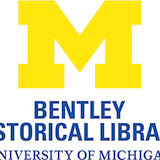