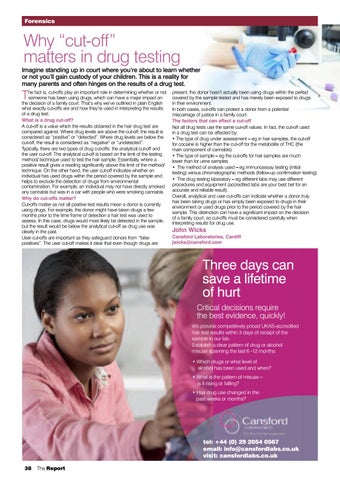 Why “cut-off” matters in drug testing Imagine standing up in court where you’re about to learn whether or not you’ll gain custody of your children. This is a reality for many parents and often hinges on the results of a drug test.

he fact is, cut-offs play an important role in determining whether or not someone has been using drugs, which can have a major impact on the decision of a family court. That’s why we’ve outlined in plain English what exactly cut-offs are and how they’re used in interpreting the results of a drug test. What is a drug cut-off? A cut-off is a value which the results obtained in the hair drug test are compared against. Where drug levels are above the cut-off, the result is considered as “positive” or “detected”. Where drug levels are below the cut-off, the result is considered as “negative” or “undetected”. Typically, there are two types of drug cut-offs: the analytical cut-off and the user cut-off. The analytical cut-off is based on the limit of the testing method/ technique used to test the hair sample. Essentially, where a positive result gives a reading significantly above the limit of the method/ technique. On the other hand, the user cut-off indicates whether an individual has used drugs within the period covered by the sample and helps to exclude the detection of drugs from environmental contamination. For example, an individual may not have directly smoked any cannabis but was in a car with people who were smoking cannabis. Why do cut-offs matter? Cut-offs matter as not all positive test results mean a donor is currently using drugs. For example, the donor might have taken drugs a few months prior to the time frame of detection a hair test was used to assess. In this case, drugs would most likely be detected in the sample, but the result would be below the analytical cut-off as drug use was clearly in the past. User cut-offs are important as they safeguard donors from “false positives”. The user cut-off makes it clear that even though drugs are

present, the donor hasn’t actually been using drugs within the period covered by the sample tested and has merely been exposed to drugs in their environment. In both cases, cut-offs can protect a donor from a potential miscarriage of justice in a family court. The factors that can affect a cut-off Not all drug tests use the same cut-off values. In fact, the cut-off used in a drug test can be affected by: • The type of drug under assessment – eg in hair samples, the cut-off for cocaine is higher than the cut-off for the metabolite of THC (the main component of cannabis) • The type of sample – eg the cut-offs for hair samples are much lower than for urine samples • The method of analysis used – eg immunoassay testing (initial testing) versus chromatographic methods (follow-up confirmation testing) • The drug testing laboratory – eg different labs may use different procedures and equipment (accredited labs are your best bet for an accurate and reliable result). Overall, analytical and user cut-offs can indicate whether a donor truly has been taking drugs or has simply been exposed to drugs in their environment or used drugs prior to the period covered by the hair sample. This distinction can have a significant impact on the decision of a family court, so cut-offs must be considered carefully when interpreting results for drug use.

Th hree days can sa ave a lifetime off hurt Critic cal decisions require the b best evidence, quickly! We provid de competitively priced UKAS-accredited hair test re esults within 3 days of receipt of the sample in our lab. Establish a clear pattern of drug or alcohol misuse sp panning the last 6 -12 months: • Which drugs or what level of alcohol has been used and when? • What is the pattern of misuse – is it risin ng or falling? • Has dru ug use cha anged in the past wee eks or mo onths?