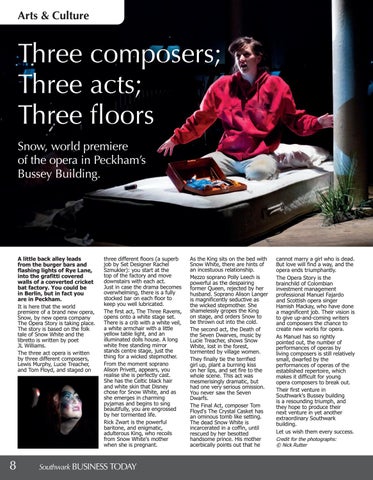 A little back alley leads from the burger bars and flashing lights of Rye Lane, into the grafitti covered walls of a converted cricket bat factory. You could be in Berlin, but in fact you are in Peckham. It is here that the world premiere of a brand new opera, Snow, by new opera company The Opera Story is taking place. The story is based on the folk tale of Snow White and the libretto is written by poet JL Williams. The three act opera is written by three different composers, Lewis Murphy, Lucie Treacher, and Tom Floyd, and staged on

three different floors (a superb job by Set Designer Rachel Szmukler): you start at the top of the factory and move downstairs with each act. Just in case the drama becomes overwhelming, there is a fully stocked bar on each floor to keep you well lubricated. The first act, The Three Ravens, opens onto a white stage set. There is a crib with a white veil, a white armchair with a little yellow table light, and an illuminated dolls house. A long white free standing mirror stands centre stage, just the thing for a wicked stepmother. From the moment soprano Alison Privett, appears, you realise she is perfectly cast. She has the Celtic black hair and white skin that Disney chose for Snow White, and as she emerges in charming pyjamas and begins to sing beautifully, you are engrossed by her tormented life. Rick Zwart is the powerful baritone, and enigmatic, adulterous King, who recoils from Snow White&#39;s mother when she is pregnant.

As the King sits on the bed with Snow White, there are hints of an incestuous relationship. Mezzo soprano Polly Leech is powerful as the despairing former Queen, rejected by her husband. Soprano Alison Langer is magnificently seductive as the wicked stepmother. She shamelessly gropes the King on stage, and orders Snow to be thrown out into the cold. The second act, the Death of the Seven Dwarves, music by Lucie Treacher, shows Snow White, lost in the forest, tormented by village women. They finally tie the terrified girl up, plant a burning kiss on her lips, and set fire to the whole scene. This act was mesmerisingly dramatic, but had one very serious omission. You never saw the Seven Dwarfs. The Final Act, composer Tom Floyd&#39;s The Crystal Casket has an ominous tomb like setting. The dead Snow White is incarcerated in a coffin, until rescued by her besotted handsome prince. His mother acerbically points out that he

cannot marry a girl who is dead. But love will find a way, and the opera ends triumphantly. The Opera Story is the brainchild of Colombian investment management professional Manuel Fajardo and Scottish opera singer Hamish Mackay, who have done a magnificent job. Their vision is to give up-and-coming writers and composers the chance to create new works for opera. As Manuel has so rightly pointed out, the number of performances of operas by living composers is still relatively small, dwarfed by the performances of operas of the established repertoire, which makes it difficult for young opera composers to break out. Their first venture in Southwark&#39;s Bussey building is a resounding triumph, and they hope to produce their next venture in yet another extraordinary Southwark building. Let us wish them every success. 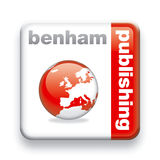