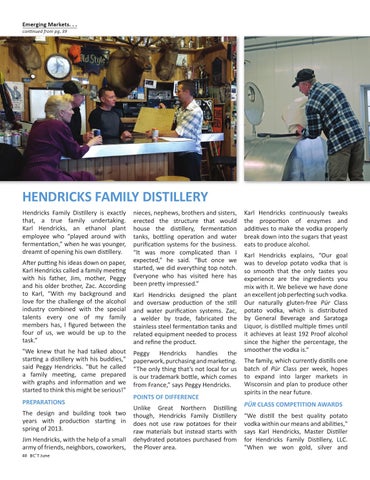 HENDRICKS FAMILY DISTILLERY Hendricks Family Distillery is exactly that, a true family undertaking. Karl Hendricks, an ethanol plant employee who “played around with fermentation,” when he was younger, dreamt of opening his own distillery. After putting his ideas down on paper, Karl Hendricks called a family meeting with his father, Jim, mother, Peggy and his older brother, Zac. According to Karl, “With my background and love for the challenge of the alcohol industry combined with the special talents every one of my family members has, I figured between the four of us, we would be up to the task.” &quot;We knew that he had talked about starting a distillery with his buddies,&quot; said Peggy Hendricks. &quot;But he called a family meeting, came prepared with graphs and information and we started to think this might be serious!&quot; PREPARATIONS The design and building took two years with production starting in spring of 2013. Jim Hendricks, with the help of a small army of friends, neighbors, coworkers, 40 BC�T June

nieces, nephews, brothers and sisters, erected the structure that would house the distillery, fermentation tanks, bottling operation and water purification systems for the business. “It was more complicated than I expected,” he said. “But once we started, we did everything top notch. Everyone who has visited here has been pretty impressed.” Karl Hendricks designed the plant and oversaw production of the still and water purification systems. Zac, a welder by trade, fabricated the stainless steel fermentation tanks and related equipment needed to process and refine the product. Peggy Hendricks handles the paperwork, purchasing and marketing. “The only thing that’s not local for us is our trademark bottle, which comes from France,” says Peggy Hendricks. POINTS OF DIFFERENCE Unlike Great Northern Distilling though, Hendricks Family Distillery does not use raw potatoes for their raw materials but instead starts with dehydrated potatoes purchased from the Plover area.

Karl Hendricks continuously tweaks the proportion of enzymes and additives to make the vodka properly break down into the sugars that yeast eats to produce alcohol. Karl Hendricks explains, “Our goal was to develop potato vodka that is so smooth that the only tastes you experience are the ingredients you mix with it. We believe we have done an excellent job perfecting such vodka. Our naturally gluten-free Pür Class potato vodka, which is distributed by General Beverage and Saratoga Liquor, is distilled multiple times until it achieves at least 192 Proof alcohol since the higher the percentage, the smoother the vodka is.“ The family, which currently distills one batch of Pür Class per week, hopes to expand into larger markets in Wisconsin and plan to produce other spirits in the near future. PÜR CLASS COMPETITION AWARDS “We distill the best quality potato vodka within our means and abilities,&quot; says Karl Hendricks, Master Distiller for Hendricks Family Distillery, LLC. &quot;When we won gold, silver and