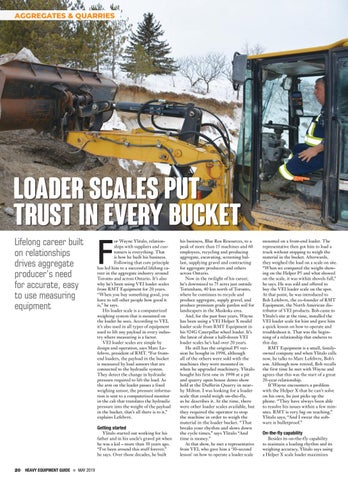 or Wayne Ylitalo, relationships with suppliers and customers is everything. That is how he built his business. Following that core principle has led him to a successful lifelong career in the aggregate industry around Toronto and across Ontario. It’s also why he’s been using VEI loader scales from RMT Equipment for 20 years. “When you buy something good, you have to tell other people how good it is,” he says. His loader scale is a computerized weighing system that is mounted on the loader he uses. According to VEI, it’s also used in all types of equipment used to lift any payload in every industry where measuring is a factor. VEI loader scales are simple by design and operation, says Marc Lefebvre, president of RMT. “For frontend loaders, the payload in the bucket is measured by load sensors that are connected to the hydraulic system. They detect the change in hydraulic pressure required to lift the load. As the arm on the loader passes a fixed weighing sensor, the pressure information is sent to a computerized monitor in the cab that translates the hydraulic pressure into the weight of the payload in the bucket, that’s all there is to it,” explains Lefebvre.

Ylitalo started out working for his father and in his uncle’s gravel pit when he was a kid – more than 50 years ago. “I’ve been around this stuff forever,” he says. Over those decades, he built 20

his business, Blue Rox Resources, to a peak of more than 15 machines and 60 employees, recycling and producing aggregate, excavating, screening ballast, supplying gravel and contracting for aggregate producers and others across Ontario. Now in the twilight of his career, he’s downsized to 75 acres just outside Tottenham, 40 km north of Toronto, where he continues to recycle and produce aggregate, supply gravel, and produce premium grade garden soil for landscapers in the Muskoka area. And, for the past four years, Wayne has been using a VEI Helper X model loader scale from RMT Equipment in his 924G Caterpillar wheel loader. It’s the latest of about a half-dozen VEI loader scales he’s had over 20 years. He still has the original P5 version he bought in 1998, although all of the others were sold with the machines they were mounted in when he upgraded machinery. Ylitalo bought his first one in 1998 at a pit and quarry open house demo show held at the Dufferin Quarry in nearby Milton. I was looking for a loader scale that could weigh on-the-fly, as he describes it. At the time, there were other loader scales available, but they required the operator to stop the machine in order to weigh the material in the loader bucket. “That breaks your rhythm and slows down the cycle times,” says Ylitalo “And time is money.” At that show, he met a representative from VEI, who gave him a ‘30-second lesson’ on how to operate a loader scale

mounted on a front-end loader. The representative then got him to load a truck without stopping to weigh the material in the bucket. Afterwards, they weighed the load on a scale on site. “When we compared the weight showing on the Helper P5 and what showed on the scale, it was within shovels full,” he says. He was sold and offered to buy the VEI loader scale on the spot. At that point, he was introduced to Bob Lefebvre, the co-founder of RMT Equipment, the North American distributor of VEI products. Bob came to Ylitalo’s site at the time, installed the VEI loader scale for him and gave him a quick lesson on how to operate and troubleshoot it. That was the beginning of a relationship that endures to this day. RMT Equipment is a small, familyowned company and when Ylitalo calls now, he talks to Marc Lefebvre, Bob’s son. Although now retired, Bob recalls the first time he met with Wayne and agrees that this was the start of a great 20-year relationship. If Wayne encounters a problem with the Helper X that he can’t solve on his own, he just picks up the phone. “They have always been able to resolve his issues within a few minutes. RMT is very big on teaching,” Ylitalo says, “And I swear the software is bulletproof.”

Besides its on-the-fly capability to maintain a loading rhythm and its weighing accuracy, Ylitalo says using a Helper X scale loader maximizes