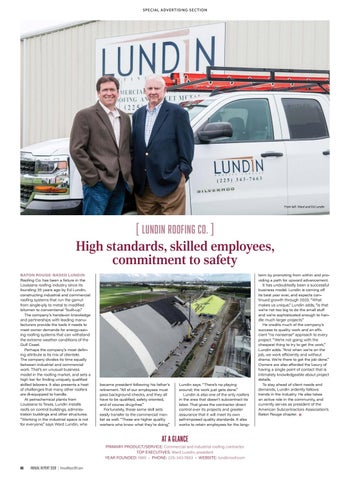 From left: Ward and Ed Lundin

[ LUNDIN ROOFING CO. ] High standards, skilled employees, commitment to safety BATON ROUGE-BASED LUNDIN Roofing Co. has been a fixture in the Louisiana roofing industry since its founding 35 years ago by Ed Lundin, constructing industrial and commercial roofing systems that run the gamut from single-ply to metal to modified bitumen to conventional “built-up.” The company’s hands-on knowledge and partnerships with leading manufacturers provide the tools it needs to meet owner demands for energy-saving roofing systems that can withstand the extreme weather conditions of the Gulf Coast. Perhaps the company’s most defining attribute is its mix of clientele. The company divides its time equally between industrial and commercial work. That’s an unusual business model in the roofing market, and sets a high bar for finding uniquely qualified skilled laborers. It also presents a host of challenges that many other roofers are ill-equipped to handle. At petrochemical plants from Louisiana to Texas, Lundin installs roofs on control buildings, administration buildings and other structures. “Working in the industrial space is not for everyone,” says Ward Lundin, who

became president following his father’s retirement. “All of our employees must pass background checks, and they all have to be qualified, safety oriented, and of course drug-free.” Fortunately, those same skill sets easily transfer to the commercial market as well. “These are higher quality workers who know what they’re doing,”

Lundin says. “There’s no playing around; the work just gets done.” Lundin is also one of the only roofers in the area that doesn’t subcontract its labor. That gives the contractor direct control over its projects and greater assurance that it will meet its own self-imposed quality standards. It also works to retain employees for the long-

term by promoting from within and providing a path for upward advancement. It has undoubtedly been a successful business model. Lundin is coming off its best year ever, and expects continued growth through 2020. “What makes us unique,” Lundin adds, “is that we’re not too big to do the small stuff and we’re sophisticated enough to handle much larger projects.” He credits much of the company’s success to quality work and an efficient “no nonsense” approach to every project. “We’re not going with the cheapest thing to try to get the work,” Lundin adds. “And when we’re on the job, we work efficiently and without drama. We’re there to get the job done.” Owners are also afforded the luxury of having a single point of contact that is intimately knowledgeable about project details. To stay ahead of client needs and demands, Lundin ardently follows trends in the industry. He also takes an active role in the community, and currently serves as president of the American Subcontractors Association’s Baton Rouge chapter.