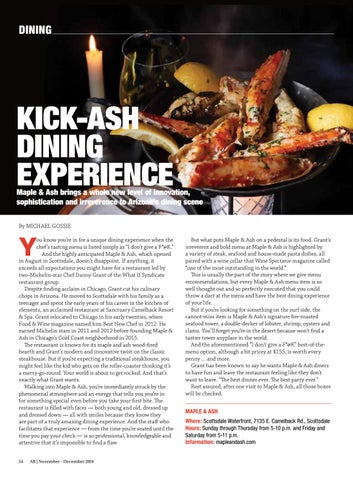 ou know you’re in for a unique dining experience when the chef’s tasting menu is listed simply as “I don’t give a F*@K.” And the highly anticipated Maple & Ash, which opened in August in Scottsdale, doesn’t disappoint. If anything, it exceeds all expectations you might have for a restaurant led by two-Michelin-star Chef Danny Grant of the What If Syndicate restaurant group. Despite finding acclaim in Chicago, Grant cut his culinary chops in Arizona. He moved to Scottsdale with his family as a teenager and spent the early years of his career in the kitchen of elements, an acclaimed restaurant at Sanctuary Camelback Resort & Spa. Grant relocated to Chicago in his early twenties, where Food & Wine magazine named him Best New Chef in 2012. He earned Michelin stars in 2011 and 2012 before founding Maple & Ash in Chicago’s Gold Coast neighborhood in 2015. The restaurant is known for its maple and ash wood-fired hearth and Grant’s modern and innovative twist on the classic steakhouse. But if you’re expecting a traditional steakhouse, you might feel like the kid who gets on the roller-coaster thinking it’s a merry-go-round. Your world is about to get rocked. And that’s exactly what Grant wants. Walking into Maple & Ash, you’re immediately struck by the phenomenal atmosphere and an energy that tells you you’re in for something special even before you take your first bite. The restaurant is filled with faces — both young and old, dressed up and dressed down — all with smiles because they know they are part of a truly amazing dining experience. And the staff who facilitates that experience — from the time you’re seated until the time you pay your check — is so professional, knowledgeable and attentive that it’s impossible to find a flaw. 34

But what puts Maple & Ash on a pedestal is its food. Grant’s irreverent and bold menu at Maple & Ash is highlighted by a variety of steak, seafood and house-made pasta dishes, all paired with a wine cellar that Wine Spectator magazine called “one of the most outstanding in the world.” This is usually the part of the story where we give menu recommendations, but every Maple & Ash menu item is so well thought out and so perfectly executed that you could throw a dart at the menu and have the best dining experience of your life. But if you’re looking for something on the surf side, the cannot-miss item is Maple & Ash’s signature fire-roasted seafood tower, a double-decker of lobster, shrimp, oysters and clams. You’ll forget you’re in the desert because won’t find a tastier tower anyplace in the world. And the aforementioned “I don’t give a F*@K” best-of-themenu option, although a bit pricey at $155, is worth every penny … and more. Grant has been known to say he wants Maple & Ash diners to have fun and leave the restaurant feeling like they don’t want to leave. “The best dinner ever. The best party ever.” Rest assured, after one visit to Maple & Ash, all those boxes will be checked. MAPLE & ASH Where: Scottsdale Waterfront, 7135 E. Camelback Rd., Scottsdale Hours: Sunday through Thursday from 5-10 p.m. and Friday and Saturday from 5-11 p.m. Information: mapleandash.com