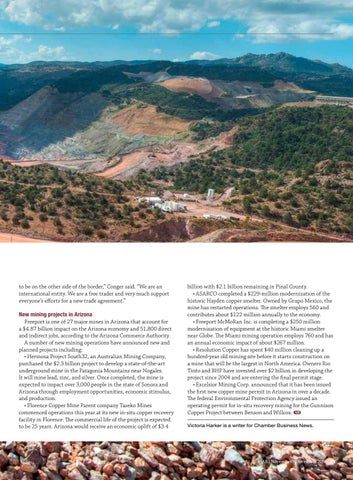 to be on the other side of the border,” Conger said. “We are an international entity. We are a free trader and very much support everyone’s efforts for a new trade agreement.” New mining projects in Arizona Freeport is one of 27 major mines in Arizona that account for a $4.87 billion impact on the Arizona economy and 51,800 direct and indirect jobs, according to the Arizona Commerce Authority. A number of new mining operations have announced new and planned projects including: • Hermosa Project South32, an Australian Mining Company, purchased the $2.3 billion project to develop a state-of-the-art underground mine in the Patagonia Mountains near Nogales. It will mine lead, zinc, and silver. Once completed, the mine is expected to impact over 3,000 people in the state of Sonora and Arizona through employment opportunities, economic stimulus, and production. • Florence Copper Mine Parent company Taseko Mines commenced operations this year at its new in-situ copper recovery facility in Florence. The commercial life of the project is expected to be 25 years. Arizona would receive an economic uplift of $3.4

billion with $2.1 billion remaining in Pinal County. • ASARCO completed a $229-million modernization of the historic Hayden copper smelter. Owned by Grupo Mexico, the mine has restarted operations. The smelter employs 560 and contributes about $122 million annually to the economy. • Freeport McMoRan Inc. is completing a $250 million modernization of equipment at the historic Miami smelter near Globe. The Miami mining operation employs 760 and has an annual economic impact of about $267 million. • Resolution Copper has spent $40 million cleaning up a hundred-year old mining site before it starts construction on a mine that will be the largest in North America. Owners Rio Tinto and BHP have invested over $2 billion in developing the project since 2004 and are entering the final permit stage. • Excelsior Mining Corp. announced that it has been issued the first new copper mine permit in Arizona in over a decade. The federal Environmental Protection Agency issued an operating permit for in-situ recovery mining for the Gunnison Copper Project between Benson and Willcox. Victoria Harker is a writer for Chamber Business News.