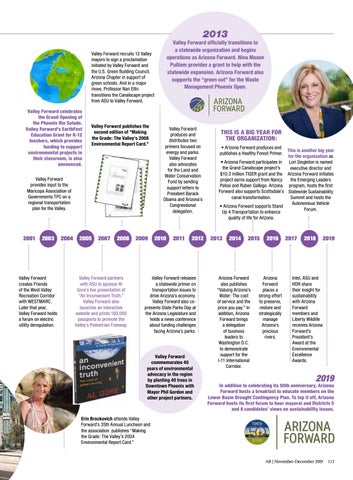 Valley Forward officially transitions to a statewide organization and begins operations as Arizona Forward. Nina Mason Pulliam provides a grant to help with the statewide expansion. Arizona Forward also supports the “green out” for the Waste Management Phoenix Open.

Valley Forward provides input to the Maricopa Association of Governments TPC on a regional transportation plan for the Valley.

Valley Forward commemorates 40 years of environmental advocacy in the region by planting 40 trees in Downtown Phoenix with Mayor Phil Gordon and other project partners.

THIS IS A BIG YEAR FOR THE ORGANIZATION: • Arizona Forward produces and This is another big year publishes a Healthy Forest Primer. for the organization as • Arizona Forward participates in Lori Singleton is named the Grand Canalscape project’s executive director and $10.3 million TIGER grant and the Arizona Forward initiates project earns support from Nancy the Emerging Leaders Pelosi and Ruben Gallego. Arizona program, hosts the first Forward also supports Scottsdale’s Statewide Sustainability canal transformation. Summit and hosts the Autonomous Vehicle • Arizona Forward supports Stand Forum. Up 4 Transportation to enhance quality of life for Arizona.

Arizona Forward also publishes “Valuing Arizona’s Water: The cost of service and the price you pay.” In addition, Arizona Forward brings a delegation of business leaders to Washington D.C. to demonstrate support for the I-11 International Corridor.