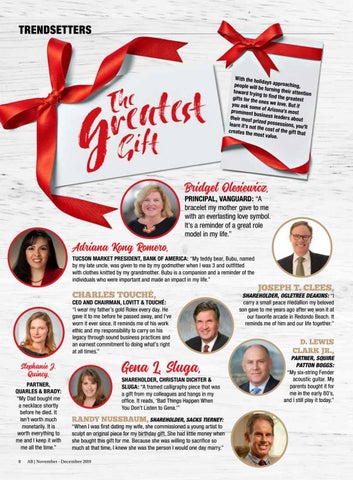 With the ho lidays appro aching, people will be turning their attenti toward tr yi on ng to find th e gre gif ts for the ones we love atest . But if you ask som e of Arizon a’s most prominent business le aders abou their most t prized poss essions, yo learn it’s no u’ll t the cost o f the gif t th creates the at most value.

PRINCIPAL, VANGUARD: “A bracelet my mother gave to me with an everlasting love symbol. It’s a reminder of a great role model in my life.”

Adriana Kong Romero, TUCSON MARKET PRESIDENT, BANK OF AMERICA: “My teddy bear, Bubu, named by my late uncle, was given to me by my godmother when I was 3 and outfitted with clothes knitted by my grandmother. Bubu is a companion and a reminder of the individuals who were important and made an impact in my life.”

CEO AND CHAIRMAN, LOVITT & TOUCHÉ: “I wear my father’s gold Rolex every day. He gave it to me before he passed away, and I’ve worn it ever since. It reminds me of his work ethic and my responsibility to carry on his legacy through sound business practices and an earnest commitment to doing what’s right at all times.”

Stephanie J. Quincy, PARTNER, QUARLES & BRADY: “My Dad bought me a necklace shortly before he died. It isn’t worth much monetarily. It is worth everything to me and I keep it with me all the time.” 8

SHAREHOLDER, CHRISTIAN DICHTER & SLUGA: “A framed calligraphy piece that was a gift from my colleagues and hangs in my office. It reads, ‘Bad Things Happen When You Don’t Listen to Gena.’”

“When I was first dating my wife, she commissioned a young artist to sculpt an original piece for my birthday gift. She had little money when she bought this gift for me. Because she was willing to sacrifice so much at that time, I knew she was the person I would one day marry.”

SHAREHOLDER, OGLETREE DEAKINS: “I carry a small peace medallion my beloved son gave to me years ago after we won it at our favorite arcade in Redondo Beach. It reminds me of him and our life together.”

PARTNER, SQUIRE PATTON BOGGS: “My six-string Fender acoustic guitar. My parents bought it for me in the early 80’s, and I still play it today.”