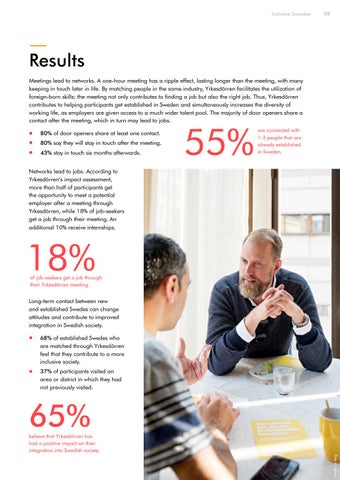 Results Meetings lead to networks. A one-hour meeting has a ripple effect, lasting longer than the meeting, with many keeping in touch later in life. By matching people in the same industry, Yrkesdörren facilitates the utilization of foreign-born skills: the meeting not only contributes to finding a job but also the right job. Thus, Yrkesdörren contributes to helping participants get established in Sweden and simultaneously increases the diversity of working life, as employers are given access to a much wider talent pool. The majority of door openers share a contact after the meeting, which in turn may lead to jobs. •

80% say they will stay in touch after the meeting.

are connected with 1-3 people that are already established in Sweden.

Networks lead to jobs. According to Yrkesdörren’s impact assessment, more than half of participants get the opportunity to meet a potential employer after a meeting through Yrkesdörren, while 18% of job-seekers get a job through their meeting. An additional 10% receive internships.

of job-seekers get a job through their Yrkesdörren meeting.

Long-term contact between new and established Swedes can change attitudes and contribute to improved integration in Swedish society. •

68% of established Swedes who are matched through Yrkesdörren feel that they contribute to a more inclusive society.

37% of participants visited an area or district in which they had not previously visited.

believe that Yrkesdörren has had a positive impact on their integration into Swedish society.