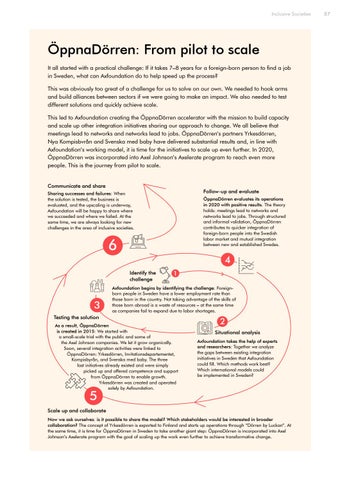 ÖppnaDörren: From pilot to scale It all started with a practical challenge: If it takes 7–8 years for a foreign-born person to find a job in Sweden, what can Axfoundation do to help speed up the process? This was obviously too great of a challenge for us to solve on our own. We needed to hook arms and build alliances between sectors if we were going to make an impact. We also needed to test different solutions and quickly achieve scale. This led to Axfoundation creating the ÖppnaDörren accelerator with the mission to build capacity and scale up other integration initiatives sharing our approach to change. We all believe that meetings lead to networks and networks lead to jobs. ÖppnaDörren’s partners Yrkesdörren, Nya Kompisbvrån and Svenska med baby have delivered substantial results and, in line with Axfoundation’s working model, it is time for the initiatives to scale up even further. In 2020, ÖppnaDörren was incorporated into Axel Johnson’s Axelerate program to reach even more people. This is the journey from pilot to scale.

Sharing successes and failures: When the solution is tested, the business is evaluated, and the upscaling is underway, Axfoundation will be happy to share where we succeeded and where we failed. At the same time, we are always looking for new challenges in the area of inclusive societies.

ÖppnaDörren evaluates its operations in 2020 with positive results. The theory holds: meetings lead to networks and networks lead to jobs. Through structured and informal validation, ÖppnaDörren contributes to quicker integration of foreign-born people into the Swedish labor market and mutual integration between new and established Swedes.

Axfoundation begins by identifying the challenge: Foreignborn people in Sweden have a lower employment rate than those born in the country. Not taking advantage of the skills of those born abroad is a waste of resources – at the same time as companies fail to expand due to labor shortages.

Testing the solution As a result, ÖppnaDörren is created in 2015: We started with a small-scale trial with the public and some of the Axel Johnson companies. We let it grow organically. Soon, several integration activities were linked to ÖppnaDörren: Yrkesdörren, Invitationsdepartementet, Kompisbyrån, and Svenska med baby. The three last initiatives already existed and were simply picked up and offered competence and support from ÖppnaDörren to enable growth. Yrkesdörren was created and operated solely by Axfoundation.

2 Situational analysis Axfoundation takes the help of experts and researchers: Together we analyze the gaps between existing integration initiatives in Sweden that Axfoundation could fill. Which methods work best? Which international models could be implemented in Sweden?

Scale up and collaborate Now we ask ourselves: is it possible to share the model? Which stakeholders would be interested in broader collaboration? The concept of Yrkesdörren is exported to Finland and starts up operations through “Dörren by Luckan”. At the same time, it is time for ÖppnaDörren in Sweden to take another giant step: ÖppnaDörren is incorporated into Axel Johnson’s Axelerate program with the goal of scaling up the work even further to achieve transformative change.