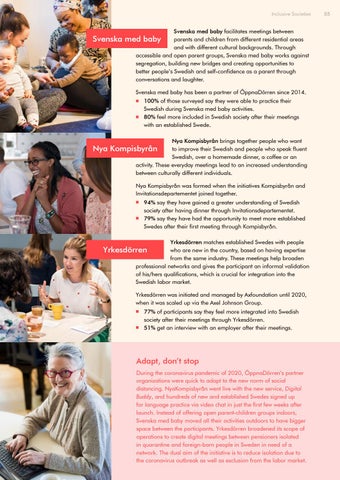 Svenska med baby has been a partner of ÖppnaDörren since 2014.

• 100% of those surveyed say they were able to practice their Swedish during Svenska med baby activities. • 80% feel more included in Swedish society after their meetings with an established Swede. Nya Kompisbyrån brings together people who want to improve their Swedish and people who speak fluent Kompisbyrån Swedish, over a homemade dinner, a coffee or an activity. These everyday meetings lead to an increased understanding between culturally different individuals.

Nya Kompisbyrån was formed when the initiatives Kompisbyrån and Invitationsdepartementet joined together. • 94% say they have gained a greater understanding of Swedish society after having dinner through Invitationsdepartementet. • 79% say they have had the opportunity to meet more established Swedes after their first meeting through Kompisbyrån. Yrkesdörren matches established Swedes with people who are new in the country, based on having expertise from the same industry. These meetings help broaden professional networks and gives the participant an informal validation of his/hers qualifications, which is crucial for integration into the Swedish labor market.

Yrkesdörren was initiated and managed by Axfoundation until 2020, when it was scaled up via the Axel Johnson Group. • 77% of participants say they feel more integrated into Swedish society after their meetings through Yrkesdörren. • 51% get an interview with an employer after their meetings.

Adapt, don’t stop During the coronavirus pandemic of 2020, ÖppnaDörren’s partner organizations were quick to adapt to the new norm of social distancing. NyaKompisbyrån went live with the new service, Digital Buddy, and hundreds of new and established Swedes signed up for language practice via video chat in just the first few weeks after launch. Instead of offering open parent-children groups indoors, Svenska med baby moved all their activities outdoors to have bigger space between the participants. Yrkesdörren broadened its scope of operations to create digital meetings between pensioners isolated in quarantine and foreign-born people in Sweden in need of a network. The dual aim of the initiative is to reduce isolation due to the coronavirus outbreak as well as exclusion from the labor market.