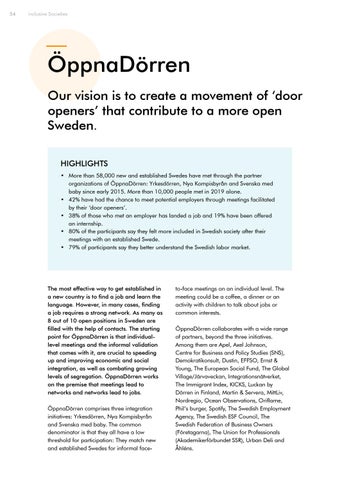 ÖppnaDörren Our vision is to create a movement of ‘door openers’ that contribute to a more open Sweden. HIGHLIGHTS • More than 58,000 new and established Swedes have met through the partner organizations of ÖppnaDörren: Yrkesdörren, Nya Kompisbyrån and Svenska med baby since early 2015. More than 10,000 people met in 2019 alone. • 42% have had the chance to meet potential employers through meetings facilitated by their ‘door openers’. • 38% of those who met an employer has landed a job and 19% have been offered an internship. • 80% of the participants say they felt more included in Swedish society after their meetings with an established Swede. • 79% of participants say they better understand the Swedish labor market.

The most effective way to get established in a new country is to find a job and learn the language. However, in many cases, finding a job requires a strong network. As many as 8 out of 10 open positions in Sweden are filled with the help of contacts. The starting point for ÖppnaDörren is that individuallevel meetings and the informal validation that comes with it, are crucial to speeding up and improving economic and social integration, as well as combating growing levels of segregation. ÖppnaDörren works on the premise that meetings lead to networks and networks lead to jobs. ÖppnaDörren comprises three integration initiatives: Yrkesdörren, Nya Kompisbyrån and Svenska med baby. The common denominator is that they all have a low threshold for participation: They match new and established Swedes for informal face-

to-face meetings on an individual level. The meeting could be a coffee, a dinner or an activity with children to talk about jobs or common interests. ÖppnaDörren collaborates with a wide range of partners, beyond the three initiatives. Among them are Apel, Axel Johnson, Centre for Business and Policy Studies (SNS), Demokratikonsult, Dustin, EFFSO, Ernst &amp; Young, The European Social Fund, The Global Village/Järvaveckan, Integrationsnätverket, The Immigrant Index, KICKS, Luckan by Dörren in Finland, Martin &amp; Servera, MittLiv, Nordregio, Ocean Observations, Oriflame, Phil’s burger, Spotify, The Swedish Employment Agency, The Swedish ESF Council, The Swedish Federation of Business Owners (Företagarna), The Union for Professionals (Akademikerförbundet SSR), Urban Deli and Åhléns.