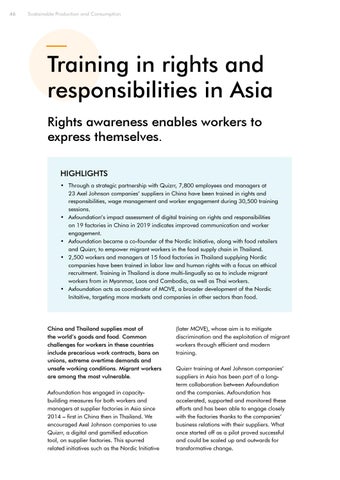 Training in rights and responsibilities in Asia Rights awareness enables workers to express themselves. HIGHLIGHTS • Through a strategic partnership with Quizrr, 7,800 employees and managers at 23 Axel Johnson companies’ suppliers in China have been trained in rights and responsibilities, wage management and worker engagement during 30,500 training sessions. • Axfoundation’s impact assessment of digital training on rights and responsibilities on 19 factories in China in 2019 indicates improved communication and worker engagement. • Axfoundation became a co-founder of the Nordic Initiative, along with food retailers and Quizrr, to empower migrant workers in the food supply chain in Thailand. • 2,500 workers and managers at 15 food factories in Thailand supplying Nordic companies have been trained in labor law and human rights with a focus on ethical recruitment. Training in Thailand is done multi-lingually so as to include migrant workers from in Myanmar, Laos and Cambodia, as well as Thai workers. • Axfoundation acts as coordinator of MOVE, a broader development of the Nordic Initaitive, targeting more markets and companies in other sectors than food.

China and Thailand supplies most of the world’s goods and food. Common challenges for workers in these countries include precarious work contracts, bans on unions, extreme overtime demands and unsafe working conditions. Migrant workers are among the most vulnerable. Axfoundation has engaged in capacitybuilding measures for both workers and managers at supplier factories in Asia since 2014 – first in China then in Thailand. We encouraged Axel Johnson companies to use Quizrr, a digital and gamified education tool, on supplier factories. This spurred related initiatives such as the Nordic Initiative

(later MOVE), whose aim is to mitigate discrimination and the exploitation of migrant workers through efficient and modern training. Quizrr training at Axel Johnson companies’ suppliers in Asia has been part of a longterm collaboration between Axfoundation and the companies. Axfoundation has accelerated, supported and monitored these efforts and has been able to engage closely with the factories thanks to the companies’ business relations with their suppliers. What once started off as a pilot proved successful and could be scaled up and outwards for transformative change.